We Are At War And Together We’Ll Win: Pm’S Battle Plan To Fight Deadly Virus 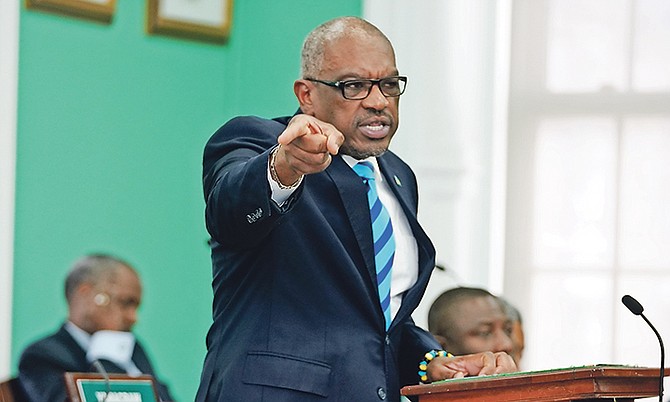 Dr Minnis yesterday announced in the House that the country has recorded its second and third confirmed cases of COVID-19 Photo: Terrel W Carey Sr/Tribune Staff

“The new emergency measures we are enacting are to save lives and to protect our country and only those that are against such measures are not interested in lives nor are they interested in their country,” he said in the House of Assembly, a day after Governor General Cornelius Smith issued a proclamation of emergency that allowed him to enact the new regulations.

Dr Minnis announced that the country recorded its second and third confirmed cases of COVID-19 on Tuesday, who were identified through contact tracing.

He said contact tracing of the first confirmed case, a 61-year-old New Providence woman with no recent travel history, also revealed her household members travelled to areas with known community spread – Canada, Trinidad and Dubai. These household contacts have been quarantined and samples taken for testing.

He said if necessary, he will join medical professionals on the frontline of the fight against the coronavirus. “I am encouraged sometimes to put on my white medical coat and go and assist those and work with my colleagues with whom I have trained with and depending on the state of our society and the assistance that is needed, I will work with my medical colleagues and do what I have been trained to do,” he said.

He acknowledged the extreme nature of the new regulations but urged people not to panic.

“Some of these provisions may be invoked, some may not,” he said. “I understand the suffering and the pain that our country might experience with such provisions but we have seen countries that try to balance the smooth running by isolating just segments while allowing the spread to continue and find themselves in the wrong situation or a nightmare that they could have never dreamt of. We’ve also learned that drastic measures may stop the spread of this virus and may assist us in winning this war. Yes it might be painful but as an obstetrician/gynaecologist it reminds me of watching women in labour and watching the pain that they experience while they are in labour. But immediately after the birth of that baby, I watch the joy in their face, knowing that they have made a contribution to the future of their country. I’m not making a comparison but what I’m saying is it may be painful, but it won’t be painful for few, it will be painful for each and every one one of us and we could only succeed and win this battle if each and every one of us act responsible and do our part.”

The regulations give the prime minister the power to prohibit the assembly of two or more people in a public place in any area specified in the interest of public safety. He would be able to close educational, business or religious organisations that cater to the general public in specified areas where isolation has been imposed.

He could require people to confine themselves to their place of residence and enclosed property and could permit the travel of people only to grocery stores, gas stations, pharmacies, a doctor’s office, hospital or another place he specifies.

He can establish a curfew, ordering everyone within an area to remain indoors between specified hours. The regulations empower health officers to detain people for screening and assessment when they believe a person is or may be infected or contaminated with COVID-19 and might infect someone else.

And the prime minister could waive the application of any rules or law governing the procurement of goods and services. Dr Minnis, who campaigned on heightening transparency and accountability in how goods and services are procured, said this power would be essential, using an example of what happened when he spoke to Doctors Hospital officials about the cost of securing their facility on Blake Road to treat COVID-19 patients. According to him, hospital officials said: “We need not discuss any cost. Let’s just get the facility ready and when this country comes out of what we’re going through, we can talk, but at this point in time we are all on board and whatever can be done we are prepared to do.”

Meanwhile, the Progressive Liberal Party is urging the government to cautiously exercise its new powers and not overreach on civil liberties.

“Our party intends to watch and monitor carefully the exercise of these extraordinary powers to be sure that these powers are used for the benefit of the Bahamian people,” PLP leader Philip Davis said. “I however note that to date, there has been no reported case of non-compliance by Bahamians to any guideline and public service announcement issued by the government on COVID-19. We commend them for their continued cooperation. In light of this, the opposition cautions the government not to overreach on our civil liberties.

“. . .To facilitate the eradication COVID-19, the government should strongly consider accessing the retroviral drug Interferon A-B2 through the government of the Republic of Cuba. I advise that The Bahamas government access Interferon A-B2 through the regional bloc of CARICOM as part of our successful programme of functional cooperation on health, national emergencies and disaster management. There are also economies of scale that can be exploited or realised through this procurement process. I raise these critical issues to underscore the need for all of us to be prepared and to leave no stone unturned in this national fight,” Mr Davis said.

Now we see the danger of allowing people in office with authoritarian tendencies. Why are we always a bit late to important functions?

Right thinking Bahamians should be concerned about an unconstitutional breach of our civil liberties.

Someone should advise Mr Davis that interferon is not an antiviral drug and cannot help to eradicate Covid 19! A simple Google search reveals that info!

Just take a good look at Minnis's facial expression and pointed finger in the photo to this article. He must have had some serious childhood issues. His arrogance, nastiness and propensity for bullying and threatening others are obviously self-defensive mechanisms he long ago put in place to mask his incompetence born out of diminished intellectual prowess and a complete lack of common sense. Small wonder the most frightening thought for many Bahamians right now is this guy having emergency powers over our country and its people.

Hmmmmm....on the finger pointing, look at the good side in that the finger isnt pointing upwards like the previous Prime Minister using his finger. LOL

Minnis wearing his doctor's hat is aware of the amount of Bahamians that could die if new emergency measures are not enacted soon to avoid the resulting deaths that is taking place now in Italy and Iran. It is very important that the Bahamas implement protective measures at this time or we will never have a tourism industry again. We must flatten the curve because of the cases of the corona virus we have discovered so far with protective measures. We must not let the virus get to the point in the Bahamas where doctors have to choose to let the old die because the cases have overwhelmed the health care system.

And when the Red China Virus caused deaths begin, Minnis and Sands will start pointing their respective index fingers at each other and we all know from the photo of Minnis above who is likely to win that finger pointing war.

That's funny because I'm relentlessly saying the samething about Minnis and his cabinet of misfits who are suppose to be governing our country.

It has pain the most prolific bloggers to these hereto Tribune pages that they being unable lay blame for the new coronoavirus at the feet of the Haitian community - must now seek out a new group comrades to target profile with their venom littered posts - we Colony's Chinese community. Father, forgive them not. There can be no Alter for Forgiveness for them knoweth - precisely the why and what they sayeth!

Nope.......Haitians are innocent in this issue.

The illegal Haitian aliens will be flooding our healthcare system as they have always done whenever they get seriously ill.