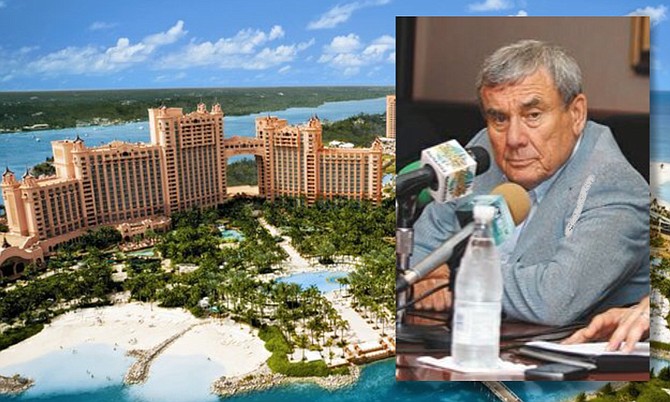 Sol Kerzner was the developer of the Atlantis resort on Paradise Island.

THE UPDATED VERSION OF THIS STORY CAN BE FOUND HERE

He had been battling cancer and passed away at the Kerzner family home in Cape Town, South Africa.

In a statement, Prime Minister Dr Hubert Minnis said he left an indelible and lasting imprint on The Bahamas.

“It is with profound sadness that The Bahamas mourns the death of Sol Kerzner, who died today at 84 at his family home in his native South Africa,” Dr Minnis said.

“On behalf of the Government and people of The Bahamas, and on my own behalf and that of Patricia, I offer condolences to Sol’s children, family, friends and colleagues.

“Sol Kerzner was a global citizen who founded South Africa’s largest hotel groups. A maverick businessman and personality he was known for his creative genius and intrepid spirit of innovation.

“He was the Founder, Chairman and CEO of Kerzner International, which for many years was the principal owner of the iconic Atlantis Resort on Paradise Island, Bahamas. He was also Founder of One&Only Resorts, a global brand which included a world-class luxury property on Paradise Island.

“For nearly half a century he was a pioneer in the resort industry globally and helped to redevelop and transform tourism in The Bahamas. He left an indelible and lasting imprint on The Bahamas, which he loved and which he considered a second home.

“In the Queen’s 2010 Birthday Honours list he was honoured with an honorary knighthood, ‘with the award of the insignia Knight Commander of the Most Distinguished Order of St. Michael and St. George (KCMG).’

“No history of the modern and independent Bahamas would be complete without reference to the positive and pervasive impact that Sol Kerzner had on the social and economic development of The Bahamas.

“More than 30 years ago, this visionary and creative force of a man arrived in The Bahamas with grand ideas at a time when Bahamas tourism needed to emerge from the doldrums.

“Despite opposition from some quarters, Kerzner and the government of the day collaborated in the rejuvenation of tourism in The Bahamas.

“The size, the scope, the financial commitment and the nature of his investments were such statements of confidence in our country that they shone a new light on The Bahamas, which endures.

“The genius of the Atlantis resort project theme took full advantage of the unequalled reputation that The Bahamas already had for the clarity of our waters and the magnificence of our beaches.

“Atlantis quickly became one of the great resort wonders of the world.

“Indeed, some of its construction techniques were so innovative that Bahamian entrepreneurs who acquired the skills later afforded those newfound skills to developments in several other countries. Sol Kerzner helped to nurture Bahamian talent and expertise at every level.

“The number of Bahamians employed directly on Paradise Island because of Sol Kerzner grew from slightly more than 3,000 to nearly 8,000 and is, by far, the largest private employer in the history of The Bahamas.

“While The Bahamas claims Sol Kerzner as an important contributor to our social and economic development, we long recognized that he belonged to the world.

“Even as we mourn his passing, we celebrate Sol Kerzner’s tremendous contributions to The Bahamas and to many countries throughout the world.

Former Prime Minister Hubert Ingraham paid tribute to the “understated millionaire” who “transformed tourism as we knew it in The Bahamas.”

“I was greatly saddened to learn of the passing of Sol Kerzner after a long illness,” Mr Ingraham said in a statement.

“Sol came to The Bahamas as a major investor in our tourism sector in 1994.  He became a great believer in The Bahamas and one of our biggest and most effective promoters.

“Sol, the personable and understated multimillionaire who twisted ‘worry beads’ between his fingers as he spoke, transformed tourism as we knew it in The Bahamas.

“He created a tourism product at Atlantis which appealed to an upscale Fortune 500 clientele and redefined our luxury hotel experiences first at the One and Only Ocean Club and later at the Cove, the premier adult hotel property at Kerzner International under his leadership.

“Sol, opened many, many opportunities for Bahamians - contractors and other professionals - engineers and architects as well as for fine artists, manufacturers, skilled artisans and small businesses providing goods and services to his hotels.  The transfer of skills between foreign skilled workers and the Bahamian workforce engaged in the construction of Sun International (later Kerzner International) hotel properties and attractions on Paradise Island continue to benefit our country today.

“His success on Paradise Island encouraged investments and upgrades throughout our tourism sector and convinced many other investors to expand existing investments in The Bahamas or to come The Bahamas for the first time.

“His signature brand has been copied internationally, notably in Dubai where the Atlantis Towers have been duplicated.  His mega aquarium served no doubt as inspiration for the water theme park now under development at Baha Mar.

“I was privileged to have had a hand in our country’s recognition of his significant contribution through the award of a knighthood bestowed by Her Majesty the Queen with the agreement of his country, the Republic of South Africa.  I recall that in granting the Government of South Africa’s consent to his honour by another Commonwealth State, the then President of South Africa commented that they were themselves honoured to have one of their nationals recognized and held in such great esteem by us.

“Sol was a true friend of The Bahamas. His name and reputation will long be remembered by those of us who knew him and the thousands who served in his resort properties on Paradise Island.  Atlantis will forever be his legacy here regardless to its new ownership or management.

“On my and my wife Delores’ behalf I extend heartfelt condolences to Sol’s children and grandchildren.  May he rest in peace.”

There's a lot one could say here but why bother......all of the many great negatives for our country associated with the Atlantis property are too well known and have been mirrored by the Baha Mar property. Thousands of Bahamians employed by multiple much smaller hotel properties would have been infinitely better than the Atlantis/Baha Mar business model. That's just common sense. Kerzner got every conceivable concession imaginable, made a fortune the greater portion of which was repatriated abroad, and then abandoned the Bahamas and the Bahamian people for Dubai at the most opportune time.

But you can't fault Kezner as an astute businessman with a keen sense of timing for taking full advantage of our brain-dead governments led by Ingraham and Christie alike. They were both fools well played by Kerzner for his benefit much more so than the benefit of the Bahamian people. Now we have to contend with most of our country's fragile economic eggs having been foolishly put by Minnis in the very greedy and profiteering basket of the foreign cruise ship companies. Not a pretty picture from the standpoint of grave economic vulnerability for the vast majority of Bahamians going forward.

Comrade Hotelier Sol Kerzner's 30 plus years in we Colony of 700 Out Islands and Cays, constitutes big chunk of his life's remarkable 84 years. RIP Salute Comrade Sol!

20 years. He bailed out of the Bahamas almost a decade ago.