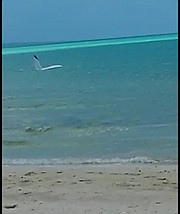 Police are investigating after a plane crashed in waters off Eleuthera Island on Saturday afternoon. There were no injuries.

According to reports, shortly before 2pm, the twin engine aircraft, registration # N14178, crashed into the sea near the settlement of Bouge, with three people on board.

The matter will be referred to the Air Accident Investigation Department for further investigation.

Excellent ...no injuries on ditching...seems just like US pilot Sully in New York after flying geese hitting engines and Sully with experience at gliding landed jet in river and no casualities.

Glad to see the pilot kept his cool and got it into the water safely. Sometimes it's the only option.