Insight: Pray Our Government Is Getting This Right Because The Alternative Is Terrifying 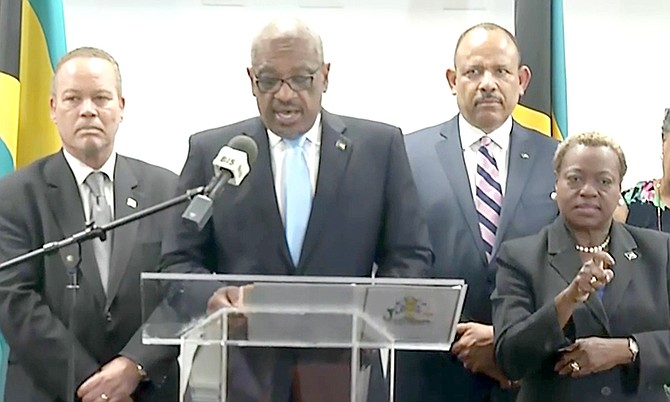 IF there is anything valuable we’ve learned since COVID-19 launched its deadly onslaught on at least 186 countries, amassing more than 276,000 cases and causing over 11,000 deaths, it is that timing is everything. The Bahamas has been blessed with the good fortune of witnessing the mistakes made by other countries and is acting at what may prove to be the optimal time.

While much larger, more developed countries have underestimated the devastation this virus is capable of, The Bahamas government exhibited great poise by not being too quick on the trigger. As the virus exploded in China and then made its trek through Europe, wreaking havoc in Italy and then Spain, Bahamians watched and waited. And sure enough as the end of February arrived, and our northern neighbour and source of nearly six million tourists annually, the United States, confirmed its first cases of the coronavirus, we knew it would only be matter of time before we were battling with our own first case.

Two weeks later, those fears would become reality as “Patient 1”, a 61-year-old Bahamian woman with no travel history in the 21 days prior to testing, was confirmed positive for having COVID-19. Later in the week, three members of her family also tested positive after having contracted the virus on recent travels.

Subsequent to the initial case, what followed was a series of steps which may not perfect and are likely to force citizens to live outside of their comfort zones for a period of time, but may serve as the difference between life and death.

Italy, the new epicentre of the pandemic and most recent case study of how other countries should not approach this virus, is still suffering the ramifications of a multitude of missteps that could have been avoided much earlier. After witnessing the Chinese struggle to gain control of the spread of the virus - leading them to enforce aggressive draconian measures - Italy’s mild approach led to a rise in cases of epic proportions.

With nearly 5,000 of its citizens dead as a result of succumbing to COVID-19, overwhelmed Italian doctors are grappling with difficult choices – choosing who lives and who dies between the young and old. At the time this article was written, Italy recorded its highest death toll in one day (793) over the weekend, leaving no question that they are certainly still in the thick of things.

Imagine if The Bahamas was in a similar scenario – a nation with strong attachments to its older generation. I shudder at the thought of the inexplicable grief that would befall families all over this nation.

Say what you will for China’s part, an aggressive approach is exactly what has led to them reporting no new cases of COVID-19 domestically for the first time since it began in February just last week. Only seeing new cases as a result of residents and nationals returning home, they proved what they did worked for them.

While it is doubtful that our government would employ some of the tactics the Chinese did, we certainly learned that to beat this virus and blunt the curve, very strict measures would have to be enforced.

Thankfully, the policy makers had the mettle to install them.

With the release of a compendium of prevention measures in line with what many medical experts the world over are advising, border restrictions, a national curfew and social distancing have become the country’s new normal – at least for the time being. A complete deviation from our way of life, a society that is sometimes too familiar with one another is being asked to remain in the confines of their homes for a period of two weeks and maybe even longer if the government determines it to be necessary. An economy built on tourism, for the first time in who knows how long, may be forced to rethink industries and drive more insulated streams of revenue to safeguard in times such as these.

The social impact has been so disruptive for a populace still trying to make sense of life between one hurricane season and on the eve of another. Without a doubt, it can often feel like too much.

Funerals are being postponed. Wedding plans are being upended. Employees are being laid off. It is utter madness that we are experiencing in such unprecedented times.

With tourism all but collapsed, if the vacant store fronts on Bay Street are any indicator of what the short-to-medium term is going to look like, we ought to brace ourselves. We are in for a ride.

And oddly enough, unlike any other time of uncertainty, the government seems steady and controlled. Their action plan, though not without a hitch, is seemingly unfolding in a methodical fashion. Moreover, what has been encouraging is the anecdotes from those that have seen the worst of the virus and survived to give an account. Although China has caught a lot of flak in the media for its measures in gaining control of the spread of the virus, the tactics they employed may have saved its people. And in hindsight, it would seem as though many of them feel a debt of gratitude for the actions of its government.

At the same time as Italy - a country slower to act - is now quarantining its population of 60 million people in effect by locking down the entire country, many believe these measures are being taken too late.

A 35-year-old editor from the Hubei Province – 75 km from Wuhan, the epicentre of the pandemic - who commented in a Market Watch article posited that many countries will lose many people for fear of employing policies what some would deem as extreme. “My concern is that Western countries will have a longer battle with this disease, because they put their personal rights higher than the good of the group,” he said.

Certainly, the complaints from the Bahamian people have been coming out fast and furious. And surely, the inconveniences are real and understandable.

But a word to the wise is sufficient – it is better to have short-term discomfort than long-term disaster.

Let’s do ourselves a favour and follow what the government has mandated, and let’s come out of this a stronger, more innovative, more resilient Bahamas.

We need to extend this shutdown and ensure schools are kept closed, otherwise we risk losing all we have gained and may have a rapid increase in cases.

Thank you, PM for being bold enough to do what should have been done 2 weeks ago!

The possible disastrous alternative for any further delay would be unimaginably more costly than a proactive "controlled" shut down.

Thank GOD Perry Christie, Brave Davis, and the PLP dancers are not in control of the country now!!!

2 weeks ago - are you kidding?! There were many things that should have been done over 6 weeks ago.

We must be careful what we wish for now. Having failed two months ago to adopt stringent containment measures at our borders and all air and sea ports, the Minnis-led government's enforcement of a total isolation policy may be worse for our people and the country's economy than just letting the Red China Virus run its course.

Even President Trump refused to go the Red China way for fear of igniting mass panic, rioting and crime all across the US. Let's hope Minnis is not listening to representatives of the ruthless Xi-led communist regime. As President Trump put it: "We cannot let the cure be worse than the problem itself." And many of us know what President Franklin D. Roosevelt had to say about "Fear".

Ordering de facto outright Marshall Law in any of today's much more open societies is often the first step in a failed state's transformation to a police state. Let's just hope that Minnis does not next order that TV and internet services be shut down in an effort to stifle all criticism and have the state totally control the narrative.

Are the pharmacies being kept open and will Bahamians and other residents be able to obtain their necessary medications and other medical supplies? In any event, whatever is left open will now be greatly over-crowded to the point where most senior citizens will find it next to impossible to stand in the long lines and contend with all of the hustle and bustle.