Media will be free to carry out its work 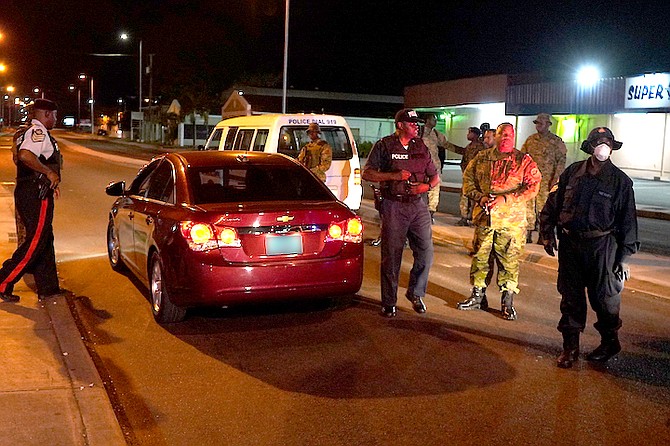 Police on the streets of New Providence during the curfew on Friday night.

PRIME Minister Dr Hubert Minnis yesterday stressed the emergency orders he put in place last week allows for the free movement of the media. He released a statement after a police officer denied a local media company access to the streets of New Providence on Saturday during curfew hours.

The heated exchange by a journalist from EyeWitness News and police was streamed live on Facebook and prompted outcry from some about perceived censorship of the media.

In the video, the journalist and a team were blocked by a police officer standing in front of a barricade near the six-legged roundabout, preventing the media team from driving through to get to their destination.

Angered by the officer not allowing the team to pass through the barricade after identifying themselves as journalists, one reporter called Commissioner of Police Anthony Ferguson for assistance.

However, they were still not allowed to pass through the barricade and returned to their office instead. “It has been brought to the attention of my office that a media house was denied access to the streets of New Providence to carry out their work,” Dr Minnis noted in a statement sent by the Office of the Prime Minister.

“This should not have happened. I want to make it abundantly clear for all that the COVID-19 emergency order allows for the free movement of the media. I’ve spoken to the commissioner of police this morning to ensure that these directives continue to be carried out.”

The previous night the police had adopted an entirely different attitude with reporters as the first night’s curfew fell.

“It’s really for one’s own health and we have to respect the health professionals and the order that is given by the prime minister, certainly the police and the defence force will carry it out to the T.”

There is good reason why a colony's Comrade Viceroy, shouldn't speak out on matters that they should've started in first. place. Next thing you know, 'Em be looking hijack even more prime time television. Nod once for yeah, Twice for no?