Commissioner: You Can Call 311 For Assurances During Curfew 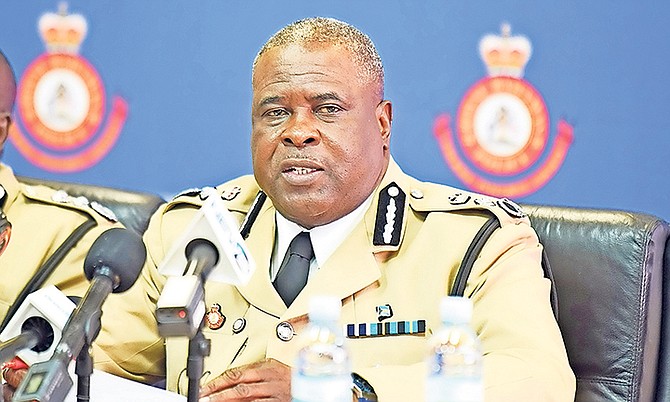 POLICE Commissioner Anthony Ferguson said residents can call 311 during the 24-hour curfew if they want assurances they will be given road access while travelling for essential services.

He told The Tribune Tuesday afternoon that calling 311 can help people concerned about getting through checkpoints.

However, he said calling 311 is not mandatory.

He said residents, regardless of socioeconomic backgrounds, will be treated equally during the curfew and said he would be “disappointed” if officers let biases influence their willingness to grant people’s requests.

“Nobody will be disadvantaged with any of their requests. We try to deal with everybody fairly, no this for that one and that for the next,” he said.

Mr Ferguson said the 311 number has 12 lines and can handle the anticipated surge in calls.

The Tribune asked him how residents could satisfy police they are going to access essential services.

“Call 311 for any query one has,” he said. “311 will give you an understanding of what you will be allowed to do and give you better access to what you are actually requesting. Officers on the checkpoints are really there for enforcement purposes. They will listen and have some discretion but the info should be channeled from the command centre to the various checkpoints. If there are really necessities for you to leave home, you should dial the 311 with the information about your location and where you are travelling. Once you get to the checkpoint, present a proper ID and the officers will say we got this information concerning you. There will be cases, emergencies, serious illnesses, where you cannot call 311 beforehand and the officers will deal with those situations accordingly.”

“By now," he said, "from the time the prime minister made the announcement, people should have food in their house. You shouldn’t wake up 10am and say I feel like eating Wendy’s. Police is very unlikely to give you that consent just to go to Wendy’s. Everybody should practice familial norms and be cooking.”

Supermarket requests “are different” he said. “We may find you have a legitimate reason to go to the supermarkets. People have special diets and you may run out of food so that is very necessary.”

“But the point is we want people to obey the orders. Stay inside on your premises and obey the safe distancing and avoid interacting with too many people, that is key. The more we understand that as a people and allow the health professionals to do their thing to monitor this, the better.”

Among the essential purposes for which people can move around during the curfew are banking, groceries, refueling, washing clothes, doctor visits and outdoor exercises.

Is this a joke? Most of us know full well how difficult it can be to get through by phone to anyone in government (including the police) using a government phone number.

Not only that, he just stereotyped everyone into one pot about cooking. Does he not realise that due to the Hurricane some people do not have anything to cook with?

Nothing to cook with, but can go buy fast food?

Because no fridge no stove. Heard about people in Abaco and Freeport who got hit with the storm?

So why is Fast food places open in the first place if no-one is allowed to go there, then they should all be closed. How D-average is it to expect hundreds of persons to call in to say beforehand " I will be going to the food store can you write my name down and be on the lookout for me, thanks". The commissioner of Police says " from the time the prime minister made the announcement, people should have food in their house", but i thought the prime minister himself was discouraging panic buying.

"thanks". The commissioner of Police says " from the time the prime minister made the announcement, people should have food in their house"

wow I can't believe he said that...that was not well thought of...putting it mildly. I'm literally flabbergasted. Are they talking to each other?

Are you just bored, or intentionally misunderstanding, Mandela?

Try calling any government number and by the time they even answer the phone you do not care anymore. Also since when fast food restaurants are an "essential service" ? Maybe liquor stores and number houses are also "essential services"

Does 311 ring in each respective island it is dialed from via cell phones, or are all calls answered in Nassau? A simple thing but if officers on the street are supposed to corroborate people out and about with the control room on their island.........

Went to the doctor tomorrow with an injury , so family member had to drive. did not know of the hotline, but could prove by sight I was injured.

I returned home to get money and go to a pharmacy to buy prescription.

Called 311 from my cell 3 times, the phone was busy. I went to the pharmacy and, had I been stopped, I would show purchase, the bandage and the three missed calls to this hotline.

I meant today. I went to doctor early today.