'Many will die if we don't take this seriously' 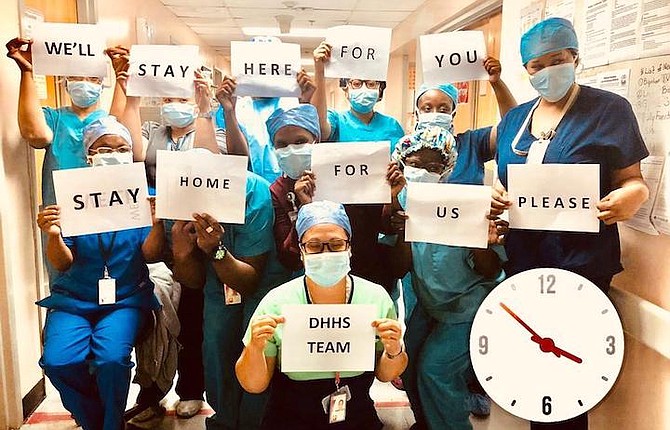 The team at Doctors Hospital get their message across.

HEALTH Minister Dr Duane Sands warned yesterday if the country does not take the COVID-19 threat seriously, “many of us will die,” adding health officials are not certain when the fast-spreading pandemic will end.

“Make no bones about it — this is war,” he said while appearing as a guest on the talk show ‘Darold Miller Live’.

“. . .So, if you allow this thing to get out of hand and say ‘oh don’t worry about it, everything cool, we gon’ be okay,’ you could provoke a crisis.

“…(But) we want to learn from the lesson of the people who’ve been through this before and pay attention to the lessons learned and avoid the mistakes that they’ve made and so we’ve been studying what they did.”

His comments come amid public outcry over the lack of concern displayed by some residents in the country concerning the novel disease.

In recent days, many residents have taken to social media, complaining about large gatherings at beaches and other social events, which contravenes the emergency order issued by Prime Minister Dr Hubert Minnis last Thursday.

On Sunday, police officials even issued a statement on the matter, reminding members of the public about the importance of social distancing.

Under the order, residents in the country are mandated to remain inside their homes until March 31 between 9pm and 5am. People are also barred from attending recreational or competitive sporting events and other social events. It is also mandated that people stay three to six feet from people in public places.

While acknowledging the social challenge this may cause for some Bahamians, Dr Sands maintained it’s important for residents to adhere to the government’s guidelines to ensure the health of the country.

He said: “… Bahamians are social beings, we love to interact but that interaction can be deadly because many of us even though we may not succumb to COVID-19, once we get infected, we gone take that home to mummy, to daddy, to grammy, to grandpa.

“They may have some high blood pressure and diabetes and so on and so forth, they’re not able to fight this thing off so when you look at the mortality rate for people who are 80-years-old, who get COVID infection, 20 percent of them die.”

He continued: “One in five. That’s in far contrast to children under nine where there have been, I believe, less than a handful around the world that have died. But, that doesn’t mean that young persons don’t get infected.”

“So, when you see all these people partying and going on the beach and carousing and having a good time, what they are basically doing is (potentially) infecting each other and then the problem is they take it home to the people who are vulnerable and that’s the problem we’re trying to avoid.”

Speaking during yesterday’s show, Dr Sands also responded to criticisms concerning the suspension of church services in the country.

“It is because church can result in this disease being spread and many of those churchgoers’ victims, many of them could possibly die. That’s how serious this is and we want people to understand that this is not about upsetting, aggravating, annoying or pissing people off.

“This is about saving Bahamians lives. That’s how serious this is.”

However, the health minister was clear that if locals do not comply with the rules, resulting in a possible outbreak in the country, the situation could prove catastrophic for an “already challenged healthcare system”.

“Let’s be very clear that The Bahamas has just come through Dorian, we have just taken a massive economic blow, a huge amount of healthcare infrastructure which was challenged to begin with was destroyed or damaged in Dorian,” he added.

“The Rand Memorial Hospital (in Grand Bahama) is just now being reconstructed. Imagine if we had a rush (or) a huge volume of cases of COVID-19 to overwhelm that already challenged healthcare system?

To date, there are four confirmed COVID-19 cases in the country, but health officials have previously said that the number is expected to increase.

However, Dr Sands said yesterday: “If we do the right thing and if we’re aggressive, if we take the strategies that are proven to be effective in Taiwan and in Wuhan and in Singapore and other countries that took this thing very seriously, then the Bahamas will not be one of the casualties of COVID-19.”

RE PHOTO; I pray all of you remain healthy through this but if you do fall ill you have the strength to pull through. Put that on some billboards outside the foodstores.

how interesting they had the time to post this picture. But will walking or running on the beach cause any more risk than grocery shopping or going to the bank?

Just asking. I wish all the very best. I am sure they all mean well.

if people don't eat they will die. not everyone has funds to stock up for 3 months of hibernation

… an unintended benefit might be a reduction in the obesity epidemic this country is experiencing. Most have enough body fat to survive for at least three months!

Grocery shopping, people pick up items and put them back on the shelf which is a real potential for spreading the virus, or you have multiple people at the same place along the aisles. On the beach you can keep apart from others and you don't touch anything that might pass the virus along. Common sense really, but something that is sadly lacking here.

Dr. Sands you and your FNM Government seems not to care about the Rand Memorial Hospital. . Something like the response to Ragged Island.

Jeez, don't you ever give your political rants, a rest ? Like countless others have said before me, now is not the time for YOUR political vitriol

@birdie: Your polar opposites are @Bobsyeruncle and @Baha10.

Great Message, but not the best example of “Social Distancing” ... please practice what you preach if you want General Public to take you seriously. Nonetheless, Thank You for your Service!