Alicia Wallace: 'We're Not Being Punished Just Protected - But We Must Not Forget Those Who Fall Through The Gaps' 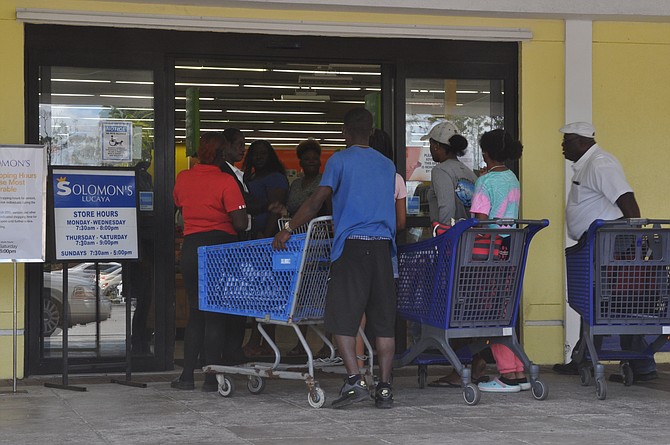 We are here. What is being called a “24-hour curfew” is now in place and will remain until March 31. Except for essential workers, we are to work remotely or businesses are to pause their operations. The only businesses that should be open are grocery stores, pharmacies, medical supplies and services, hotels, banks, gas stations, laundromats and food takeaways.

No non-essential worker should be on the road or outside of their residential property unless with the express purpose of getting supplies from a business allowed to be open or having up 90 minutes of outdoor exercise. We are to maintain a six-foot distance, at all times, from people who do not live in the same household. Businesses are expected to manage this and clearly mark spaces for customers to stand in lines both to enter their establishments and to cash out.

Following the first emergency order, some Bahamians decided to be defiant. There were beach parties and brunches. People have behaved in ignorant ways, and this resulted in restrictions being more clearly articulated. There are to be no parties, sporting events, or other kinds of functions that cause people from different households to mix. This is expressly forbidden. Weddings and funerals are limited to 10 guests. These restrictions were part of the first order, though not as explicitly stated. The restrictions themselves are not a result of people defying the first order. They are in the first order, but now explained in more detail.

Ignorance exists, but it is not the only reason

Additional restrictions were announced in the prime minister’s address on Monday night. Airports are now closed to visitors, domestic travel is not permitted and beaches are now closed. The 9pm to 5am curfew has been expanded to all day, every day.

People have been discussing these changes as though they are a punishment. They think the shutdown has escalated due to the reckless behaviour of the people who decided to gather in large numbers on Sunday. This may have expedited it, but we were going to have to move in this direction.

Paying attention to the news and developments in any other country would show those people that this is the way it works. First, there are small changes. Social distancing is encouraged. Then, there are limited hours to be in public and limited places to visit. The window to be off residential property narrows. Less people are allowed to cross borders. There are incremental changes.

Whether or not people were foolish enough to have beach parties and brunches, the parameters were going to eventually change. That said, the closure of public beaches in particular probably came as a direct result of the Sunday shenanigans. Other than that, the country is following a course of action that is very similar to that of other countries.

This is happening because we need to protect ourselves and we obviously would not do that effectively without emergency orders that stipulate what is and is not permissible based on the information provided by medical professionals.

It’s not about you

Maybe you are young and healthy. You feel invincible. You are not going to get sick from this virus. Even if you do, you’re sure you’ll be fine. That’s great. For you. There are, however, other people around you. You sit next to them at work. You hang out in the same grandmother’s living room. You touch the same surfaces they touch. You use the same hymn books. You taste soup from the same spoon. You use the same door handles to get in and out.

Droplets can be anywhere. Droplets are everywhere. You can take them with you without knowing and without feeling the effects. Do you really want to be the reason the elderly woman you help to the car after church every Sunday gets COVID-19 and dies? Do you want to give a few droplets to the person ahead of you in line who does not look like she has lupus, but she does? You be healthy and unafraid, but this is not about you. This is about reducing and slowing the spread. This is about making sure our health system is able to support people when – not if – they get the virus.

Do you know what else you can’t do? You can’t cause the grave illness or death of another person by unknowingly giving them COVID-19 if you comply with the emergency order. That matters more than the relatively minor disruptions to your routine.

The emergency order depends heavily on police for enforcement. We know that police can be overzealous in their application of the law. On the weekend, we saw just how selective not only police officers, but the Commissioner of Police can be. Media personnel were on the street during curfew hours, live-streaming to show us the quiet, desolate streets of Nassau and the presence of police.

The first night was fine, all of them able to move freely. On the second night, a media team led by a well-known personality was denied road access. The way he handled it was certainly not ideal, but escalation to the Commissioner of Police was not helpful. The emergency order clearly exempted media, but this person was told that Ferguson was calling the shots as he saw fit.

The next day, the Prime Minister announced that no media should be impeded from their duties and that he had spoken with Ferguson about it. Still, the same media team was not only turned around when attempting to pass police, but escorted back to the studio. This has led people to ask an important question. Who is really in charge? There is another equally important question. How do we ensure the police do not abuse their power, especially as ordinary citizens do not have the privilege of the press?

There are numerous other issues with the current situation. The emergency order is understandable, but nothing has been put in place to protect or serve the vulnerable. Information is not readily available in Creole. There are no systems in place to support women experiencing domestic violence, now spending even more time in isolation with abusers.

There is no support for people who are in the informal or gig economy and are being impacted by the measures now in place. Nothing has been said about the communities we know do not have water piped into homes. Until recently, no mental health services or resources have been promoted at a time when people are experiencing significant change and high levels of stress. Bahamas Psychological Association has now set up a hotline - 812-0576 or 815-5850 - in collaboration with Ministry of Health, Pan American Health Organization,and Public Health Authority.

There are large gaps and we are not even being assured that steps are being taken to fill them. The Ministry of Health has the attention of all decision-makers, but other Ministries and Departments should be carrying out assessments and making recommendations. The expertise of civil society organisations should be put to much better use.

Our response to a crisis should not cause other crises and, sadly, without recognising and filling the gaps, we are headed down that path. Many countries are having a similar experience, so Feminist Alliance for Rights (FAR) has developed guidelines for implementing feminist policy that will reduce the gaps created by their crisis response. It has been endorsed by over 500 individuals and organisations and sent to directly to states. It can be viewed at tiny.cc/feministstatement. Read it, identify the recommendations applicable to The Bahamas, and join advocates in applying pressure.

Vulnerable people are depending on us to amplify their voices and ensure they are not forgotten and are not treated like collateral damage. There is no more waiting for things to get real. We are there.

It's the government 's mandate to keep us safe and they are really trying.....against people who don't fully get it......to do just that, keep us safe. They are busy. Whether a woman stays with a man who is going to now beat her daily .....what can the government do about that? Those gaps you mentioned......people are going to have to take some responsibility for themselves and try to fill at least some of those gaps themselves.....sounds heartless , but the government can't be responsible for every problem we have.

Some voters might argue that God is punishing them for having voted for the wrong candidate in May 2017. First Hurricane Dorian and then the Red China Virus. What's next, dare I ask? Some are saying Minnis is jinxed! Lord help us.

Really? You are more ignorant than I though. What a stupid comment!

This was almost a well written piece, until it got to the final paragraphs. This is where the writer took predictable form of devaluing, actually removing, personal responsibility for a segment of society. Whether an individual speaks only creole in an English speaking country, decides to stick it out with an abuser in lieu of homelessness or subsists in an "informal" (i.e illegal, unregistered) economy...its their decision. The provisions made for the masses already includes them. The government cannot however, enforce common sense or good choices or appear to legitimize illegal transactions by making special provisions for these groups. When these adults want or need assistance, I'm sure they will seek it out.

Well said. Ms Wallace points out several truths. The 24hr curfew had nothing to do with people on beaches. It was always going to happen. Why govt officials keep putting forward the view that they had to do this because of people on the beach I don't know. This was already in the works.

Secondly she makes a point about supporting the vulnerable. When Dorian happened, there was laser focus on the persons in Grand Bahana and Abaco and necessarily so those persons lost everything suddenly. But if you weren't from Grand Bahama or Abaco, what you need help for?

I and others poointed out that there were 40,000 vulnerable before Dorian who still needed help. Many of the enlightened and socially mobile in the community said I'm making it on my own 2 feet, why can't they? These enlightened were comfortable, and blind to the suffering. Now some of those persons will see their earnings cut drastically, they may still be ok, just not as comfortable. But if this thing drags on, media, banks, govt, telecommunications, food establishments, insurance companies, will all either reduce staff or reduce pay, and more people will understand "uncomfortable".

Nevertheless there are still others unaffected, their companies are still open and their line is Im making it, you should have been better prepared. I hope and pray that there is not another shock that makes all of us uncomfortable just so we can understand the plight of our brother.

It is going to get worse before it gets better.