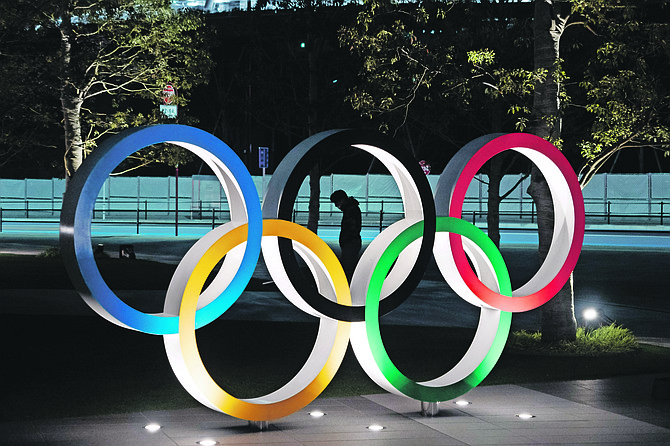 A man is seen through the Olympic rings in front of the New National Stadium in Tokyo yesterday.

The 2020 Olympic and Paralympic Games, the world’s biggest sporting spectacle, has finally been postponed until 2021 because of the spread of the coronavirus pandemic around the world and the significant impact it was having on global athletes’ preparation for the multi-sporting event.

In a joint statement yesterday, the International Olympic Committee and the Tokyo 2020 Organising Committee finally announced the postponement of the Olympics, which was scheduled for July 24 to August 9 in Tokyo.

IOC President Thomas Bach and Japan’s Prime Minister Shinzo Abe, accompanied by various dignitaries of the host country, agreed that the Olympic Games in Tokyo could stand as a beacon of hope to the world during these troubled times and that the Olympic flames could become the light at the end of the tunnel in which the world finds itself at present.

The Olympics would be the latest – and, by far, most significant – sporting event to be impacted by the coronavirus, which was first identified in Wuhan, China, in December.

Also known as COVID-19, the virus rapidly spread throughout China and across the world in subsequent months, infecting hundreds of thousands of people and causing substantial disruptions to daily life in numerous countries.

This would the first time the Olympics have been suspended, though they have been cancelled previously during periods of war. The 1916 Summer Games were cancelled because of World War I, as were the Summer and Winter Games in 1940 and 1944, due to World War II.

Boycotts also caused serious complications for the Games in 1976, 1980 and 1984. But in each case, the event itself went on as scheduled.

Bahamas Olympic Committee President Rommel ‘Fish’ Knowles said it is an imminent decision that he hopes the athletes will understand was made with their well-being paramount.

Knowles said although there were just six athletes who have qualified so far, the BOC and its first female chef de mission Cora Hepburn was working to prepare a team that would represent the Bahamas as best as they could under the circumstances they were faced with if the games had proceeded as planned.

But he said they were also prepared for the worst case scenario, having the games either postponed or cancelled.

“If I could describe how we feel right now, the word would be relief,” Knowles said. “Athletes from around the world now have a clear and better understanding about these games. With social distancing, it became very difficult for them to train.

“As you are aware, a number of qualifying meets had to be postponed and training centres closed down, so it became very difficult for the athlete to train in a proper and conducive environment to bring out their peak performance.

“So the announcement today, I can assure you, is a relief. Now some more begin. We must now speak with the IOC about the Olympic scholarship to see if they will be extended. We will speak with the Government of the Bahamas about the athletes’ subvention, the federations’ grants, how best they can be administered in the best interest of keeping our athletes on the cutting edge and ready for the Olympic Games 2021.”

In the past three months since Covid-19 broke onto the international scene, Knowles said Bahamian athletes were in limbo like athletes around the world about whether or not the Olympics would be postponed or go on as planned.

“At no time, the Bahamas Olympic Committee doubted our president Thomas Bach, on the course of action that would be in the best interest of the Olympic Movement,” Knowles stated.

“We were satisfied that at the appropriate time, he along with the executive board, along with the president and the good people of Tokyo, would have made the right decision for these Games.

“I wish to thank personally, the president of Tokyo, the president of the National Olympic committee of Japan and others for the fine work they have been doing in hosting what I believe will be perhaps one of the best Olympic Games in our history. Technology wise, they have surpassed every expectation.”

At present, Knowles said the BOC could not put a dollar figure on the exact budget for the games as they were waiting on the IOC’s decision. He noted that they held back on purchasing tickets and hotel rooms in Tokyo, so they would not have expended any significant figure on the games as yet.

So far, only athletes from track and field have qualified for the Olympics. They include first time sprinter Samson Colebrooke and returning for their second or third are hurdler Pedrya Seymour, quarter-milers Shaunae Miller-Uibo and Steven Gardiner, high jumper Jamal Wilson and sprinter Tynia Gaither.

The BOC was also hoping that other athletes, relay teams, a few swimmers and at least one boxer, Carl Hield, would have qualified for the games.

However, in recent weeks, the majority of qualifying events in all sporting disciplines were called off due to the spread of the Covid-19 virus. To all of the Bahamian athletes aspiring to make Team Bahamas for Tokyo, Knowles had this message for them.

“You have a time table, a schedule and the certainty of the event, to use the time wisely to prepare for the Olympic Games of 2021,” he stressed. “We, the Bahamas Olympic Committee, stand by your side and ready to assist you in any endeavour that we can. Be also banded this virus is perhaps going to cause a slowdown in the economy, a recession perhaps and so we must use every prudence in the resources that we have at our disposal. Be guided accordingly.”

To their member associations and federations, Knowles also thanked them for their diligence until the decision was reached by their stakeholders in the IOC and Tokyo 2020, it was a most difficult time to endure. He said they will now work together in getting ready for Tokyo 2020 in 2021.