Stateside: Trump Keeps Putting His Foot In His Mouth Without Sanitising It 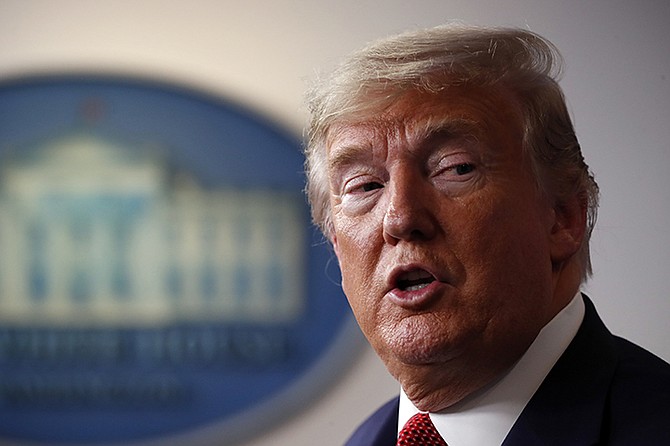 Trump’s handling of the pandemic has hardly been inspiring.

On Tuesday the coronavirus claimed one of its biggest victims yet. The 2020 Olympic Games have been postponed. The International Olympic Committee and the Tokyo organising committee officially announced the quadrennial global games had been put off until sometime next year.

Perhaps the handwriting was on the wall on Sunday when the Canadian Olympic Committee said it wouldn’t participate if the games began as scheduled late in July.

For The Bahamas, which must do as well as any nation in the world at the Olympic games when measuring its population against its haul of medals, this postponement is just more dispiriting news in a week full of disappointment.

Over the weekend, Sir Sol Kerzner died. The white South African impresario, whose transition here was so memorably smoothed by none other than Nelson Mandela over 25 years ago, left an enduring mark on Paradise Island by turning the stagnant Resorts International property into a world-renowned destination.

Kerzner was initially controversial. He was strongly linked in popular minds to South African white separatist policies that had long prevailed in his homeland despite global sanctions. When Mandela, fresh from sharing the Nobel Peace Prize in 1993 for helping to broker majority rule in South Africa, arrived in Nassau to lend substance to Kerzner’s application for ownership of Resorts International, the effect was electric. Approval of Kerzner’s application to purchase and redevelop Resorts International soon followed.

As has been noted, it is ironic that Kerzner should pass just at the moment the world’s health crisis threatens tourism everywhere, certainly including at Atlantis.

In New York and Washington, the effects of the increasingly one-sided contest between US President Donald Trump and the coronavirus were perhaps more clearly felt than ever.

The American stock market Monday officially completed the astonishingly quick process of losing every single penny in value it had gained since Trump’s inauguration. And then some. A Dow Jones Industrial Average that had soared to very nearly 30,000 slumped below the 20,000 mark it maintained in January 2017. A stimulus-fuelled recovery may be in view. Let’s hope so, and we will see how far it goes when it really begins.

With its remarkable losses, the market removed, for now, one of the principal props supporting Trump’s stubborn push for re-election. There are other reasons to support the President’s desire for four more years in office, but none has been cited so frequently by Trump himself.

This President’s handling of the pandemic has hardly been inspiring. On almost every day over the past several weeks, he has been televised putting his foot in his mouth without even sanitising it first. Even conservative commentators have been moved by what they see with their own eyes to dispute Trump statements such as this tweet, aimed at encouraging a return to work and reopening of the many businesses who have slowed or shuttered operations:

“Our people want to return to work. They will practice social distancing and all else, and seniors will be watched over protectively and lovingly. THE CURE CANNOT BE WORSE BY FAR THAN THE PROBLEM.” The capital letters emphasis is Trump’s.

He clearly wants this crisis to go away and to stop its pesky interference in his re-election campaign. Trump’s denials of the seriousness of the pandemic have led numerous aides, including Dr. Anthony Fauci, head of the National Institute of Allergies and Infectious Diseases, to directly contradict some of Trump’s more nonsensical pronouncements.

Fauci, who until recently appeared as part of the human background for Trump’s daily press conferences, has become something of an American national hero for the simple reason that he seems to be telling the truth to an anxious population. The man has proven to be trustworthy. The contrast with his boss could not be more pronounced.

Even Liz Cheney, daughter of and heir to the still potent residual influence of former Vice President Dick Cheney, was moved to offer the following:

“There will be no normally functioning (American) economy if our hospitals are overwhelmed and thousands of Americans of all ages, including doctors and nurses, are dying because we have failed to do what is necessary to stop this virus,” Liz Cheney tweeted.

Cheney, elected only three years ago to the single at-large congressional seat from her home state of Wyoming, has risen in that phenomenally short time to the No. 3 leadership position in the Republican Party in the House of Representatives. A Senate seat was hers for the taking this November with the retirement of the Republican incumbents, but she elected to stay where she is, in what is surely one of the safest House seats in the country.

She may want to become the second woman, and first Republican, to serve as Speaker of the House. Many observers believe her longer range goal is another house, the white one at 1600 Pennsylvania Avenue. But for now, she is a GOP rising star and her words count.

But Cheney’s words still don’t count nearly as much as the President’s words count. When he lies, it hurts.

16,000 reasons not to put your faith in the president

Speaking of Trump’s lies, the Washington Post and other media outlets are still publicly keeping track of them. The total has now reportedly passed 16,000 falsehoods in not much more than three years in office. You’d think that would be hard to accomplish, but when your mouth is open in public as often as is Trump’s, it’s apparently doable.

Even as his own medical specialists contradicted him and the Senate struggled for too long to agree on the parameters of a massive stimulus bailout, Trump kept talking. And lying.

Here’s a sample of his misstatements and untruths on the coronavirus, courtesy of the Post:

January 21: “We have it (coronavirus) totally under control. It’s one person in from China.”

February 6: “We pretty much shut it down coming in from China.”

February 10: “Looks like by April when it gets a little warmer, it miraculously goes away.”

During this three-week period, the US went from one confirmed coronavirus case in Washington state to several more. And over 1,000 people worldwide had already died from the virus.

February 25: “We’re very close to a vaccine.” - No vaccine for at least a year from now, and probably longer, say most health experts.

February 26: “We have 15 cases in the US, and within a couple of days, that will go down to nearly zero. That’s a pretty good job we’ve done.”

Within five days, there were over 100 US cases. By mid-March, 28 people had died. The federal government did not do a pretty good job at all.

March 6: “Anybody that wants a test can get a test.”

Not true, then or now. A doctor or public health official must prescribe the test.

March 11: “Health industry leaders have agreed to waive all co-payments for coronavirus treatments.”

Incorrect. Only test cost payments would be waived. There were numerous other examples. But you get the point.

Most Americans apparently believe Trump lied to calm the stock markets; to keep his re-election prospects on track; to protect his “great friend,” Chinese President Xi from embarrassment; from inattention or ignorance or simple puerile petulance. Or all of the above.

But does any of those reasons strengthen your faith in Trump’s leadership?

Two left in the race

Meanwhile, on the other side of the political aisle, Hawaii Democratic congresswoman Tulsi Gabbard has finally accepted the inevitable and abandoned her presidential candidacy. That leaves just front-runner Joe Biden and his stubborn challenger, Bernie Sanders.

Numerous Democratic primary elections remain on the calendar, but many have been postponed until June 2, and few promise favourable results for Sanders. He nonetheless remains in the race, protected by the national obsession with the coronavirus from reporters’ nagging questions about why he is doing so and not putting his mind to efforts to unify his party to confront Trump in November.

Biden shook up his campaign staff not long ago, bringing on board as his new campaign manager 43-year-old Jen O’Malley Dillon, who was deputy campaign manager for Barack Obama in his winning effort against Mitt Romney in 2012. The appointment was widely praised.

Biden’s campaign was initially woefully underfunded, but that is changing. Former New York mayor Mike Bloomberg has reportedly pledged $2 billion to help defeat Trump. The Service Employees Union will spend more than $150 million in eight key battleground states to support the Democratic nominee. Other trade unions, facing a stout foe to future labour organising in Trump, will also sign on with money and campaign workers. Big Democratic donors are supposedly finally lining up behind Biden.

This doesn’t nearly match the funds raised by Trump’s campaign. But for money, if not for delegates, it’s still early.

Oh it must be true if it's on the internet! ha ha ha !

You been in a cave the last 8 weeks? Or are you just a dumb trumpie?