We All Need To Do More: Curfew Extended Until At Least April 8, Two Infected Cases Hospitalised, Designated Shopper For Each House 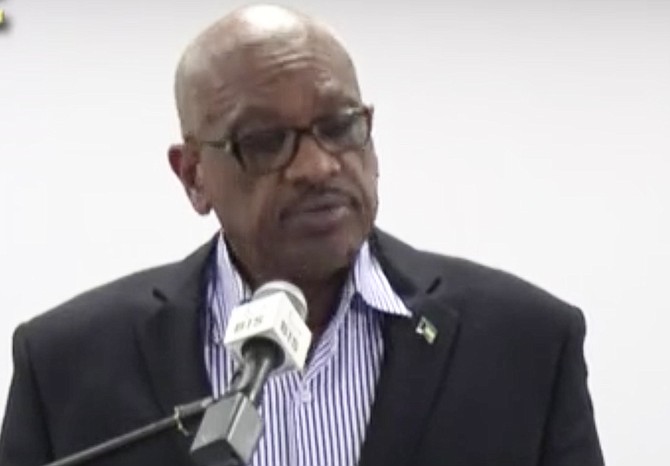 THE House of Assembly will today debate a resolution to extend the country’s state of emergency and emergency orders to April 8, Prime Minister Dr Hubert Minnis said last night, as he revealed the number of confirmed COVID-19 cases had surged to 14. Two of the newest cases are in Grand Bahama, while one is in New Providence. Dr Minnis also bemoaned the number of people who have been leaving their homes in spite of emergency orders restricting movement and a national 24-hour curfew.

In order to limit the number of people traversing the streets, Dr Minnis pledged yesterday that police officers will step up the enforcement of his curfew and that a food shopping schedule will be issued to limit how many people can attend grocery stores each day.

Noting the country has been doubling its cases over the last four days, Dr Minnis said: “We are at the beginning of an expected surge.”

He added: “This means we must increase our efforts to restrict the spread of this virus and to save lives.”

He suggested he is dissatisfied with the level of compliance with his emergency orders. While he stressed that he wanted the restrictions to end as soon as possible, he said they must be adhered to in order to stop the spread of the virus.

“Some people have very hard heads,” he said. “Well, this virus is harder and badder than even the hardest of heads in this country…There are still too many people on the road.

“Individuals aged 75 and older are asked not to leave their homes. Those between the ages of 65 and 74 should work from home,” he said.

“Each household should have one designated shopper. Grocery stores with the capability will be encouraged to activate online shopping platforms to reduce the number of people having to come into their stores for food and supplies and the length of time customers have to spend in the store.

“The government will introduce a food shopping schedule. Shopping days and times will be designated based on the first letter of a person’s name. More details will be released this week.

Pharmacies and banks will be allowed to operate from 9am to 1pm, he said. Landscaping/property maintenance businesses and janitorial services will be allowed to operate on Saturday and Sunday only, he added. Pool maintenance businesses can only operate on Friday and Saturday, while all roadside vendors, except for newspaper sellers who shall remain at one location, will be prohibited from operating.

“This week I will make an announcement for those who live in rental properties of a certain value who have lost jobs or income because of COVID-19,” he said. “Saving lives and protecting the health and safety of our citizens and residents is our priority. We must also meet the minimal needs of our economy.”

He said the approvals process for investment projects will be accelerated to ensure people get back to work as quickly as possible.

Dr Minnis also announced that public parks will be closed starting at 9am tomorrow.

Chief Medical Officer Dr Pearl McMillan, asked whether clusters of COVID-19 cases are forming anywhere in the country, said officials are beginning to see such linkages.

“We are still going through the data to be able to analyse it a little more, we started the (Geographic Information System) mapping…and we anticipate that in short order we will be able to say to you exactly what the decision is,” she said. “What we do know, from what we’ve plotted already, is there is community spread so it’s most important for us to actually follow what we have been asking persons to do to diminish the likelihood of persons being infected because the virus is out there and it’s widespread in our community.”

She said officials have tested more than 200 people for the virus to date, with 1,700 or so PCR tests in the country.

She said the surveillance team of the Ministry of Health is monitoring the 100 or so people in self-isolation through calls.

“I think it’s almost impossible to actually have patrols and we ask them to be responsible and quarantine but we do from the surveillance unit, monitor whether they are developing symptoms,” she said.

Last night, the prime minister also hit out at “fake news” which has been circulating in this crisis. He referred to a widely shared vote note from a man who falsely claimed the government would announce a “country-wide 30-day shutdown” today. Dr Minnis said the commissioner of police has been asked to investigate the misinformation.

To prevent the spread of COVID-19, health officials are advising people to stay at home, frequently wash your hands with soap and water, refrain from touching your face and to call a doctor if you feel sick. For more information, contact the Ministry of Health’s COVID hotline at 376-9350 or 376-9387.

Apparently the Corona COVID-19 has already left the station and it will take a number of passengers with it, regardless of what measures are put place. The USA expects some 200,000 people will die in that country ( current toll is 2,600), and April is expected to be that country’s most deadly month, thus far, at least. And they plan to restrict movement even more, restricting and even prohibiting travel bets some states and making air travel undesirable it not impossible. So Bahamians must prepare for the long haul.And government must be prepared to face a situation where maybe less than 20 percent of the population is working. The food store shelves may be stocked but most people’s pockets are running empty. What happens when there’s no money to buy food and medicine?

The problem is that many Bahamians now go to the food store because they want an excuse to go out. Not only this creates unnecessary long lines but creates more health risks that will cause the curfew to extend even more. It looks that the new daily routine is to go out with your kids buy them junk food and then hang out with them in the food store for as long as you can. We have so many fools in this country it is not funny anymore

We simply need to extend shopping hours starting from 6 am until.... Once people know there is no shortage of food the tendency to horde will decrease. But I do agree that we don't need entire families crowding up aisles in grocery stores to buy three items!

Alphabetical shopping. What bloody next? The PM must be getting bored with his own restrictions. He apparently makes new ones at will 🤔

Red Shirts Party Money Backers: Order your Dear Comrade Leader an enclosed Gold State carriage festooned with baseball hoops. The carriage can be fast-tracked ordered - no middleman's - directly from England's carriage workshop of Samuel Butler - so then colony's prime minister can put his eight most loyal substantive crown ministers to more substantive butt kissing work as the PM' s eight-footman's-drawn carriage. Nod once for yeah, Twice for no?

But he does say that persons doing construction and the lumber companies that supply the material for Dorian Construction can remain open.

It is a mixed message. Are those persons not capable of spreading the virus?