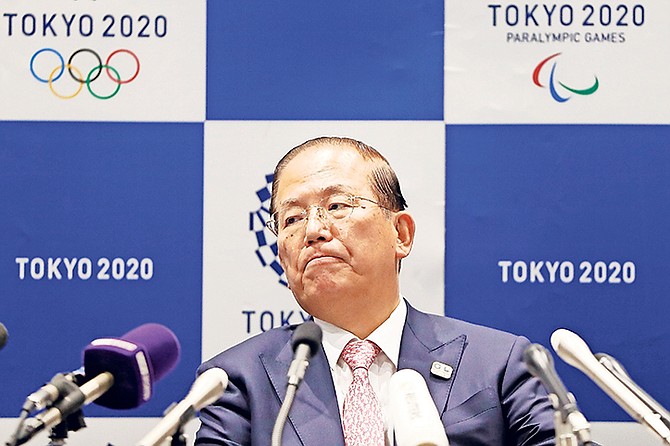 Tokyo 2020 Organising Committee CEO Toshiro Muto attends a news conference yesterday after a Tokyo 2020 Executive Board Meeting in Tokyo. Tokyo Olympic President Yoshiro Mori said yesterday he expects to talk with IOC President Thomas Bach this week about potential dates and other details for the rescheduled games next year. Both Mori and Muto said the the cost of rescheduling will be “massive” - local reports suggest several billion dollars - with most of the expenses borne by Japanese taxpayers. (Issei Kato/Pool Photo via AP)

We now have a new proposed date for the games of the XXXII Olympiad.

Stakeholders listed three main reasons behind last week’s postponement and deciding on the new date. “To protect the health of the athletes and everyone involved, and to support the containment of the COVID-19 virus; To safeguard the interests of the athletes and of Olympic sport; The global international sports calendar.”

“With this announcement, I am confident that, working together with the Tokyo 2020 Organising Committee, the Tokyo Metropolitan Government, the Japanese Government and all our stakeholders, we can master this unprecedented challenge,” IOC President Thomas Bach said.

“Humankind currently finds itself in a dark tunnel. These Olympic Games Tokyo 2020 can be a light at the end of this tunnel.”

This marks the first time the Olympics have been postponed because of a global pandemic. Previous editions in 1916, 1940 and 1944 were cancelled due to World Wars I and II.

World Athletics was the first international sporting body to call for the postponement of the 2020 Tokyo Games and also led the charge, giving voice to support of the new dates.

“We support the new 2021 dates for the Tokyo 2020 Olympic Games announced today by the Japanese organisers and the IOC. This gives our athletes the time they need to get back into training and competition,” the organisation said in a press release. “Everyone needs to be flexible and compromise and to that end we are now working with the organisers of the World Athletics Championships in Oregon on new dates in 2022 for our World Athletics Championships. We are also in discussions with the Commonwealth Games Federation and the European Championships. We would like to thank our Oregon 21 Organising Committee, their stakeholders and our partners for their collaboration and willingness to explore all options.”

The new dates are exactly one year after those originally planned for 2020 (Olympic Games - July 24 to August 9, 2020 and Paralympic Games: August 25 to September 6, 2020). The IOC said the postponement and new date was also aimed at limiting any disruption to the remainder of the international sports calendar.

Said Tokyo Olympic President Yoshiro Mori: “A certain amount of time is required for the selection and qualification of athletes and for their training and preparation, and the consensus was that staging the rescheduled Games during the summer vacation in Japan would be preferable. In terms of transport, arranging volunteers and the provision of tickets for those in Japan and overseas, as well as allowing for the COVID-19 situation, we think that it would be better to reschedule the Games to one year later than planned, in the summer of 2021.

“Notwithstanding the postponement of the Olympic and Paralympic Games for the first time in history, and various other issues that have already been highlighted, the event schedule is the cornerstone of future preparations, and I am convinced that taking this decision promptly will help speed up future preparations,” he said.

Gardiner said: “As athletes, we just have to continue working and staying healthy for next year.”

Wilson added: “Whenever anything opens up, it can be a high school, college meet, I’m just excited to get back out and start competing again because I have been competing well this year.”

It has previously been confirmed that all athletes already qualified and quota places already assigned for the Olympic Games Tokyo 2020 will remain unchanged.

This is a result of the fact that these Olympic Games Tokyo, in agreement with Japan, will remain the Games of the XXXII Olympiad.

No one will attend in 2021 because by then Red China will have released Red China Virus Version 2.0