Face To Face: The Passion’S Still Ablaze In ‘Fireman’ Brown 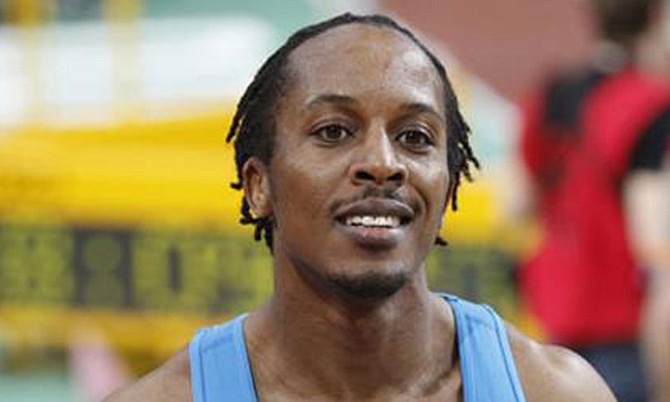 He is one of the most beloved track stars in the country. He is a husband, father and a coach, having mentored hundreds of kids in The Bahamas and in America. He has travelled the world and has stood on an Olympic pedestal with a gold medal. Yet, Chris “Fireman” Brown is one of the humblest people you could meet. This island boy believes in God, family and country and during the COVID-19 lockdown, he has grown even more committed and focused to the things he loves.

Had it not been for the onslaught of a global pandemic, Chris would be headed to Tokyo for the summer Olympics in two months’ time. He was ready to bring the fire to the track and run for his country once again before hanging up his cleats, at least from the Olympic field. But he will have to wait until next year. The idea of having thousands of the world’s greatest athletes come together - and hundreds of thousands of spectators in the stands - is a nightmare for pandemic experts. An event like the Olympics could cause a major resurgence of COVID-19 all around the world. 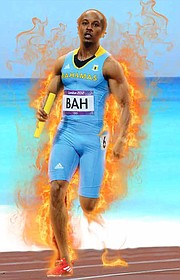 Chris adores his Bahamian fans. Their cheers give him life. Here, he is pictured with a flaming background to reflect his nickname. Graphic: Sidda Communications

With this in mind, the event has been delayed and athletes around the globe will have more time to prepare. For some, they are in perfect form and ready to compete and the delay can cause a bit of anxiety. Others are recouping from injuries, or felt they needed more time to train so they are breathing a sigh of relief.

Chris looks at life a little differently. He leans on his spirituality as a guide and compass in life. He makes his major moves, he says, when he gets a word from God.

“I wanted to run in the Olympics once more; now it’s been moved to 2021, I still want to, and that may be the final one unless the Lord says he wants me to focus on something different,” he said.

“I have accomplished so much and for my next move, I am waiting on his guidance. Although mankind may try to stop things in different ways, I will stay focused. As they say, who God bless, no man curse.”

And he certainly has been blessed. He won gold at the 2012 Olympic Games in London. He has won four World Championship medals in the 400 metre relay. That’s in addition to winning numerous medals in individual contests. The Olympic achievement was a big one for The Bahamas. He ran the 4 × 400 m relay with Demetrius Pinder, Michael Mathieu and Ramon Miller. They beat the defending champions the United States, marking the first Olympic men’s gold medal in any athletics event for The Bahamas and the first American loss in that race at the Olympics since 1972. The four were dubbed “The Golden Knights”.

Chris also won a silver medal at the 2008 Olympics in Beijing. His two Olympic bronze medals were won in Sydney in 2000 and in Rio de Janiero in 2016. He has had the privilege of serving as the flag bearer for The Bahamas at the Olympics, a role he performed with pride.

“The support of my country has been the driving force behind a lot of my success,” said Chris.

“Knowing that so many people are pulling for me…  it means the world. I come home and I feel the love. They named a street after me. I have been to dinners with the dignitaries that run the country. People have celebrated me and have shown appreciation.

“What can I say but, thank you! Whatever my calling may be, the next step, my next role, I just look to continue to carry my country and lift it up. I just want to be a beacon, soaring through the sky, carrying the banner as high as I can get it. I want to see the legacy continue to be carried by the young people of The Bahamas.”

Chris’ love of country compelled him to create the Chris Brown Bahamas Invitational – an elite track and field meet that hosted over a hundred athletes, coaches and managers for a world-class professional event. It was held in 2013 and again in 2016 and for Chris, it was a way to show off his beautiful country to the world, while giving his fellow stellar athletes an opportunity to see how venues like The Bahamas are just as viable to host competitions. In fact, The Bahamas became host to the 2014 and 2015 IAAF World Relays, where Chris and his teammates won silver in the men’s 4x400 metres.

When he’s not preparing for international track meets, Chris is busy working as the assistant track coach at Clayton State University, a Division 2 institution in Georgia, USA. With school closed because of COVID-19, Chris is busy working from home participating in university meetings, recruiting new athletes and working one-on-one with current student athletes to ensure they are sticking to their regimen despite the change in school routine.

He balances his daily work with his family responsibilities as a husband and father-of-three. He and his wife Faith have been doing what many families are faced with during this time – balancing working from home with having to homeschool their children – Emerald, ten, Zora, eight and Shiloh, four.

Chris joked: “It’s like having a tornado, hurricane and tsunami in your house at the same time!” But I had to ask him – what else could he expect to be the product of a man who has brought so much heat to the track, while putting out his competitor’s fires that he earned the nickname “Fireman”.

“We make it work by setting up a work station for everyone and when they are there, they know they have to put in some work in some form or fashion. But we let them go outside and play; we let them take a break whenever they get antsy. We know that it’s a whole new adjustment and we can’t operate like it’s the school system.”

Chris and Faith named their two daughters and their son with Biblical inspiration. They want to give their children a strong spiritual foundation, as well as a strong cultural one. The family regularly visits The Bahamas which the children love. They have even gone to Chris’ hometown, Wemyss Bight, Eleuthera. There, he was raised by his parents Harcourt and Nola Brown, who raised their seven children in the quaint but beautiful south Eleuthera settlement. Chris grew up being close with his siblings and on the island, he says, everyone knew each other. His children also love watching the Junkanoo parade in Nassau and love Bahamian food.

They are also privileged to have a strong cultural background on their mother’s side. Faith’s mother is from Nigeria and her father, who passed away just a few weeks ago, is from Ghana. The family plans to make the trip to the motherland one day to see all the family members who are undoubtedly anxious to meet them.

Until then, Chris plans to continue instilling into his children the morals and values that made him who he is – a humble island boy who has, in his own right, conquered the world.

“A part of the key to my success has has been not being distracted – staying focused,” he said, adding he has enjoyed having mentors around him and people who wanted to see him do well.

“I love my country and I love doing what I do, and if I could do it all again, I wouldn’t change anything.”