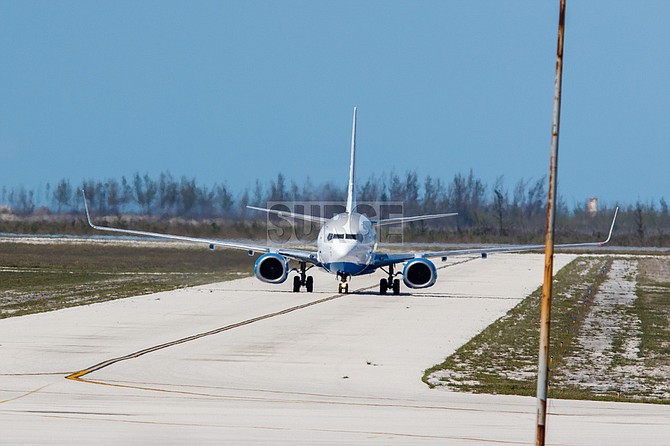 THE man who flew to Grand Bahama on Friday despite testing positive for COVID-19 was one of four people from the same household who were not on Bahamasair’s initial list of people slated to join the government’s repatriation exercise.

Prior to boarding the flight, the other three people produced a negative COVID-19 test result, The Tribune understands. Consulate General officials from Florida reportedly told the airline the four were cleared for travel, sources said.

Repatriation exercises on Friday involved two flights from Fort Lauderdale to The Bahamas, the first since the COVID-19 lockdown began weeks ago. The first flight had 88 people who flew directly to New Providence.

The second flight, which departed at 3.20pm, went from Fort Lauderdale to Freeport where 51 passengers disembarked, then flew to New Providence where 44 people disembarked. The man who tested positive and the three other people from his household disembarked during the Freeport leg of the trip.

The Tribune was told that when the four people showed up to Bahamasair’s counter at the Fort Lauderdale International Airport on Friday, the airline’s staff told them they were not on the list provided by the Consulate General office in Miami. The family was subsequently referred to representatives of the Consulate General who, upon their arrival, informed Bahamasair that their list included the names of the four people. The four were then added to Bahamsair’s manifest, which is the final list of passengers and crew that is filed before an airline departs.

The Tribune understands that some of Bahamasair’s senior staff were involved in making arrangements and the airline’s position is that it facilitated the government’s requests as directed by the Consulate General’s Office in Miami and did not play a lead role determining who would be allowed on the flight. The list Bahamasair had, The Tribune understands, did not contain information about COVID-19 test results.

Bahamasair’s list initially had 190 people, though 183 people ultimately flew with the airline. It is not clear if there were other discrepancies between Bahamasair’s initial list and its manifest.

Linda Mackey, the consul general for The Bahamas in Miami, could not be reached for comment yesterday.

Prime Minister Dr Hubert Minnis said on Sunday an investigation will be launched into how the COVID-19 positive person was allowed on the flight. The policy is that only people with a negative COVID-19 test result could return to the country.

Dr Minnis also said on Sunday: “Three individuals travelled with this passenger. All four of these individuals have been tested again upon arrival and we are awaiting the test results. All passengers wore personal protection equipment which decreases the risk of exposure. All passengers on the flight will remain in quarantine and will continue to be monitored. Pending the investigation and review of this matter, I have advised the airline and was also advised by the health officials to temporarily suspend the repatriation flights which we will resume as soon as health officials advise.”

It is not clear whether the test results for the four people have come back.

Can they detail exactly what this PPE involves? Was it just a mask? Because if you notice as people deplane everybody tends to hold onto the same railing for support.

This story makes no sense. It's one thing for someone who wasn't tested to show up, but for someone who was tested, made plans to travel was expecting to be home the next day and woukd have been highly motivated up to the last minute...then got a call the night before that he could not travel, and nobody thought to create a special flag to ensure he or his family didn't get through? This literally makes no sense.

There's been a focus on the one man. But it's the entire family who should not have been on the plane. Anytime from the time they took the test to days later when they arrived at the airport the remaining three could have been infected

There are too many suspicious characters popping up - not to in the interest of all the rules governing full and open transparency, not to publish all unedited, undeleted passengers manifest's for all commercial and private flights landing anywhere on anyone we colony's 700 islands and cays, including private landing strips over the past 60 days period -to be shared forthwith shared with the PopoulacesOrdinary at large!
I've been informed that there were but 94 onboard both flights combined who are actual citizens of the colony? The two planes had to have flown with flight crews - were they also placed under army guards quarantined? Imagine had I just made up a tall tale about how an actual government official stationed abroad - themselves managed board one the Mercy Flights COVID-19's bound for the colony? Some government officials must be closely looked at for suspension without pay until a full and independent Probe is conducted and reported back on all murky matters surrounding Mercy Flights COVID-19, and private flight landings. Nod yeah, yeah, yeah!

All this hot air about one infected Bahamian is a joke. The U.S. airlines are scheduled to begin operations to Nassau in a few short weeks and Carnival has said they have a 600% increase in cruise bookings with the intention of sailing here beginning August 1st.

What is the protocol for opening the borders restarting tourism into the country? How will we protect ourselves from potentially infected visitors?

Is this government going to simply roll over and allow the airlines and cruise ships to do as they please as usual?