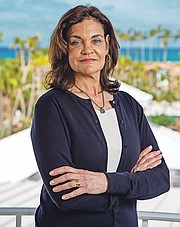 Atlantis’s top executive says there is “light at the end of the tunnel” as the Paradise Island mega resort targets the June 15 re-opening of its Royal Towers as the first stage in a phased return.

Audrey Oswell, the property’s president and managing director, told its near-8,000 staff via a video message that those workers required for its “phase one” re-opening will be contacted within the next 45 days.

Reiterating that Atlantis and the Bahamian tourism industry remain in “uncharted waters” due to the COVID-19 pandemic, she added that it was impossible to predict when business volumes would recover to previous levels.

As a result, she told staff who did not receive a recall e-mail to remain on “furlough” or temporary lay-off, promising that Atlantis was “doing our best to bring back as many of you as quickly as possible”.

Ms Oswell’s remarks emerged as the Prime Minister, in his national address yesterday afternoon, said the Government was targeting a resumption of commercial air travel “on or before July 1” in a clear indication that it is eager to quickly attract as much tourism business - and associated foreign currency inflows - as rapidly as possible given their critical importance to the economy’s well-being.

Dionisio D’Aguilar, minister of tourism and aviation, told Tribune Business he was focusing on the “before” component of Dr Hubert Minnis’s address, revealing that the tourism industry had advised the Government that the period June 15 to July 1 was when it felt it would be ready - and safe - to receive visitors again.

“He said ‘on or before July 1’, so I’m focusing on the before,” he said. “July 1 is a possible opening date, so we have a goal now, opening the country to tourism again. Hopefully we will do it.... They’re [the tourism industry] the ones who advised us they would probably be ready by mid-June.

“They gave me a date of June 15 to July 1. We’ve obviously gone with the most conservative date hoping we’ll meet the deadline we’re really wanting, which is mid-June. There are some jurisdictions opening at the beginning of June.”

One such jurisdiction is the Florida Keys, which is aiming to open on June 1. Mr D’Aguilar indicated yesterday that The Bahamas cannot afford to remain closed for much longer given the damage this was doing both to its tourism competitiveness and wider economy, which is reliant on the industry for more than 50 percent of its employment and 40 percent of its GDP, as well as the bulk of its foreign exchange earnings.

“Mass tourism is probably going to be a thing of the past for a little while given that the US unemployment rate has grown to 30m,” the minister admitted. “The US needs to get on the other side of this and return to normal. It will be a while before we get back to 2018 and 2019 numbers, but we have to start.

“We have to get cranking again. We cannot afford to continue with zero tourism. That’s unsustainable, as everyone is beginning to find out.”

Ms Oswell, meanwhile, in a video message that circulated on the May 15 date that Atlantis had targeted to re-open, acknowledged the uncertainty and economic “hardship” that COVID-19 and the subsequent national lockdown had caused employees and their families.

“It’s not been easy for any of us,” she said to staff. “This pandemic has taken its toll on people around the world, many of them friends and family. As we continue to navigate uncharted waters, your well-being and the long-term success of the company is at the heart of every decision we have made. We are very much aware of the economic hardship this pandemic has placed on you and your family.”

Seeking to boost morale, Ms Oswell praised staff as “the foundation of Atlantis” and said their attitude had “fuelled” management’s resolve. “As we look ahead we can now see the light through the tunnel,” she added. “We will move forward deliberately with the fortitude and knowledge that the decisions made in the upcoming weeks will not be easy ones.”

Confirming that Atlantis has been working with the Government, other resorts and tourism industry players, and the airlines to develop the necessary health protocols to keep guests and employees safe in a COVID-19 world, Ms Oswell said: “We expect to re-open the resort on a limited scale some time next month [June].

“No one really knows when tourism will recover to previous levels, but what we do know is that we are planning for a phased-in reopening. The Royal [Towers] will re-open first.” Restaurants and some other Atlantis amenities will also re-open at the same time. Tribune Business sources suggested that between 1,000 to 2,000 workers could be recalled for the Royal Towers re-opening, but this could not be confirmed.

Ms Oswell said employees required for the first phase re-opening will be notified by e-mail within the next 45 days. “Those not scheduled until a later date or phase two will not receive a notification, and continue with your furlough,” she added.

“We appreciate your patience and know that we are doing our best to bring back as many of you as quickly as possible. You must understand that not everyone can come back until business returns to previous levels.”

Atlantis’s target re-opening date is at the front of the period targeted by the Bahamian tourism industry. The Prime Minister last night indicated that the “on or before July 1” timeline was not set in stone, and can be adjusted or pushed back, especially if there is a new surge in COVID-19 cases or the tourism sector feels its health and safety protocols are not ready.

Robert Sands, Baha Mar’s senior vice-president of government and external affairs, said Atlantis’s mega resort rival was “planning for reopening but has not set any specific dates” for this to occur.

Open to the Americans in July???? I don't know bout that.... Uh uh... They aint exactly handling this pandemic well. I don't want em on my island in July.