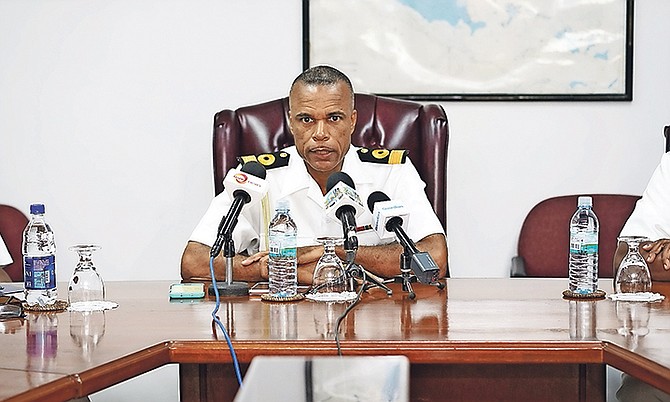 RAYMOND King will formally take over the command of the Royal Bahamas Defence Force at a ceremony this Thursday, putting an end to speculation about the return of Commodore Tellis Bethel.

Commodore Bethel has been on leave since last October and officials evaded giving clear answers on when he would return to the force. Captain King served as acting commander in his absence.

According to a press release from the RBDF, the change of command ceremony is a military tradition that is held when a head of a military establishment or ship demits office, and a new one is installed.

During this ceremony, Commodore Bethel will formally bid farewell to the men and women who served under his command.

Commodore Bethel was confirmed as commander on May 3, 2017 after serving two years as acting RBDF commander.

Prime Minister Dr Hubert Minnis will give the keynote address.

In keeping with social distancing protocols, the ceremony’s guest list is streamlined and by invitation only.

Captain King will officially become the eighth person having attained the rank of commodore and being appointed RBDF commander.

I am serious, they are handling these changes/promotions, etc. so poorly. Dames got some serious issues. Dames and Minnis must be best friends cause they really act a lot alike.

No Games, Tight Pants is in the abyss. Only a real fool would believe he is not behind all of this madness.

The affect of his actions are all before him.