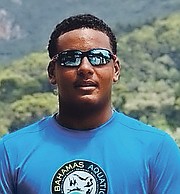 Gabriel Sastre Jr became the latest addition when he committed to join the Wagner Seahawks this fall.

“Wagner was an easy choice as it contained everything I’d hoped for. It is an excellent NCAA DI water polo school, it’s an excellent environment to pursue business and a quiet yet fun place to experience new things,” Sastre said.

“I hope to bring Wagner the best of my ability and skill sets, athletically and academically,” said Sastre. “I wish that I can bring success to the Wagner men’s water polo team to achieve a MAWPC championship and more.”

Sastre has been a member of various junior national teams and was a member of the CARIFTA Under-16 team that won three consecutive gold medals. His teams also won silver at the CCCAN Championships and secured Youth Pan Am Games qualifications. Sastre also earned the opportunity to compete at USA Water Polo National Junior Olympics and joined GEBA Water Polo Club for a successful national tournament title run in Santa Fe, Argentina. Sastre is the third member from those talented sides to acquire scholarships to play water polo at the collegiate level.