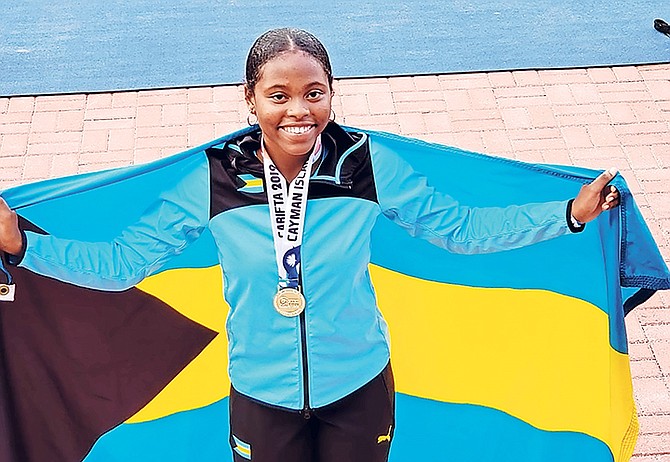 Rhema Otabor, already established as one of the top junior female javelin throwers in the region, is heading to Florida International University in Miami, Florida, in August.

Otabor, 17, signed her commitment form on May 12 and she intends to pursue a degree in mathematics with a concentration in statistics.

She decided to transfer from the University of the Bahamas to FIU. “When I visited the school, I liked the energy from the team and the fact that the school is a very small one,” Otabor said.

“I prefer the small schools.Plus their javelin programme has had some positive outcomes and I believe that I can go there and excel as well.”

Otabor, who sat out one year after she graduated from Nassau Christian Academy because she was a bit too young to compete for college, is the two-time under-18 girls’ javelin champion and current record holder at the CARIFTA Games, the top junior regional competition. She had qualified for this year’s CARIFTA Games in Hamilton, Bermuda, which was called off because of the spread of the coronavirus pandemic. She still has one more year of eligibility, but will have to wait to see when she reports to FIU whether or not she gets her release for next year’s team.

Otabor is also the Bahamas junior national record holder with a lifetime best of 47.95 metres or 157-feet, 3-inches, a feat she achieved on January 11 to place her at No. 30 on the World Athletics’ top performance list for 2020. She was looking to improve on her performance this year, but the coronavirus put a dent into her plans as the remainder of the track and field season was cancelled because of the coronavirus that surfaced around the world in March. “It was hard to train because you could get distracted being at home,” Otabor said. “I’ve been doing some small workouts and ensuring that I stay in shape with my javelin drills.

“I was able to put my books down from the University of the Bahamas, but I’ve been watching some videos from some of the top javelin throwers so that I can stay on top of my game.”

As she prepares for FIU, Otabor said she hopes that she can gel with her team-mates and she can achieve some of the goals on her bucket list.

“When I go to college, I hope that I can break the school record and I can win the NCAA outdoor title for my event,” she stated.

Her coach Corrington Maycock, head coach of the Blue Chips Throwers Club, has been working with Otabor for the past three years and he has been quite impressed with her progression.

“She was ranked fifth in the world as a junior female competitor in the javelin before the coronavirus stopped everything,” Maycock said. “She was going to go to CARIFTA and win the title, but she still has one more year left, so hopefully they will release her next year so she can come back and break the under-20 CARIFTA record and win the gold.”

Maycock said Otabor is eyeing Lavern Eve’s national record in the javelin of 63.73m (209-1) that she established on April 22, 2000 in Nashville, Tennessee, but he admits that it’s a long shot.

Otabor thanked Maycock, as well as Letetia Dean and Tiffany Bullard, who both helped to take care of her and grow her up after her mother passed away. She is sister of Michaelangelo Bullard, also a member of the CARIFTA team, along with Aleah Otabor.