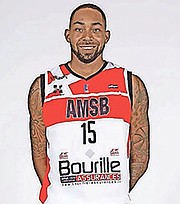 JARAUN “Kino” Burrows is set to make a return to a former club as he makes another move in the LNB French Pro B League.

Burrows has signed with the FOS Provence-Basket Byers for the upcoming season which will mark his second stint with the team.

The veteran forward spent last season in the LNB French Pro B League with Aix-Maurienne Savoie. In 22 games with the club, he averaged 13.8 points, 5.8 rebounds, 2.9 assists and 1.3 steals per game. He was also named league Player of the Week twice.

The two teams met several times last season, twice in the regular season and once in the Paris Leaders’ Cup. Burrows averaged 18 points per game in the three meetings.

Burrows first signed with the Byers in April 2017 for a late-season playoff run. In 12 games, he averaged 10.7 points, four rebounds and three assists in just over 25 minutes per game and the team reached the Pro B semi-finals.

In 2018, in his first full season with the club, Burrows averaged 13.9 points on 61.5 per cent shooting from the field and 5.1 rebounds in just over 25 minutes per game. He helped the club to a French LNB Pro B title and was granted promotion to Pro A for the first time in club history. Following the title, he reached an agreement on a contract extension with the club.

The following year, Burrows concluded his previous stint with the Byers in an injury plagued season when he averaged 8.6 points and 3.4 rebounds per game.

Prior to his French debut, he spent the bulk of the 2016-17 season for Hapoel Haifa in Israel’s Liga Leumit - the second tier level league in the country. He appeared in a total of 26 games for them and averaged 21.7 points and 9.8 rebounds per game.