'It Made Me Feel Like A Criminal Even Though I'M Trying To Do Right . . . To Stay Out Of Harm's Way And To Help My Family' 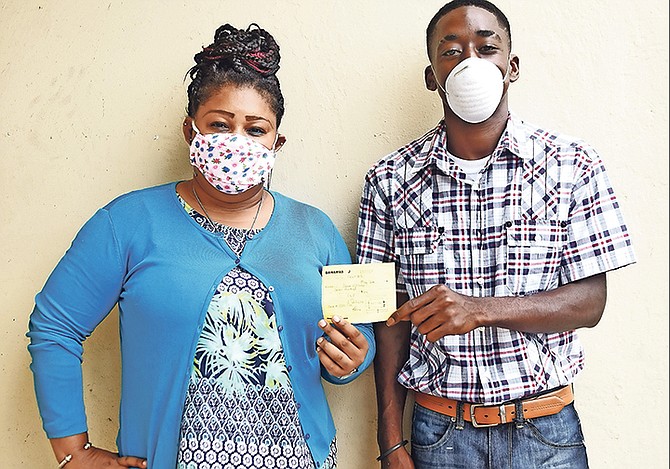 Khandi Gibson along with some of her friends helped raise the funds to pay Jason Williams’ $700 fine for selling coconuts. Photo: Shawn Hanna/Tribune Staff

GOOD Samaritans raised $700 to pay court fines for a teenager who was arraigned earlier this week and convicted for selling coconuts roadside without a business licence and in violation of the 24-hour curfew.

The story of Jason Williams’ legal woes, reported by The Tribune earlier this week, made the rounds on social media, eliciting an outcry from some who saw the matter as an injustice against a young man trying to make a living.

In an interview with The Tribune yesterday, the 18-year-old said in a society where too many young black men fall victim to gang violence and other crimes, he knew he wanted to be different from others and control the course of his own life.

So, about a year ago, he started his own business, selling coconut juice and jelly to locals and visitors throughout Nassau.

But, what was supposed to be another regular business day for Mr Williams last Friday ended up being the complete opposite. The teen was arrested around 3.20pm on May 15 for selling coconuts in breach of the national curfew and COVID-19 emergency orders.

Officers told the court on the day in question, the 18-year-old admitted to not receiving permission from the competent authority to be outdoors during the curfew.

Police also said after Williams failed to produce a valid business licence, he told them he was “working” on one. As a result, he was arrested and taken to the Grove Police Station.

Recalling the “frightening” experience yesterday, Mr Williams said the arrest made him “feel like a criminal,” despite him never having a prior run-in with the law.

He said: “I mean it made me feel like a criminal even though I’m trying to do right and trying to stay out of harm’s way and at the same time, trying to help my family. So, to be in the law hand, it just isn’t right man.

“… It was a little frightening for me because it isn’t like I’m a criminal. I don’t be up around those places. I mean they just doing their job and you can’t beat the law. But yeah, they should’ve used a little discretion towards me because it ain’t like I’m a bad person. I’m trying to become someone.”

Noting that life has not been easy for his family since the COVID-19 pandemic began, Mr Williams said he was just trying to make ends meet. His sister, he added, was the only one in the household who has been working since the pandemic.

“I just was selling coconut juice and the jelly to try to make something for me and my family,” he added. “It’s me, my mother, my father and my sister and my sister has kids. That’s the only person who was working through this COVID thing.

He was arraigned on Monday and pleaded guilty to violating the curfew and operating a non-essential business. He was ordered to pay $700 in fines or spend one month in prison. Calling the situation “disheartening”, local activist Khandi Gibson told The Tribune yesterday after she read about the teen’s ordeal online, she knew she had to help him. “That really broke my heart...because the prime minister spoke about ‘where is your heart, where is your compassion,’” she said.

“I’m like, my gosh, one minute y‘all saying let’s build up the young men and in another, you want to say let’s haul them before the court. And so, I feel like this is so wrong, especially during COVID-19 now.”

She made a post on Facebook and friends from Canada said they would pay half of his fines. Others came forward to donate the rest.

Mr Williams said he was shocked when he received a call from Ms Gibson, saying she and her friends would pay the fine.

He said: “I was already saying ‘where are we going to find this money from’ and my mummy ain’t working and thing and that was the only way I was making money so I was saying ‘I mussy was going jail.’ But something came around and God made a way and my bill was paid. Thank God for that too.”

Mr Williams is also thankful for the outpouring love and support expressed towards him on social media, noting that it was “a source of comfort” for him during those difficult days.

Asked yesterday what’s next for him, the teen said he will work on getting his business licence and also, his record cleaned.

“The good news is a woman said she is going to help me get my licence and like how she help me, I want to help others too and other people who coming up and in need. I could help them too,” he said.

Ms Gibson added: “It doesn’t stop here for him, what happens to his record now? I want his record expunged. This has to come off his record. This has to (as well as) many others who’ve been in this situation. We’re going to fight for this.”

FILIPINO woman who was caught jogging past the Cable Beach Police Station during the weekend lockdown was fined $2,000 yesterday. Helen Lacar, 41, was charged after officers found her on West Bay Street around 4.20 pm on Sunday, May 17.

Teran Sweeting, 24, was charged after officers found him on Shrimp Road around 10.05 pm on May 10. He pleaded guilty and was fined $1,500 or six months at BDCS.

Seems to court had a field day yesterday putting money in the Treasury So while we make reasonable excuses for being out beyond curfew time or feel sorry for those that get caught, here are examples of people who had excellent excuses. Stay home this weekend, $700.00 is nothing, but you might have it to pay ya fines.

So true @TigerB. You break the law you will suffer its consequences. Thank goodness the law is in place otherwise we would have everyone out doing as they please, in the name of "I have to take care of my family" and "tings tuff".

I like the young man and I hope he has learned his lesson. Follow the law and you would not have put yourself in this predicament. If he learned his lesson, he should have great success in the future. Good luck to him.

Seven hundred dollars is a whole lot of money for a young man struggling to make ends met. Shame on doc and Dames. where is their hearts and souls

The other day he was all about his weed story. he must know some one who wants to go into that business? he was going to open the jails and make weed legal

Doc is digging his own ditch and he will fall head long into it. .

I am happy for the young man and I pray that God will bless him . Young men seem to be at a disadvantage, especially the black ones.

People please stay inside during weekend lockdown.....if it's too expensive for, stay put.

Shameful! Totally shameful! I am at a loss for words.

His heart is in the heart place. He will pay it forward some day.

The great irony here is that in short order his MP will be coming around with a smile and a handshake to look for his vote. I hope he saved some of them coconut husks to pelt him with!

Kudos to those who helped pay his fine!

Some police are not the brightest Crayon in the box

$700 fine for selling coconuts in the Bahamas? Makes North Korea dem look like lambs 🤣 What a buncha mean jerks running our so-called democracy. Don't let the bad guys keep you down Mr. Williams. Hope you get that Business Licence soon. Should not be a problem with the new 'ease of doing business' now carried out by our wonderful band of civil servants! Best of luck to you!

They asked him for a valid business license well blow me down, all along Nassau streets persons selling any and everything and I'm positive they don't have any business license, do they go around and check? One must not forget our D-average policemen encourages violence so they can have and keep their jobs they feel if they do otherwise they won't have one. Today most of the D-average policemen on the force were most likely bullied in school for being D-average and now they have found an organization where they can bully others legally and get away with it.

What makes this even more dumber is if i recall May 15th was a friday, and at 3:20pm the island is filled with people driving up and down the road, even think i saw some guys selling peanuts, some water, some gatorade, think i even saw a young guy selling some face masks, actually think i saw a guy selling cell phone charger chords as well. I guess the police was "just liking man" that day.

Jason Williams you are a martyr and an entrepreneur and learned to stand up for what is right for you, for your family and your country. Laws are meant to be changed and you are a prime example leading the way that the current law is unlawful. The fines the government collects are sources of revenue for the government as they have screwed up the economy so bad that they need money.

The Good Samaritans bless you for helping Jason. Know in the future that Mr. Williams, will be one of the people supporting the rights of residents of the Bahamas.

The Police Officers, in this case, should be called out. They could have simply used a little discretion and advised the 18-year old to cease and desist. However, to arrest him and haul him before the courts seems a bit of over-reach.

😫😨😨 seriously, this is one of the DUMBEST arrests I've heard in a long time...the police really couldn't use their discretion in this matter? REALLY!! OMG!! And just think, the courts went along with them...where is their heart? Do they have a soul? They wonder why the young men in the Country go astray, it's silly things just like that. If he was 'Mr. so and so's son' it would have never happened but in this Country of ours...it's who ya know for sure. Mr. Jason Williams, don't lose heart, don't be discouraged. I am happy to know you received help...Khandi Gibson is a good person!! God Bless you both and keep doing the great jobs you're both doing!!

So what happened to all the evidence "for selling coconuts....", ie containers, coconuts, proceeds etc ....???

I have seen many persons selling items on the side of the road who don't appear to have business licenses.Items like gift baskets,crabs,fish and fruits.Yet these persons are not questioned by the police.

A foreigner said to me who use to live here,said to me,the Bahamas seems to operate like a backward Kafka like society.He just laugh and shake his head at how things work here.