Stateside: The Great Game’S New Players - The Us And China 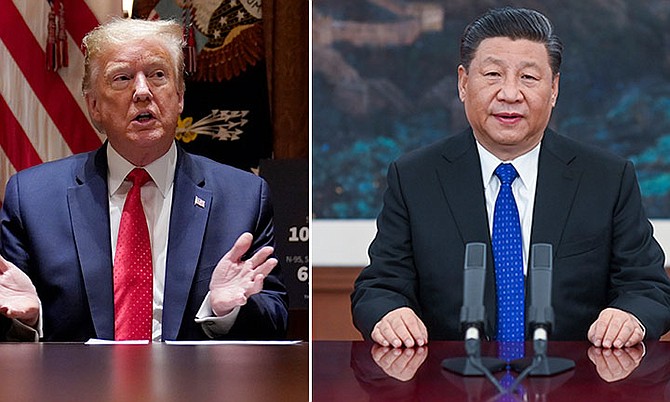 Is China in the process of replacing Russia in the political and geo-strategic life of the United States? Are the Americans about to get enmeshed in another decades-long Cold War with a new opponent to joust with in the ring of world affairs?

Six months ago, you could have gotten much longer odds on such a proposition. Last summer, the two-year-long Robert Mueller investigation into alleged Russian meddling in the 2016 US presidential election concluded with findings so ambiguous, legalistic and cautious that American President Donald Trump and his loyal Attorney General were able to blunt whatever sensational effect the long-awaited report might have had.

Then, right on the heels of Mueller wrapping up his probe, Trump got busted for extorting the new, reform-minded President of Ukraine to produce some dirt on then putative and now certain Democratic presidential nominee Joe Biden.

Even for Trump and his band of craven cronies, this was so outrageous that House Speaker Nancy Pelosi was forced to abandon her caution and initiate impeachment against Trump. That melodrama carried us into this new year.

While Ukraine has been independent from Russia since the Soviet Union broke apart and collapsed of its own massive inefficiency 30 years ago, most Americans would be extraordinarily hard-pressed to differentiate between these two Slavic giants. For many in the US, the two nations, linked as they are by a controversial border and linguistic, religious and some significant cultural commonalities, are virtually the same nation.

While the Cold War officially ended in 1991, Russia has seldom been out of US headlines for long. But when Vladimir Putin emerged at the helm of Russia after a decade of corrupt, incompetent democratic experimentation at the turn of the century, the door to an American positive engagement in rebuilding Russia officially closed.

Putin is an unabashed Cold War warrior who openly yearns for a bygone era when the USSR contended with the US, at least militarily, on seemingly even terms for influence in the world.

Mikhail Gorbachev had realised those days were over when he took over as the head of the Soviet government in 1985. After his attempts to restructure the rotting and inefficient Communist economy failed, he presided over the end of an empire and the end of the predominant international rivalry of the first 45 years after World War II.

While Putin’s longing for the Soviet glory days ensures he enjoys much more popularity domestically than has any American President since Ronald Reagan, the fact remains he presides over a sprawling empire reliant on oil, natural gas and other raw materials for its foreign exchange and one forced to turn to cyber skullduggery, cynical military opportunism in the Middle East and elsewhere, and other dirty tricks to exert influence in the world of international politics.

Putin and the Russians are good at these activities. But this is not the stuff of a bipolar international competition of relative equals with the US.

Back in the mid-19th Century as the modern industrial age was starting to roll, iconic socialist theoretician Karl Marx wrote that imperialist nations needed foreign military conflict and economic confrontation to feed and stimulate their socio-economic advancement. American behaviour on the world stage over the past 60 years may represent a reasonable validation of Marx’s theories.

Following that logic, America needs someone with whom to spar. If Russia is not what it used to be four decades ago, who will step into the ring with our western neighbour? The other protagonist on the international stage with America is now clearly China.

Despite stubbornly sticking to a Communist ideology that helps to justify repressive central political control, the Chinese leadership has fostered an economy that ranks second only to the US in the world.

Shrewdly and resolutely pursuing global geopolitical interests, China, especially since gaining entry into the World Trade Organization at the start of this century, has come to exert influence in every corner of the world.

Even here. It is safe to say very few Bahamians can say their lives have been untouched by Chinese influence and investment in this country since Beijing replaced Taipei on the roster of Nassau’s foreign resident missions in 1997. From Baha Mar to the port development at Freeport to numerous other public works projects, China has certainly made an impact in The Bahamas.

As we know, Bahamians are not unique in this regard. Chinese financing has exerted increasing influence throughout the world, from Burma and Sri Lanka to Sub-Saharan Africa to Central Asia to South America, elsewhere in the Caribbean and Italy.

Not to mention the United States. Though Chinese foreign direct investment in the US has dropped sharply since Trump ramped up the pressure for what he calls more equitable mutual trade and economic relations between the two giants, China and the US are still deeply enmeshed in each other’s financial affairs.

Does this mean we’re in for decades of aggressive rivalry between the US and China? Some think so.

Behind Trump’s posturing and bombast about China since before he was elected is a widely held perception – not just in the US – that China has accelerated its commercial advancement by means from unscrupulous to illegal. Brazen theft of other nations’ intellectual property is a frequent allegation. When the American President fulfilled a campaign promise to face down the Chinese, many outside the US joined his domestic supporters in cheering, if often quietly.

In the present age of COVID-19, Trump called this scourge the “Chinese virus” for a while. His loyal ally and Secretary of State Mike Pompeo still issues regular press statements critical of China for its actions, or inaction, as the coronavirus has developed into a worldwide killer. The State Department and Chinese Foreign Ministry are presently engaged in a diplomatic row as they curtail the work visas for each other’s journalists.

The respected Pew Research Centre has found that Americans now view China more negatively than at any time in the past 15 years. Americans often criticise the now ubiquitous presence of Chinese (and other Asian) students in prestigious educational institutions in the US.

“Why are we training their students when they’ll just try to steal our industrial secrets and use them to get ahead of us?” is a common refrain. That view is sufficiently widespread in the US that its counterpoint became the focus of a major lawsuit last year.

A group representing Asian American students argued that Harvard University had favoured black and Hispanic applicants at their expense — a reversal of past affirmative action lawsuits in which the plaintiff complained that white students had been treated unfairly. Harvard successfully defended the suit, but its traces linger.

China’s leadership has hardly reacted quietly to these various provocations. As befits a global behemoth, China has pushed back hard, mostly rhetorically for now. COVID-19’s origins in Wuhan may have besmirched China’s worldwide reputation, but Beijing’s plans and ambitions do not appear to have abated. China is in the game to win.

Some respected scholars think the two nations are headed for inevitable, worsening long-term conflict. The director of the Centre for US-China relations at the respected Asia Society in New York told a business-based website that “we’re essentially in the beginnings of a Cold War. We are on a downward slide into something increasingly adversarial with China.”

London’s Financial Times was more measured, quoting a China expert who said of US-China relations that “strategic competition will remain the dominant paradigm going forward. The question is whether it tilts toward permanent and all-out hostility.”

After the pandemic has hopefully subsided, and after the November US elections, we might see who was right.

As the NFL continues to try to shrug off the coronavirus and begin preliminary preparations for its 2020 season, the league continues to try to deal with the uncomfortable fact that only four head coaches and two general managers are black or Hispanic in a league where nearly three quarters of the players are minorities. A proposal to offer incentives to teams that hire and retain minority coaches and executives was shelved at the owners’ meeting this week, but the issue will persist.

For the first time in league history last month, more than half of the players selected in the first round of the NFL draft were represented by black agents.

That’s the attitude that led some black coaches to speak out against the approach offered by the league this week. So far at least, their agent counterparts are making more headway. But change does seem inevitable.