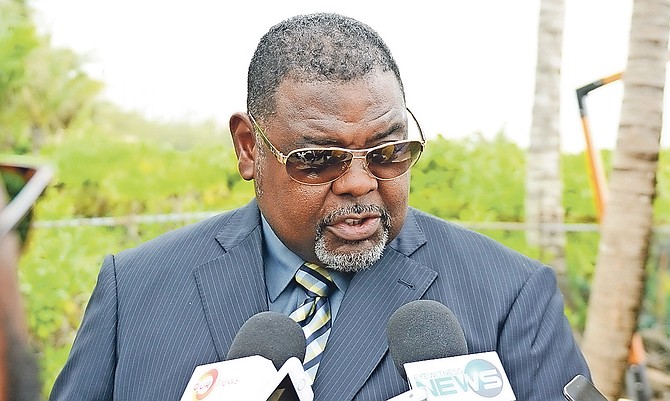 The Grand Bahama Shipyard has terminated 27 workers, including several long-serving managerial staff, due to a further slump in business caused by the COVID-19 pandemic.

"They gave us ample notice," Mr Pinder told this newspaper. "Everyone is using the COVID-19 as a reason for terminations. That's what they [the Shipyard] say; that it was due to COVID-19, lack of business and no ships coming in."

Dave Skantelberey, the Shipyard's chief executive, declined to comment on the terminations when contacted by Tribune Business earlier this week. However, one source with knowledge of the situation, told this newspaper that the Shipyard had been "walking a tightrope" after COVID-19 created the perfect storm for its operations.

A key player in Freeport's industrial sector, the Shipyard lost its largest dry docking facility when it collapsed in summer 2019. Its major shareholders, Carnival and Royal Caribbean, which each hold a 40 percent equity stake, had been planning to invest up to $100m in a replacement dock that was billed as the "largest" such floating facility to be built anywhere in the world over the past decade.

However, the cruise industry's COVID-19 enforced shutdown, which has forced Carnival and Royal Caribbean to each raise billions of dollars in additional financing to help them ride out a period in which they are earning zero revenue, is likely to mean fresh investment will be placed on the backburner for a while.

That is likely to include the Shipyard's new dry dock, which faces being added to a list of planned Bahamian investments - the Grand Lucayan and Freeport Harbour; Carnival's Grand Port; and other private island destinations - by the cruise lines that will likely be subject to delays once the pandemic is over.

Tribune Business was also informed by contacts, speaking on condition of anonymity, that the Shipyard had been impacted by the border closures implemented by the Government on March 20 to prevent COVID-19's spread as it relies heavily on a rotating cast of specialist expatriate employees to be brought in.

And, with health protocols requiring all incoming ships' crew to be quarantined for at least 14 days, their interaction with Shipyard staff - a key element in vessel repair, overhaul and fitting out - has also been interrupted.

"The Shipyard is desperately keen to stay open and is trying as best it can to keep as many employees on as possible," one source, speaking on condition of anonymity, said. "They had the accident with Dock number two last summer, and Carnival and Royal Caribbean were considering investing in a new one. COVID-19 has intervened."

Giora Israel, Carnival's senior vice-president of global ports and destination development, told Bahamian media in February 2020 that the accident had reduced the Shipyard to just 25 percent operating capacity. He said the investment in a replacement, which had not been finalised and was in the beginning stages of discussions, would also feature infrastructure development to expand the Shipyard’s capacity.

“We are determined to make this yard again a great yard, possibly bringing it back to the number one cruise ship repair facility in the world,” Mr Israel said. “(The dry dock) will be the biggest floating dock to be built in the last decade anywhere in the world, and it’s likely to be built in China.

“We are now in a situation that is obviously not very welcome in Grand Bahama of having the world’s largest cruise ship repair facility really crippled and its production gone down dramatically."

Hundreds of expatriates had already been laid off then, and forced to return to their home countries. The Shipyard, at that point, had committed to employing all its Bahamian staff on a 40-hour work week schedule even though it could have released around 100 due to the drop-off in work demand.

“We are just sweating it through until we are able to get the operation back,” Mr Israel said. “We have a lot of pressure from shareholders to support our operating expenses, obviously labour, but also our debt servicing for the loans that are outstanding at the yard. The cruise lines that are 80 percent owners of the Shipyard, Royal Caribbean and Carnival, have not yet taken out one single penny of a dividend.”

The Grand Bahama Port Authority's (GBPA) affiliate, Port Group Ltd, owns the remaining 20 percent of the Shipyard. But, with the cruise lines' balance sheets and financing likely to be strained for some time to come, it is likely that the Shipyard will have to find alternative means of financing a new dry dock.

Another contact, also intimately familiar with the Shipyard's operations, said: "Although they can open as an essential service, the problem is they cannot bring in any of the ships from abroad. There is a lot of interaction between the ship's crew and their employees.

"It's not an isolated work environment, and everyone coming in has to be quarantined for 14 days. That has brought work at the Shipyard to a standstill in terms of ships from abroad. They're trying to maintain as much of the workforce as they can.

"Having taken so long to train people they don't want to lose anyone. It's a bit of a tightrope. The Shipyard is pivotal to Freeport's economy. They're making a really hard effort to keep as many people as possible and not terminate or furlough. It's a real challenge."

Further sources also confirmed the financial pressures facing the Shipyard, with one confirming they were aware that the company had been "toying" with the terminations confirmed by Mr Pinder. "It's difficult to run the business if you cannot bring in people from out of the country, especially specialist people," they said.

The contact added that the Shipyard had managed to keep all staff on full pay for the first six weeks of the pandemic, and had then moved to a rotation of "one week on, one week off". This was confirmed separately by other sources, who suggested the terminations involved 29 persons or numbered in the low 30s.

"Some of them were senior managers," one added. "They got paid put fully. I think they tried their best to keep them on board, but they were not getting any ships for a while."

The Shipyard, though, as well as retaining strong shareholders also has a location advantage given its proximity to three of the world's three largest cruise ports in south Florida and multiple shipping lanes.

Another devastating blow for Grand Bahama. This is so unfortunate.

Wow. The irony, we were Oh so very concerned and critical of carnivals ventures, very concerned about who should and shouldn’t get what and who gettting this and that, now we all may suffer together, no one will have nothing, and gb once again will have to grin and bear it.

Ahh, I see, Port Authority. Explains quite a bit.