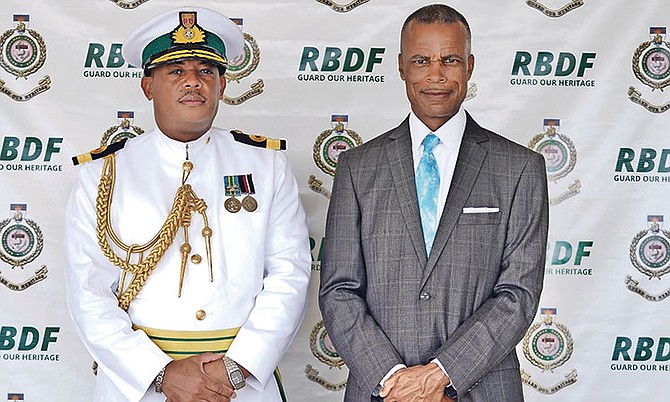 RAYMOND King, left, was officially sworn in as the newest commander of the RBDF yesterday, taking over from Tellis Bethel. Photo: Terrel W Carey Sr/Tribune Staff

RAYMOND King was officially sworn in as the newest commander of the Royal Bahamas Defence Force yesterday, becoming the eighth person in the country to have attained the prestigious rank.

The change of command ceremony, which was held at the RBDF Coral Harbour Base, was attended by Governor General Cornelius A Smith, Prime Minister Dr Hubert Minnis and Minister of National Security Marvin Dames.

Guests were limited at yesterday’s ceremony in view of the country’s social distancing policies amid the COVID-19 pandemic.

While congratulating Commodore King on his newest role, Dr Minnis noted that the new commander takes over at a pivotal time in the country’s history.

In view of this, the prime minister reminded the newly appointed commodore of his great responsibility to protect the Bahamian people. 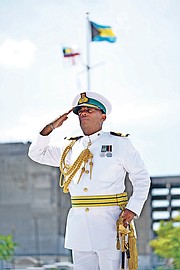 “Your service as commander comes at a critical time for our nation, especially during the COVID-19 pandemic,” he said. “You have assumed command as the nation is still in the reconstruction phase in Abaco, the Abaco cays and Grand Bahama, after one of the most powerful hurricanes ever in our region.

“The country will rely on your experience, commitment and leadership during these extraordinary times. You must continue to set the standard of excellence in leadership, integrity and innovation in guarding our heritage and protecting our borders.”

Commodore King was named to the post after serving for several months as the acting commodore of the RBDF in the absence of outgoing Commodore Tellis Bethel.

Mr Bethel was placed on vacation leave last October as a part of a move by the Minnis administration to prevent officers from accumulating so much vacation leave that they have to be paid substantial sums of money when they retire.

After months of speculation surrounding the return and the future of Mr Bethel, Mr Dames finally confirmed to reporters on Tuesday that the senior officer will be transferred to the Ministry of National Security, adopting a new role there.

While he did not address what his duties will now entail at yesterday’s ceremony, Mr Bethel noted that it was a privilege for him to have served officially as commodore, working alongside such dedicated and hardworking officers.

He was confirmed as RBDF commander on May 3, 2017 after serving two years as acting commander.

“As this chapter in my life draws to a close, I can honestly say it has been a profound honour and a privilege to have served alongside the men and women of the best little navy in the world, for whom I have highest regard,” he said. “Whether in the air or on land or on the high seas, it has been an utmost pleasure and rewarding experience. Your hard work and dedication and many sacrifices have been a never-ending source of inspiration for me.”

He also congratulated Commodore King on his new appointment.

After receiving his instruments of appointment yesterday, Commodore King pledged to protect the country’s territorial borders from outside threats and to also assist with disaster relief efforts and other additional duties outlined by the National Security Council.

He said: “Command priorities under my leadership will include: the transformation of the organisation’s culture and command climate to one of inclusiveness, value congruent or the reinforcement of the institution’s ethos and military discipline, military tradition and military’s custom servicewide.”

Commodore King said he also plans to focus on “organisational restructuring” to achieve the RBDF’s ideal force design, mission readiness of its human capital, land and sea assets and fleet maintenance. “Therefore, the organisation’s strategic vision is to develop a professional and high-performance workforce focused on performance excellence,” he said.

Commodore King has served in the defence force for more than three decades.

Co'mon, Mr. Minnis, reveal it?
First official naval act the colony's newest comrade commodore Raymond is to dispatch a warship in search see if it's indeed on one colony's 700 private islands and cays that America's morning TV host Kelly Ripa, husband, and kids are marooned on due to CORVID-19. Nod once for yeah, Twice for no?

Congratulations to Dr. King. Wishing you as successful tenure. Your accomplishment show that despite humble beginnings, education, coupled with hard work, is a prescription for success. A good example for our young men and women. Also, a mention of gratitude to Mr. Bethel for your service.

It's indeed better to be marooned with family on Gilligan's Island, one we colony's 700 out islands and cays.