Pair Jailed For Assault As Victim Criticised For Not Walking Away 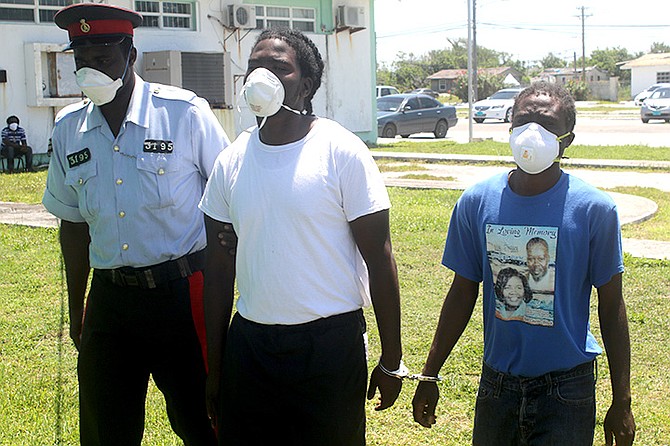 A GRAND Bahama magistrate sentenced two Eight Mile Rock men who assaulted an 18-year-old girl to five months in prison, but also strongly admonished the complainant and her female friend for not “walking away” from the altercation.

During an arraignment in Eight Mile Rock Magistrate’s Court yesterday, Magistrate Gwendolyn Claude rebuked Ramell Clarke, 32, and Allen Robinson, 23, both of Seagrape, for causing harm to the 18-year-old high school student, who also appeared in court along with her witness Shannia Lauriston, a college student.

Clarke and Robinson pleaded guilty to the charge of causing harm. In addition to imposing a five-month custodial sentence, the judge also ordered the men to each pay a $3,000 fine.

According to initial police reports, shortly after 7pm on Monday officers were called to Seagrape, EMR as a result of an altercation between two men and a woman who was injured. She was taken to hospital, treated and later discharged.

A video of the incident posted on social media went viral and showed a young man hitting a woman with a piece of wood while she and another young man were fighting.

In the video, the complainant is reportedly seen running towards one of the men.

Magistrate Claude expressed her disappointment over the complainant’s conduct in the dispute and ultimately ordered both women to perform 50 hours of community service.

In a statement after yesterday’s proceedings the Ministry of Social Services issued a statement condemning the attack.

The statement read: “The Ministry of Social Services and Urban Development express grave concern on the recent circulation of videos across social media platforms, of two young women in a physical altercation with several men. The filming and sharing of such videos are grossly inappropriate, and insensitive. We strongly condemn all forms of violence against another person.

“Violence against women and girls is the most pervasive human rights violation with one in three women, globally, experiencing physical or sexual violence in her lifetime. We all must speak out against violence as a form of resolving problems and conflicts. All parties must use wisdom and walk away from conflict, arguments, disagreements and fights and call the police as soon as possible. We must focus on appropriate, helpful and useful responses and services for survivors and not on victim blaming. Strict and swift justice for perpetrators and offenders of such violence is crucial because it ensures justice for victims and demonstrates zero tolerance against such acts by the government and society.

“Communities, civil society and even private sector organizations, should work together with the police and justice system to ensure a coordinated response to ending all forms of violence in The Bahamas.

“The Bahamas currently serves as a member of the United Nations Human Rights Council (HRC) and has been a State Party to the Convention on the Elimination of All Forms of Discrimination Against Women (CEDAW) since 1993. The Bahamas is also a State Party to a number of multilateral human rights instruments and has signed more than seven International Agreements over the past 40 years, for the protection of all persons. As a country, we uphold our mandate to protect the rights, dignity and lives of those most vulnerable, marginalized and susceptible to violence, attacks, abuse, and bullying and we embrace our simple, moral obligation to discourage all forms of violence.”