NIB deals with 900 within three hours 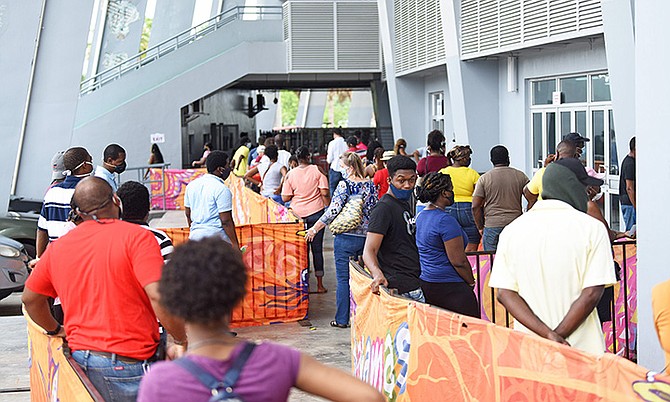 The NIB dealt with more than 900 people in three hours at its temporary office at the Thomas A Robinson Stadium yesterday.

THE National Insurance Board reported serving more than 900 people within three hours of operating its temporary satellite office at the Thomas A Robinson Stadium yesterday.

NIB took to its Facebook page to show the lines were cleared of customers around noon on the first day at the stadium. While canvassing the area, The Tribune noticed the line improved within an hour and only a few people were left by noon.

Although police and Royal Bahamas Defence Force officers were present, individuals were calm and practising social distancing under the shade.

Construction worker Michael Forsythe was at the site to pick up his unemployed wife's assistance cheque as she was looking after their young children.

According to the father, it has been challenging as he has been working “off and on”.

“The business I work for is exempt but it isn’t the way it used to be. I mean things are really slow.”

Life during the country’s lockdown has been difficult for the family, he said.

He added: “It’s difficult to say the least because my kids are always asking why they can’t see their friends. My wife is going stir crazy. Obviously economically we’re not doing that well, but we have health.

“...Obviously, we’re trying to conserve as best we can. There’s not much we can do because we don’t know what the future will be right now.”

Elroy Armbrister, 30, is another father trying to provide for his three-year-old child during the pandemic. Mr Armbrister has not been working since March, but his boss has been helping along the way and gives a few incentives. His landlord has allowed him to pay half the rent.

But navigating procedures during the crisis for him has been “annoying”.

“I can’t really put into words to say that I feel weak or depressed about it – it’s just life. Things that you can’t control and I realise that you know,” he said.

He was not sure if the unemployment cheques from NIB would be enough to survive as he did not know how much money he was receiving. Yet, he was appreciative of what he could get.

“...It may not be beneficial I would say pay rent or anything. Every little step, every little thing helps along the way hopefully it gets the ball rolling, you know,” he said.

“It’s a little head hurting you know but once you have something that helps along the way take it and you know keep it moving.”

Many people have been waiting weeks to get unemployment assistance.

Aldrinique Beneby, 34, said she has been waiting since the end of March to get her first unemployment benefit, but she has been able to manage through this pandemic.

“It’s been kinda okay seeing that I have a husband that kinda still worked from home and was able to take care of stuff and a bit of savings but the process of waiting for an unemployment benefit has been kinda tedious,” Mrs Beneby explained.

NIB advised that their customer service teams will be available at the stadium today and this Thursday to continue serving customers who are on an approved list for cheque collection.

This is great news. I'm not being "jokey" - i'm serious this time. It is very seldom that there is occasion to say anything good about any government of any Party both here and abroad.

In this case we must ALL be grateful and proud of the work of NIB in helping Bahamians. We often times in this country prove to be our own worst enemy - but this article has made me very proud to see people "stepping up" and doing what needs to be done. With this "helping Bahamians" approach, we may survive.