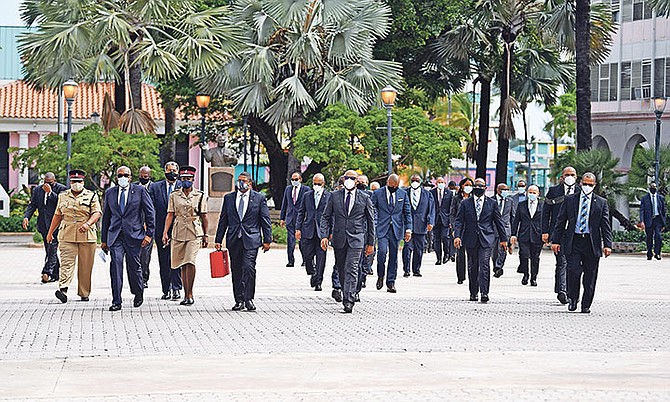 Members of the government head to the House of Assembly for the Budget presentation on Wednesday. Photo: Shawn Hanna/Tribune staff

The Bahamian economy will this year shrink by a greater amount than the government's projected $1.3bn deficit for the upcoming 2020-2021 fiscal year, the deputy prime minister revealed yesterday.

K Peter Turnquest, unveiling the 2020-2021 budget in the House of Assembly, said the Central Bank of The Bahamas is projecting that the economy will contract by 12 percent this year due to the COVID-19 pandemic combined with the lingering effects of Hurricane Dorian.

This shrinkage, equivalent to just under $1.4bn, is greater than the $1.327bn deficit that the government is projected to incur as a result of the massive borrowing designed to prevent the Bahamian economy's collapse as a result of the COVID-19 shutdown. The deficit is itself equal to 11.6 percent of GDP.

The deputy prime minister, meanwhile, conceded that COVID-19 had blown the government further off course from achieving the 0.5 percent budget deficit target mandated by the Fiscal Responsibility Act. He warned that this will now be achieved no earlier than the 2026-2027 fiscal year, pushing it out another two years from the revised post-Dorian fiscal estimates.

"Early estimates project that the government is now likely to achieve its 0.5 percent fiscal ratio no earlier than 2026-2027 - some two years beyond the first Fiscal Adjustment Plan," Mr Turnquest said.

"During this time, we are keen to ensure that our recovery is supported by the necessary fiscal reforms in the important areas of taxation, pension and state-owned enterprises operations, and the removal of structural obstacles to economic growth that would spur both domestic and foreign direct investment opportunities for the objective of promoting job creation."

Voicing optimism that the Bahamian economy will join the world in enjoying a "V-shaped recovery", with a rapid rebound following the present contraction as happened in previous pandemics, Mr Turnquest said the government was forecasting a 15.7 percent year-over-year revenue drop to $1.7bn for 2020-2021 compared to the revised post-Dorian figures.

Acknowledging that this represented a $328.1m reduction, Mr Turnquest said the government was allocating more than $250m to expand the business support, social assistance and unemployment benefits schemes provided to-date.

He told the House of Assembly that some $120m in tax credits and deferrals will be provided to large and medium-sized companies to help support their non-executive payroll for three months, with another $30m dedicated to the Business Continuity Loan initiative (see other article on Page 1B).

A further $48m in unemployment assistance is being provided, along with $17m on social welfare and related food assistance. Mr Turnquest said some $85m was being provided in 2020-2021 to strengthen the social safety net, with the Department of Social Services budget set to rise from $49m to $60m.

"Thus we have reduced a number of discretionary spending line items. This has meant that some 42 agencies and departments are receiving reduced Budget allocations for the upcoming fiscal year." Total recurrent (fixed cost) spending for 2020-2021 is forecast to be $2.6bn, some $35.3m or 1.4 percent higher than the revised figures for this fiscal year.

"The fiscal deficit is budgeted at some $1.3bn, or 11.6 percent of GDP, for the upcoming fiscal year," the deputy prime minister added. "This is the largest deficit to be incurred by any government in the history of The Bahamas. This is indeed a testament to the monstrous impact Hurricane Dorian and COVID-19 has levelled back-to-back on our small, open economy.

"While we have sought to trim where we could, our driving ethos has been to do all we can to support Bahamians and to maintain as much employment and economic activity as we can over the near term. During this time, the Government could have chosen to continue its fiscal restraint measures by cutting back spending and starving a deprived economy.

"However, we did not choose this route as we appreciate that during a downturn government spending is crucial to reviving a downtrodden economy. Again, these are unprecedented times that have called for unprecedented measures, and we are intent on ensuring the efficacy of our outlays in line with our overarching fiscal responsibility objectives."

Looking beyond the fiscal year-end, Mr Turnquest added: "Over the medium-term horizon, it is anticipated that aggregate revenue will gradually rebound to its pre-hurricane and pre-COVID-19 level over the next two fiscal years.

"This will place revenue at some 20 percent of GDP by fiscal year 2022-2023 before increasing to roughly 21 percent of GDP over the longer term horizon. To do this, the Government will have to keep up its track record of economic growth and its success in improving revenue collection.

"Recurrent expenditure, at some 22.4 percent of GDP in the upcoming fiscal year, is expected to remain relatively stable over the next two fiscal years, before tapering off slightly to 21 percent in fiscal year 2022-2023. Capital outlays are anticipated to decline from 4.5 percent in the upcoming fiscal year to steady around 2 percent over the medium term, which is in line with the Government's broader fiscal policy objective to make better use of public-private partnerships (PPPs) and secure private financing for public projects."