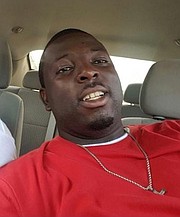 A MAN is dead and a ten-year-old girl is in critical condition after a shooting on Friday in Bel Air Estate. Two other people were injured in the incident - one from gunshot wounds and the other from injuries suffered while trying to escape.

The murdered man was identified by a source as Peron Bain - making him the country’s 28th homicide victim, according to this newspaper’s records.

On the scene, ASP Audley Peters said that a group of people were gathered in front of a residence at Belville Circle, off Iguana Way, shortly after 1pm when a gold coloured vehicle approached the residence.

“Three individuals exited the vehicle and walked in their direction discharging firearms at them. As a result, three persons were shot – one being a ten-year-old,” he said.

According to police, the murdered man was one of the gunshot victims. Two more were taken to hospital with gunshot wounds, while another person was taken to hospital as a result of injuries sustained while attempting to flee the scene.

David Rolle lives in the area and knew Mr Bain. Visibly affected by the killing, he positively remembered the deceased.

“He’s a cool person - down to earth. He willing to help people out, things like that… He wasn’t no troublesome person,” he told The Tribune.

When someone told him of the shooting, Mr Rolle tried to call one of the victims but he got no answer. He was later told that person was in hospital.

Asked what could possibly be the motive for his friend being targeted, Mr Rolle admitted he did not know. He simply suggested it could be people who had resentments.

“You know some people carrying some grudges and things like that. I wouldn’t jump to say but you know right now where we living in, people getting killed for nothing so you wouldn’t even know,” Mr Rolle said.

Drive-by shootings are a sign that Nassau is getting back to normal ...