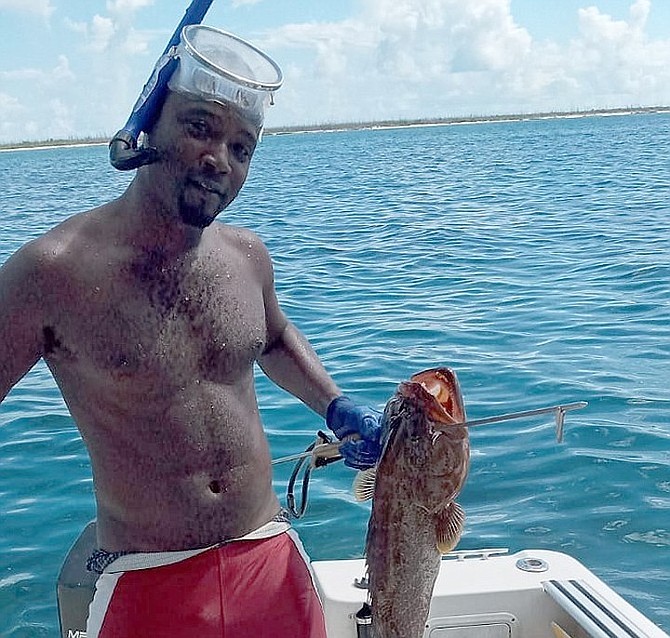 Spearfisherman Anthony Feaster is lucky to be alive after being bitten by a reef shark while spearfishing on Friday in waters off East End, Grand Bahama.

The Sweeting’s Cay resident suffered serious injuries to his right wrist and will have to undergo surgery to reattach the tendons.

However, despite his injuries, Mr Feaster is optimistic about his recovery and being able to return to his livelihood of spearfishing, hopefully by sometime next year.

Shark attacks are very rare and fatal encounters are even rarer. However, in certain situations, the risk of an attack is higher, especially when spearfishing. This incident was Feaster’s second physical encounter with a shark.

On Friday, Feaster and his fishing partner were spearfishing at the East End Point around 4.30pm when a shark attacked him. As he surfaced from the reef, he suddenly felt something grab hold of his wrist.

It was a reef shark about 10 to 12ft long, he recalled. “This shark came from nowhere – I didn’t see it coming,” he said.

“I felt something clasped onto my hand (wrist), and without thinking at all, I started to wrestle with this thing. I remember pulling my hand out of its mouth, and that is how I really got away from it and received all that damage; and why my hand is all torn the way it is because… I pulled it out of its mouth.”

According to Feaster, the struggle with the shark was short and lasted about three to five seconds. “It dashed away; it was about 10 to 12 ft long,” he said.

Feaster was able to get back into the boat with the help of his partner and they headed to McLean’s Town.

“I lost a lot of blood; it was a lot of blood in the boat. I don’t know how all that blood came out of me and I didn’t die,” he said.

A resident of McLean’s Town drove Mr Feaster into Pelican Point, where they met up with EMS personnel just past Pelican Point. He was rushed to the hospital and seen by doctors.

“The doctor said they have to reattach the tendons and that I will have to get some therapy and see how it goes. Nothing is for certain, but I am pretty optimistic about it,” he said.

“I am glad to be alive; the injury was in the wrist area, nothing happened to my arm, but it was pretty close to my vitals.”

Mr Feaster said spearfishing for conch, fish and lobster is his livelihood. He is hoping for the best with his recovery and believes that he’ll be out of work for at least two to three months.

“I have a son I have to take care of; the house is gone in the storm and I was just in the process of trying to build that back,” he said.

Mr Feaster will not let his encounters with sharks stop him from getting back in the water to spearfish, which he has been doing since age 16. “The second encounter was the worst of them,” he said, with a bit of humour.

He remembers his first shark encounter at age 17. “In less than a week of the first incident I was back in the water,” he added.

At that time, Feaster was spearfishing in 18ft of water. “I had just speared a fish and retrieved the rod, and as I had the rod in my hand this monster swept in and took the fish off the spear and with one single motion spin and came directly into my stomach and it propelled my backward really fast.

“I am taking it one day at a time and as soon as I could get back to work, I will be gone. You just have to do what you have to do.”

Mr Feaster said his priority is to rebuild his home in Sweetings Cay, where reconstruction has not yet started. He described the cay as a “campsite” settlement.

“If I go home, I will have to pitch a tent. Before the storm, I had spent eight years building my house there and I didn’t live in it for two years before the storm destroyed it,” he said.

Well, if it won't stop you from diving, I hope you are paying your own medical bills and not the state.

Huh????? Stop him from diving? Would you stop driving your car if you got in one accident?

Love your courage and resilience!