'Spread Of Covid In The Country Is Down’

Minister of Health attributes decreased testing to drop in cases 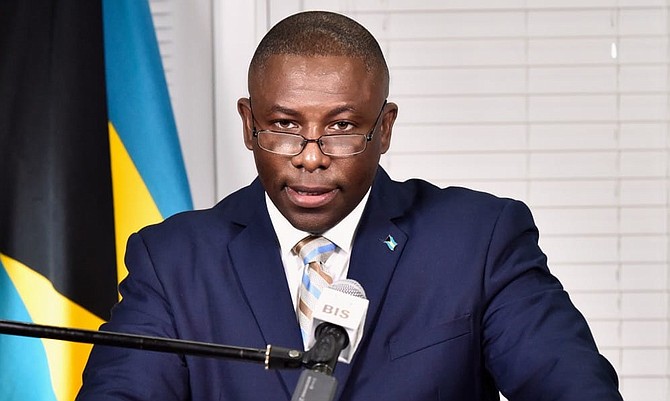 HEALTH Minister Renward Wells yesterday attributed decreased COVID-19 testing in the country to a reduction in cases, as he revealed the virus’ positivity rate is now 12 percent – the lowest it has been in months.

“The reality is the spread of COVID in (the) country is down. That is the absolute reality,” the minister said yesterday in response to a question from The Tribune on reduced testing.

Over the last week, testing declined by 29 percent.

According to information outlined in the Ministry of Health’s daily press releases, between October 20-26, 2,699 tests were administered, whereas from October 27 to November 2, there were 1,905 tests.

Speaking outside Cabinet yesterday, Mr Wells said while the country’s positivity rate had not reached 5 percent or below yet, The Bahamas was moving in that direction.

“The reality is the spread of COVID in (the) country is down,” he said outside of Cabinet. “That is the absolute reality. So, the way you test that is not by the amount of tests that is conducted, (but) you test the spread by what the positivity rate is in your country.

“So, for instance, if my positivity rate is 20 percent in The Bahamas and I test the 10 of you that are here I would expect that at least two of you here would be positive.

“So, it’s safe to say that the rate of transmission of COVID-19 in The Bahamas is down.”

“We went from 32 down to 12 and so we’re going to be looking to continue our efforts in the Ministry of Health to see if that rate continues to decline, but that’s depended on all of us because the virus just doesn’t spontaneously appear in someone.

“If I have it, I have to transmit it to you. So, adhering to the health protocols is what is stopping the transmission of this virus in the public space and in the public sphere. Obviously, we could see that the fact that we instituted the weekend curfews and we reduced the weekday curfews is having a very positive affect on the rate of transmission and also the Bahamian people have been exercising some discipline.”

However, he was coy in his response when asked if this meant the second wave of COVID-19 was coming to an end.

“I wouldn’t say that and keep my fingers crossed, but I would say that the work that we’ve been doing inside the Ministry of Health, the actions of the government and the competent authority has had a dramatic affect on the rate of transmission of COVID in the country.”

Asked if there would be further relaxation of restrictions, Mr Wells said this was directly tied to case numbers.

“As you could see the tightening and loosening of restrictions mirrors the increase and the reduction of cases, so as cases go down as you would remember in the first wave the government (relaxed) some of its tightening measures. The point where we got around the first of July, we were able to open the country,” the minister said.

He said the ministry was also working on a logistics plan for the COVID-19 vaccine when one becomes available.

“We are also in the Ministry of Health in regards to COVID putting together a logistics plan so that whenever the vaccine is announced for COVID-19 that we would be able to get it to every Bahamian who wants it in the shortest possible time.

“So we in the Ministry of Health are putting that logistics apparatus together and obviously we already have an apparatus together in regards to flu so we’re just going to augment it to enhance it so that we’re able to touch everyone in the country who would want the COVID vaccine.

“Again I want to state to the Bahamian people (that) no one is going to be forced to take a COVID vaccine, no one.

This comes as the country recorded 31 additional COVID-19 cases on Monday and one additional death. A 48-year-old New Providence woman died on November 2.

As of Monday, 36,409 tests have been completed. One hundred and forty tests were done on Monday.

Of course the number of cases is down. They're down because he has personally ordered a significant decrease in testing as requested by Minnis and D'Aguilar. What a joke!

Not how it works..testing is down because less people present with symptoms...they don t just go around jamming swans up people nose in the hope of finding cases. However in the states where you have over sensitive pcr tests and u need a test to go work or travel. Thats a way to find a bunch of Asympyomatic cases that aren’t infectious!and drum up a bunch of panic...

Did you also forget that majority of bahamians can't even afford to be tested, we need free testing...NO EXCUSES!!!

This is so incompetent. They should be doing enough tests that they are getting less than 5% positive. That means they are catching the majority of infections. Why is there any push back against testing. This is craziness.

$200-400 for is test is expensive for one but Why put up the cash for something has that has about 99.99% of not killing you. And if you don't have symptoms you have less than 2% chance of transmitting it to others. In the mean time add to that if you test positive you might loose two weeks of work as might your family members or anybody you have been in contact with (if you're lucky enough to have a job). Why on earth would people participate in something like this given the potential costs. Of course there is push back in testing...it's just not worth it, if you test positive given this is a low risk disease.

You must get all of your news from Facebook.

Country is seeing the end of another wave. If it is the third wave it will hopefully be the last and the virus will start to disappear. But the US is seeing surges that are breaking all their previous numbers. Are they reaching their peak of another wave?

And gosh isn't incredible that it went away just at infections x10 or 20-30% of populations as forecasted irrespective of Lockdown or effective mask use.

There no uptick in deaths in the USA it as done nothing but decrease with but with a tiny in July... Cases are useless to talk about.