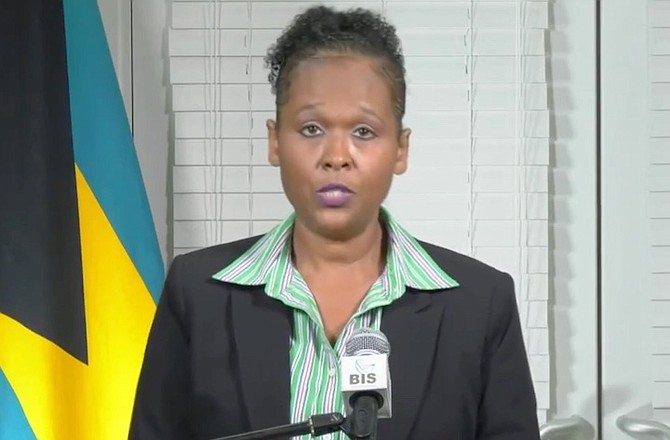 CHIEF Medical Officer Dr Pearl McMillan said she expects tourism officials to eventually use the rapid antigen test in the way required by the country’s health protocol – that is, only on symptomatic people.

During a press conference on Friday, Dr McMillan was asked how secure should residents feel about results of the antigen test that travellers are required to take five days after arriving in the country since the test is not believed to be useful in diagnosing asymptomatic COVID-19 carriers.

“The protocol does speak to utilising the test in symptomatic persons,” she said. “In our collaboration with tourism, we would’ve shared our protocol so we anticipate that the protocol will be utilised as per the recommendations in the national protocol. Once it is utilised in that way, then we can feel very secure in what the results are.

“The reason we have protocols that are based on international guidelines is to provide security so long and short, the protocol that we would’ve agreed upon in the national EOC speaks to use of the antigen test in certain circumstances and we anticipate that tourism, as we move forward, will be actually using it in that way.”

Currently, all travellers – whether they are symptomatic or not – are required to take the rapid antigen test five days after arriving in the country. Some health officials now fear that this practice will create a false sense of security about the COVID-19 status of travellers.

During his speech on Friday, Health Minister Renward Wells discussed the Ministry of Health’s protocol and use of the antigen test.

He said: “Although the RT PCR test remains the gold standard in-country to diagnose COVID-19, selected rapid antigen tests are now being incorporated in our protocol to detect an acute infection of COVID-19 in patients who are experiencing symptoms. Despite being less sensitive than the RT-PCR test, rapid antigen testing is relatively inexpensive and provides rapid results.

“This type of testing has the potential to provide wider access to COVID-19 testing at an acceptable turnaround time when there is limited access to RT-PCR.”

He added that the World Health Organisation has granted authorisation to two antigen tests for emergency use: the SD Biosensor and the Abbot PanBIO rapid antigen tests.

“The only drawback of the test,” he said, “is that there are currently no published studies of rapid antigen test performance in asymptomatic populations.”

Health officials are trying to boost their capacity to police the use of the antigen tests, with Dr McMillan acknowledging that officials have received reports about unauthorised use of the tests in Eleuthera.

“The team that was on the ground in Eleuthera (last week) brought some concerns to our attention and we are actively seeking to investigate what is happening on that island,” she said in response to a question from The Tribune.

“As it relates to the protocol, we would have had capable and competent lab personnel actually work on putting together that protocol and that has been approved at the national level by the EOC and certainly that is something we would be in a position to provide (more widely) and as we move forward with the validation and verification and quality assurance measures that were mentioned earlier, all of those pieces will come together for us to be able to ensure that these unconfirmed instances diminish and actually ideally not occur.”

“The test should be administered by trained healthcare providers, undergo local validation before use, be performed with continuous quality assurance and applicable biosafety precautions and be performed by a facility that has been certified by the Health Care Facilities Board,” he said.

Mr Wells also revealed on Friday that the National COVID-19 Ethics Committee has approved the SalivaDirect test for evaluation in a pilot programme in New Providence and some Family Islands.

The study, which he said will target asymptomatic carriers, will see consenting participants swabbed as normal while a saliva sample is simultaneously obtained from them.

“This way we can compare the results and measure the accuracy of the saliva-based method against the swab method,” he said. “This pilot is anticipated to proceed during November. The National Reference Laboratory will present its findings and recommendations as it relates to the performance of and potential future use of the SalivaDirect Test.”

Which means the asymptomatic carrier can continue their spread of the virus with reckless disregard. What a smart crew leading this effort!

If outcomes depended purely on leadership we would all be dead!

Asympyomatic transmission is rare. More concerning (Not really concerning because this is a mild desease) is that most symptoms - fever, headaches are easy mask with over the counter medication. So ultimately you just have rely on honesty. And at that point what’s the point.

... this article amongst others suggest otherwise!

I don t see anything that suggests otherwise in your article? It’s ‘they may’ I am citing The Who who just note that is rare/unquantifiable.

Did The Who changed their stance?

Jury so far is out most studies there seems to be a weak correlation between asymptomatic infection and transmission.

I don t see anything that suggests otherwise in your article? It’s ‘they may’ I am citing The Who who just note that is rare/unquantifiable.

Did The Who changed their stance?

Jury so far is out...there seems to be a weak correlation between asymptomatic infection and transmission.

... this is an excerpt from that article

"Xi et al modeled the infectiousness of SARS-CoV-2 and estimated that 44% (CI, 25%-69%) of secondary cases were infected by a person in the presymptomatic stage of infection."

Sorry this article is bogus (never mind that is just a blog on at hospital webpage) but cites three studies 1) isn't a study it's outdated cnn article on a study from April. 2) is study about kids are asymptomatic with high viral loads but doesn't say they actually do (it says "the have the capacity to"). 3) Finally the third isn't about asymptomatic people it's about pre-symptomatic persons.

Again I'll say it again very little evidence supporting wide spread asymptomatic spread. The closest thing to case studies are schools and there is very mixed results. What is clear is that younger kids tend to be more oftenly asymptomatic and more less likely to spread to the infection. COVID is spread by droplets (and airborne particles) produced in coughs or sneezes (both symptoms of the disease) persons not sneezing/coughing when infected would likely spread the disease less..though can spread it would airborne particles (much lower viral load) in vocal cords.

McMillan is in dire need of some serious medication - her face says it all !

As for Wells, a medication hasn't yet been developed that can help him with his many mental issues. Besides, most head medications usually require that a brain exist.

this article reminds me of "shut mouth catch no fly". If, as has been stated in the recent past, the Bahamas follows protocols and recommendations from WHO and PAHO they why, pray tell, do we need conduct a validity study here in the Bahamas of the Antigen test on asymptomatic people? Is this new study of antigen test validity on asymptomatic carriers new ground breaking research? Is this Ministry of Health of the Bahamas implying that any research already conducted is invalid? or are they saying that this research has never been conducted before? It all seems a bit disingenuous. at the very least, with the country's purse upside down, is this wise use of funds?