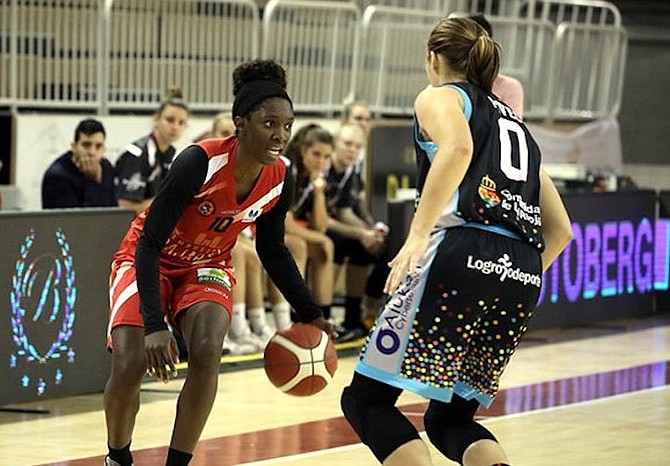 BAHAMIAN guard Lashann Higgs turned in another outstanding performance, scoring 13 points, but it wasn’t quite enough to lead her Embutidos Pajariel Bembibre PDM women’s professional basketball team to victory in the Spanish League yesterday. They suffered an 80-63 loss to the Campus Premete.

Bahamian guard Lashann Higgs turned in another outstanding performance, but it wasn’t quite enough to lead her Embutidos Pajariel Bembibre PDM women’s professional basketball team to victory in the Spanish League yesterday.

In a home game at the Bembibre Arena in Bembibre in the city of El Bierzo in Leon, Spain, Higgs poured in 13 points as they suffered an 80-63 loss to the Campus Premete. It was Embutidos Pajariel Bembibre PDM’s seventh straight loss for the season, dropping their win-loss record to 1-9.

“I felt as if we had a pretty good start to the game, but as the game went on, we lost focus a little bit,” Higgs told The Tribune. “We are making strides, but there are still areas that can be improved and it’s something that we will continue to work on.”

As for her performance, she noted: “My progress is coming along, but there is always room for improvement each and every game.”

Embutidos Pajariel Bembibre PDM will be back in action on November 19 when they take on Alter Enersun Al-Qazeres in the last of three more games this month.

They have five games to play up to December 27 before they break for Christmas.

Their first game for the new year will be played on January 3. The regular season will wrap up on February 27.

“I would say consistency in the level of focus we have throughout the game,” she noted. “Maintaining focus for the entire game (is going to be our main priority).”

Higgs, 24, is a native of Harbour Island, Eleuthera. She moved to Texas in 2913 after her mother Romilly Higgs passed away. She joined the Frank Rutherford Development Programme.

While attending Cedar High School, she was placed in the care of her adopted parents George and Jackie Washington. George is an assistant coach for Texas women’s basketball and was a standout guard at Abilene Christian, the same school that Jackie starred before she was inducted into the ACU Sports Hall of Fame in 2012.

Higgs, at 5-feet, 9-inches, performed exceptionally well for the University of Texas up until her junior year when she suffered a near career-ending injury. She returned for a stellar red shirt senior season last year. But after she didn’t get drafted in the Women’s National Basketball Association, she ended up taking her talents to the Spanish League.

Like everywhere around the world, Higgs is not exempt from the protocols surrounding the coronavirus pandemic, which has certainly affected the way that sports is being operated without any fans in the stands.

“We get tested every week and we are on lockdown again, so I think it’s being handled well,” Higgs said. “It’s okay (not playing in front of the fans), not too bad.”

In the meantime, Higgs, who trys to limit her movement outside of her residence and the game facilities in the COVID-19 environment, said her main goal is to take care of her business on the court for Embutidos Pajariel Bembibre PDM.

“I just want to continue to improve physically and mentally, both individually and collectively,” she summed up.