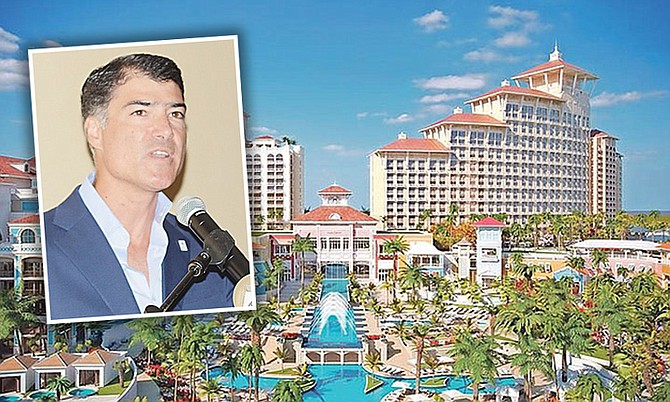 * Failure to disclose to court 'unacceptable'

* No sanctions for contractor/Pointe owner

A Supreme Court judge has blasted Baha Mar's contractor for "unacceptable" conduct in failing to disclose it obtained Sarkis Izmirlian's disputed legal papers one day before a court hearing on the matter.

Justice Ian Winder, in a November 3, 2020, verdict, disclosed that he was "troubled" by China Construction America's (CCA) failure to inform himself - and its own Bahamian attorneys - of that development prior to hearing arguments on whether the Supreme Court should "unseal" the documents in question.

But, despite administering what is effectively a slap on the wrist to CCA, Justice Winder elected to enforce no sanctions against the Chinese state-owned contractor which is currently in the final stages of completing construction on downtown Nassau's $200m development, The Pointe.

Instead, he refused to make any of the declarations sought by either CCA or Mr Izmirlian's Baha Mar Properties (BMP) vehicle, and instead handed the matter over to the New York State Supreme Court to decide whether the former Baha Mar developer has any "privileged" ownership interest in the disputed documents and if this has been breached.

Mr Izmirlian and his former contractor have been locked in a near three-year legal battle before that court over the former's $2.25bn fraud and breach of contract claim, which relates to events that plunged the now-$4.2bn Baha Mar project into Chapter 11 bankruptcy protection and ultimately saw it sold to present owner, Chow Tai Fook Enterprises (CTFE).

Justice Winder's ruling stems from the fight temporarily returning to The Bahamas after a hearing before the New York State Supreme Court earlier this year resulted in all parties agreeing to inform the Supreme Court about the disclosure of the documents.

The papers in question are legal opinions prepared by two foreign law firms, Kobre & Kim (UK) and Glaser Weil LLP, for Mr Izmirlian in 2015 when he was still Baha Mar's principal developer. They provided estimates of the value of Baha Mar's legal claims against CCA.

The documents were among the few relating to Baha Mar's receivership, and ultimate sale to CTFE, that Justice Winder had ordered should remain under seal and not available for inspection by the general public.

And he subsequently rejected CCA's bid last year to unseal them in a bid to boost its position in the New York court action. However, unbeknown to Justice Winder and the Supreme Court, the Chinese state-owned contractor had obtained the documents via a backdoor channel just one day before he heard arguments on whether they should be unsealed.

"It has now transpired that on March 25, 2019, Norbert Chan handed over the opinions, along with certain valuation reports, which are derivative of the opinions, to an employee of CCA," Justice Winder noted.

"This handing over occurred on the day before my hearing of the application to unseal the opinions. At the time of the delivery of my decision I was not informed of the exchange of the opinions between Chan and CCA."

Justice Winder described Mr Chan as "a senior accountant at Deloitte Hong Kong, and at one time the field partner in charge of the sale" of Baha Mar's real estate assets to the various vehicles created by China Export-Import Bank, the project's secured lender, to facilitate the final deal with CTFE.

Mr Chan was a director for two of these vehicles, Perfect Luck Assets and Perfect Luck Investments. Darach Haughey, who along with Raymond Winder, then-Deloitte & Touche (Bahamas) managing partner, was one of Baha Mar's three receiver/managers, testified that Mr Chan would have had access to the opinions as part of the negotiations for the project's eventual sale.

However, Mr Chan provided no direct testimony, and Justice Winder said the circumstances surrounding his handing the documents to CCA - and reasons for doing so - was "unexplained". And the Chinese contractor itself was equally quiet and "has not sought to provide any details as to how it came to receive these documents from Chan".

The handover was finally disclosed to the New York State Supreme Court earlier this year, leaving the US judge "understandably alarmed by representations that the joint receiver/managers had provided the opinions and the valuations to CCA in the face of my May 1, 2019, ruling, indicating that the opinions had not been disclosed to anyone.

"Concerned that the Bahamian court had been misled, at the March 26, 2019, hearing, the learned judge sought to ensure that the disclosure be brought to the attention of this court. I readily admit that I, too, was initially troubled by the revelations in the New York action concerning the disclosure," Justice Winder ruled.

However, he found that the New York court had "proceeded on a misapprehension of the evidence" as Mr Chan was not working on behalf of the Deloitte & Touche receivers who had also been kept unawares about the documents' handover.

Mr Izmirlian and his BMP vehicle are seeking to prevent CCA from using the legal opinions in its defence to his New York action on the basis that they hold "legal privilege" over the documents, which also remain sealed by the Supreme Court and thus should not be disclosed. CCA is contesting these positions.

The former Baha Mar developer had sought declarations from Justice Winder that Mr Chan was acting as an agent for the Deloitte receiver/managers when he passed the legal opinions to CCA; that disclosure was "not in the interests and for the purpose of the receivership"; and that legal privilege could not be waived by Mr Chan.

CCA, for its part, sought a declaration that it had not breached the Supreme Court's order, and that any privilege interest over them had been "waived". Justice Winder, in declining to grant either side anything, said the documents had originally been sealed to prevent sensitive commercial data from entering the public domain and compromising the Baha Mar sales process.

"A sealing order is just what it says - a sealing of the court's file - and is not necessarily relevant at all to whether CCA is entitled to possess or to use the opinions that they have apparently now obtained," he wrote.

"The evidence seems clear that the material was not obtained from accessing the court's file at all but from Chan, who had access to the opinions through his directorship (past or present) with" the Perfect Luck vehicle.

However, while reserving his criticism of CCA for last, Justice Winder declined to take any action and instead handed the issue back to the New York State Supreme Court to decide on the basis he "ought not to complicate matters by making findings in this receivership action" when the matter was already before that court for determination.

"Whilst their Bahamian lawyers who appeared before me at the hearing on March 26, 2019, were unaware that the information had been disclosed it is unacceptable that CCA said nothing to the court about its already having acquired the opinions which were the subject of the application.

"That information was not provided to me, either at the hearing on March 26, 2019, or prior to my delivery of the ruling on May 1, 2019. Had I not found that CCA lacked proper standing, this conduct would have been an additional matter which would have impeded any decision to exercise my discretion to grant declaratory relief in its favour."

He gave this country Bahamar and he lives Lyford Cay. Sol Kerzner brought Atlantis here and he lived Ocean Club. The woman who is oh so important to us (more important than our kids - we use her to justify messing them up) is made to starve and live like a pauper. Prejudiced, misogynistic, racist, elitist, 2-faced bigots.

But, despite administering what is effectively a slap on the wrist to CCA, Justice Winder elected to enforce no sanctions against the Chinese state-owned contractor which is currently in the final stages of completing construction on downtown Nassau's $200m development, The Pointe.

The one sentence quoted immediately above sums up the full extent to which our government and judicial system have been so seriously compromised by the Chinese Communist Party.

The sinister and evil Xi Jingpin led communist regime are indeed the puppet master pulling all of the key puppet strings in our country today. "Bag Man" Baltron Bethel, Vomit Christie and that Evil Wicked Witch of The West, Maynard-Gibson, must all be laughing out loud to themselves as they watch the FNM leadership compromise itself in much the same way the last PLP administration did. What a joke!

I am no fan of the Chinese, but if Izmirlian was the current owner of Bahamar, he would have bankrupted it for a third time. Only strong hands like the Chinese can afford to lose millions of dollars per day for an extended period of time.

But don't think for a moment the Chinese Communist Party is throwing away their money by maintaining full control of Baha Mar. What they're actually doing is buying our country with the help of our corrupt ruling political elite. Open your eyes wide my friend, before it's much too late.

Keep fighting Izmirlian for what was rightfully yours.

I doubt very much that he wants to be the owner of a resort that is losing over a million dollar a day. He is probably very satisfied the way things have turned out.

This man was robbed of hundreds of millions by the corrupt Chinese government and the corrupt PLP government. What a shame on our country! I guess that's what happens when you do business with Communists and Cronies.