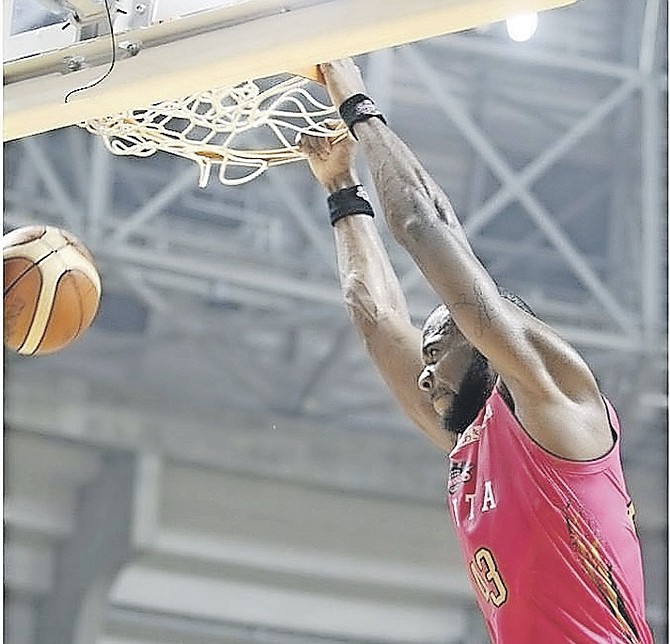 Birthday boy Kadeem Coleby helped the Akita Northern Happinets pick up their second straight victory in two nights over his celebrated weekend against the same team in the Japanese D1 professional basketball league.

On his 31st birthday on Sunday, Coleby led four players in double figures with 15 points and 13 rebounds as the Akita NH, coached by Kenzo Maedo, pulled off a slim 73-72 decision over the Osaka E.

In playing a total of 35 minutes, Coleby shot 6-for-11 from the field or 54.5 percent and 3-for-6 (50 percent) from the free throw line. Ten of his rebounds came from the defensive end. He also had three assists, three blocked shots and a steal.

On Saturday night in the first of their double header in Akita, Coleby and Akita NH prevailed with an 80-72 rout over Osaka E as Coleby came up with 11 points and nine rebounds.

Coleby, in 31 minutes, shot 5-for-7 from the field and 1-for-4 from the foul line. He had six of his rebounds on the defensive end. He also had two rebounds and a steal.

With the two victories, Akita NH improved their win-loss record to 8-4 for fifth place in the East standings in the two-tier league.

Since the season began on October 3, they went on a 4-game winning streak before losing three straight. After winning another two games, they went on two consecutive losses.

Coleby and the Happinets close out the month of November with three games. They will play another home game against the front-running Tochigi B (11-1) on Wednesday night before they head on the road to take on Chiba on Saturday and Sunday.

Coleby and Akita NH will gear up for a showdown on December 2 when they take on Niigata Albirex, featuring fellow Bahamian Mark St Fort, if they are both released to play for the Bahamas men’s national team in Puerto Rico for the FIBA AmeriCup 2022 Qualifiers from November 27-December 1.

There are a total of 10 games on the schedule for Coleby and Akita NH through December 27. They will return on January 2 to start the new year and the road to the end of the regular season on May 2. The 6-foot, 9-inch, 250-pound power forward/centre is a 2012 graduate of Wichita State University where he has earned a bachelor’s degree in general studies-sociology and a major in ethnic studies.

He is the son of Dwight Coleby and Annabell Mass and has a brother, Dwight Coleby, who also played pro basketball. The two brothers have also represented the Bahamas on the men’s national basketball team.

St Fort and Niigata Albirex were also in action over the weekend, losing both of their games to Tochigi B as they dropped to eighth place in the East division with a 4-9 win-loss record.

In game two on Sunday, they dropped a 85-67 decision as St Fort played 31 minutes and came through with 24 points, five rebounds, five assists, two blocks and one steal. He shot 9-for-12 from the field and was 6-for-7 from the foul line.

On Wednesday, St Fort and Niigata Albirex will be back in action when they take on Alvark T. They close out the month with two games on the weekend against Hokkaido K on Saturday and Sunday.

St Fort and Niigata Albirex won’t play again until December 2 when they face Coleby and Akita NH, depending on their participation in Puerto Rico for the FIBA AmeriCup 2022 Qualifiers from November 27-December 1 with the men’s national basketball team.

Just like Coleby and Akita NH, St Fort and Niigata Albirex will have nine more games up to December 27 to end the year. They start the new year on January 2 with the regular season completed on May 2.

Thank you for this important update on an eighth-place team in Japanese D-league basketball. We are breathless with delight and look forward to any updates on Moldovan D-league mudscuffle as well.