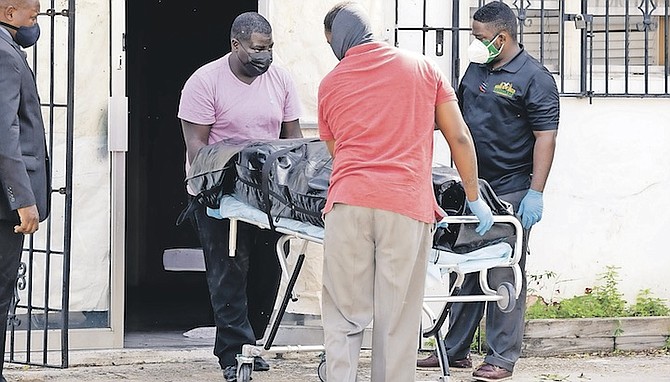 A BODY is removed from a building on Mackey Street yesterday. It is understood the deceased man was Geoffrey Martin. Photo: Donovan McIntosh

A PARTIALLY decomposed body was found on a bed inside a building on Mackey Street yesterday.

At the scene, police press liaison ASP Audley Peters explained evidence did not suggest foul play at the time. The body appeared to have been inside Martin’s Moving, Storage and Customs Brokerage Ltd for some time.

ASP Peters said: “Around 9.20am, police received reports of an odour emanating from a building situated on Mackey Street. Officers responded and on their arrival with the assistance of a key holder they gained entry.

“While in the building officers discovered the body of a male partially decomposed lying on the bed. At present, the evidence does not suggest foul play. However, we’re waiting on an autopsy report to determine the cause of death.”

While police did not release the deceased’s identity, Matthew Mitchell, a childhood friend, told The Tribune he is 58-year-old Geoffrey Martin. Mr Mitchell was distraught,

Mr Mitchell said that the brokerage firm was a family business, adding that Mr Martin was an integral part of its customs brokerage, moving and trucking operations.

Mr Martin was there on a daily basis and it’s where he lived, he said. At the scene, Mr Mitchell described the father-of-two as “stoic”.

“I came down to get something done and noticed that after I shouted out a couple of times he didn’t respond. So I went to the window after seeing loads of flies and I looked inside and there he was.

“Very sad to have found him in the way that I did. That’s something that will probably never ever leave me.”

The two men had been friends since they were five years old.

A “super guy, athletic, friendly, warm,” who “gives his last to those he loved and cared for” was how he remembered his friend.

“It’s really very difficult to accept that it’s reality. You know you never expect these kinda eventualities to come to your friends, but life takes a different twist and turns.”