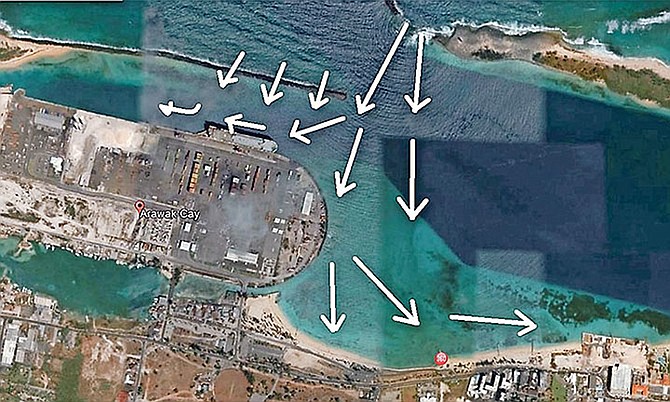 * APD alarm reveals nothing done since issue flagged in 2017

Repairs to Nassau Harbour's "severely damaged" breakwaters are a national "imperative" that cannot be delayed due to the "significant threat" posed to tourism, cruise and commercial shipping.

Arawak Port Development Company (APD), in a stark warning contained in its just-released 2020 annual report, said existing breaches in both breakwaters - one up to 350 feet long - were already impacting its ability to service vessels at the Nassau Container Port as well as the piloting of cruise ships pre-COVID-19.

Targeting a problem that was first flagged three years ago, but about which seemingly nothing has been done, APD said it had formed an alliance with the Nassau Harbour Pilots Association (NHPA) in a bid to source financing and construction services to address the breaches prior to a Hurricane Dorian-style storm hitting Nassau.

The BISX-listed commercial port operator said it had hired two US-based companies to provide proposals for repairing the breakwaters, which guard the entrances to both Nassau Harbour and Arawak Cay, and had received a three-phase road map setting out how this could be achieved.

Dion Bethell, APD's president and chief financial officer, was in a Board meeting when contacted by Tribune Business yesterday and unable to comment on how far the proposals had progressed in winning government support and approval.

However, the company's annual report made clear the extent of the threat it believes is posed to Nassau's tourism product and import trade, with 90 percent of physical goods brought into New Providence coming across the Arawak Cay port.

"The COVID-19 pandemic has also brought forcefully home the potential negative impacts from the interconnections among maritime networks, natural disasters and international politics, and how they can impact port efficiency and profitability," APD said. "Going forward, we must concentrate on building sustainability and resilience.

"In the case of the Bahamas maritime industry, this includes paying urgent attention to repairing of the eastern and western breakwaters at the entrance to Nassau Harbour and Arawak Cay. It must be emphasised at the outset that these severely damaged structures pose a significant threat to our tourism product and negatively impact the flow of commercial and cruise shipping coming into the country’s capital. Given what seems an inevitable progression of mega hurricanes impacting our islands, it is imperative to address the problem."

Recalling the breakwaters' history, APD said they were constructed in the 1960s by the US Army Corps of Engineers Waterways Experiment Station in an effort that was sponsored by the then-Ministry of Maritime Affairs, as part of a bid to "stabilise" Nassau Harbour's entrance.

The west breakwater, around 3,100 feet long, extends from Silver Cay to the harbour entrance channel while its eastern counterpart is located at the west end of Paradise Island and was around 800 feet long when first built.

"A serious breach occurred in the eastern breakwater, likely created during the 1991 Halloween Storm (also called the ‘No Name’ storm), which originated off the eastern coast of Canada, generating high waves that wreaked havoc along the North American eastern seaboard and affected Bermuda, The Bahamas, the Dominican Republic and Puerto Rico," APD added.

"Several times throughout the year the breakwaters do not provide adequate protection in the channel and turning basin; this interrupts operations at Nassau Container Port and our ability to service vessels," the annual report continued.

"To a great extent, it impacts the harbour pilots’ ability to service incoming cruise ships. We note further that wave penetration into the inadequately-protected harbour has resulted in erosion to Junkanoo Beach and adjacent beaches at Long Wharf, and is believed likely to have an impact on the quality of The Pointe property, marina and beach."

APD's annual report indicates nothing has changed since the late 2017 release of a report by the Inter-American Development Bank (IDB), which warned that "heavily degraded” infrastructure in Nassau harbour is “threatening the Bahamian economy’s viability” by damaging cruise and commercial vessel access.

An economic analysis, accompanying a $35 million IDB-financed project to upgrade the Bahamas’ coastal management and infrastructure, warned then that the harbour’s deteriorating breakwaters are affecting the flow of ships to both Prince George Wharf and Arawak Cay.

It revealed that Ministry of Works personnel had described the breakwaters’ repair as “a top project priority”, given the potential impact to the Bahamas’ main cruise passenger gateway and the sole entry point to New Providence for commercial goods in the shape of the Arawak Cay port.

All this, though, has seemingly yet to translate into action. APD said "mutual concern" over the situation had resulted in its partnership with the harbour pilots' association in an effort to drive repairs, and find the right contractor and financing option.

"APD engaged two firms widely recognised and respected in marine and industrial construction - Orion Marine Construction and Bermello Ajamil & Partners - to provide proposals for the design of repairs to the breakwater structures located at the Nassau Harbour entrance and adjacent to Arawak Cay.

"The APD/Pilots Association Partnership has now received proposals providing valuable information to support further action from both companies. The bona fides of Orion and Bermello Ajamil & Partners (BA) can be reviewed at their websites."

The proposals call for a three-phase approach to effecting the repairs. No figure has been provided for how much this will cost, although it is likely to run into the millions of dollars. The Caribbean Development Bank (CDB) previously suggested the total could amount to $20m.

Get the cruise ship companies like Carnival, Royal-Caribbean and Norwegian to arrange and pay for the fix. It was afterall the force of the huge water displacements attributable to their gigantic floating hotels moving in and out of the harbour that caused the weakening and eventual breach of the breakwater barrier. Fair is fair. Bahamian taxpayers should not be saddled with this cost when these cruise ship companies have contributed so little to our economy in relation to the environmental damage and pollution they cause and the enormous profits they have enjoyed from the use of our country.

And why does the IDB continue to put its lending teats (tits) to the sucking lips of our corrupt politicians?!

tribanon, you must be extremely young and lacking in the art of research. You would not remember the size of cruise ships between the time of construction of the breakwater and the time of the breach. We did not have the mega ships at that time - and it was a weather condition that tumbled the breakwater. Admittedly things are very different now, I would like for us to do like Key West and ban the mega ships and put in place a size limit to the ships in port with the demitting of passengers to be held at a reasonably controlled level. We need quality visitors - not quantity.

The breaker barrier was weakened by the incredible forces from the huge amounts of displaced water by passing cruise ships over many years. The breached part of the barrier just happened to be the weakest point at the time of the storm due to the boulders having shifted earlier from their original positions. And I can only wish I were as young as you think I am.

If Key West saw the wisdom in kicking our large cruise ships we should too!

And what you gonna do if the cruise companies decide to bypass us? It's not like there is a lack of islands for cruise ships to visit.

Are you kidding?! What we really need are stop-over tourists who arrive by air, stay at our hotels and resorts and quite often shop and dine at non-hotel operated business establishments around our country. They each spend on average 20 times what the sea arrival visitor spends. And in case you haven't noticed, the very greedy and unscrupulous cruise ship companies have been allowed by our corrupt politicians to move to the all-inclusive model on land for their passengers. We get stuck with the costs of their smoke stack pollution and irreparable damage to our seabeds, not to mention the shiit and contaminants they dump into our seas.

Totally true. Quicker we kick them out the better. Should have happened years ago.

For short trips they need to stop abroad to avoid US regulation. And they largely can not go to Cuba and they can't go to the Turks as their waters are too shallow. So people will have to just visit us by air and stay in hotels which is much much better for us. In the long run if all islands kick them out following Key West we can be rid of them completely, this is what island wide groups like CARICOM are supposed to be able to co-ordinate.

Yes, I'm saying the cruiseship traffic over many years prior to the storm was indeed the root cause of the breach. The storm was merely the straw that finally broke the camel's already weakened back at its weakest point.

This damage was done in the early nineties by the record storm surge that brought water up on Bay Street and destroyed homes along West Bay Street. It has sat there in that dilapidated state, as one of the first sights visitors see upon arrival into the harbour, for four terms of FNM and two of PLP governments. Discgraceful! One would have thought that this repair would have coincided with the Arawak Port Development project or the ongoing Port and Bay Street Development projects. Arawak Port is making millions on ships entering the Harbour and should be made to contribute. As for government's failure to do anything for almost thirty years? What else is new?

But it was not the root cause of the breach. It was merely the straw that finally broke the camel's already weakened back.

I blame this on the pirates from back in Woodes Rogers days. They should have built a good a proper breakwater from that time. Now we are saddled with this expense. Surely there are some descendants of those pirates?

Let's do a genealogy search and find out who they are, and tax them in particular. My belief on the matter is that they owe us reparations for the failure of their ancestors to foresee and protect our tourism industry. They were boaters and should have known better.

Let's start a campaign to get this done. #taxthepiratekids

Bravo! Yes, a thorough genealogical search must be conducted, to identify and locate all descendants of Blackbeard the Pirate, Bluebeard, Fred Beard, and Popeye the Sailor Man.

Tax them, assess, them, fine them and then keelhaul them until they cough up every last tuppence and florin to fund the new wall.

Thanks for the great chuckle. As a regular visitor to Nassau, I well recall when the breakwaters and Arawak Cay were constructed. For all we know, Jimmy Hoffa's buried beneath!

Don't worry...many of us who now have a much clearer picture of what's been going on since 1973 are working full-time on expelling the new breed of pirates who think they can continue to prey on us with impunity. LOL

Not a single point herein below is made-up stuff!
Why are some still not grasping as to why in wake of all the COVID financial pressures with now done more than 600 in the hospital's morgue, why PopoulacesOrdinary at large POAL goin' sees it as an an insult to reason and logic each time another for-profit player be's positioning be jumpin' to the front line likes empty pockets beggars lookin' financial handouts?
Shakehead once for Yeah could've thought Papa Hupert's redcoats' regime had done filled their pockets more than sufficiently, Twice for Not so when the Port Authority on another out island still operating under the 1950's Hawksbill Creek Agreement sought out for Colony's PopoulacesPurse to repair their corporate-owned airport's damages caused by HurricaneDorian?