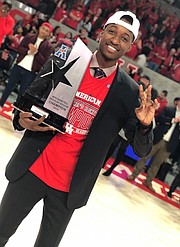 AFTER suffering an injury, Bahamian basketball player Mikhail McLean thought his career was over. But as he recuperated on the sidelines, he got involved as a graduate assistant at the University of Houston.

Now McLean has been elevated to the position of assistant director of player development, assisting with court player development, mentorship of the student athletes, advanced scouting for opponents, alumni outreach programme, film breakdown and highlight reels.

“It’s huge for me because it is a step in the right direction for our country,” said McLean on the impact of his position as a Bahamian. “The more representation we have in the US as players and coaches motivates kids from our country that anything is possible.

“It is now my duty as I continue this career to help other young men/women to get the opportunity I received to pursue basketball and receive a free education.”

McLean, 29, remembers how Bahamian Olympian Frank Rutherford opened the door for him when he introduced him to his Elite Training Programme in Houston, Texas. He came to watch him play in 2005 and then invited him and his family to visit schools in Houston.

“Wouldn’t be where I am today without the help of Frank Rutherford, who’s been a mentor to me since the day I stepped foot in the US,” McLean pointed out. “Frank was on me everyday to be the best that I can be.

“It was never about how far I can make it playing basketball, but instead about getting a free college education and have a chance to impact generations behind me to do great things.”

McLean, a product of Chippingham, born to the parentage of Leroy and Olivia McLean, attended St John’s College until 2006 where he excelled in every sport, except basketball.

“Two months before I moved to Houston my track coach (David Charlton) of the Star Trackers told me I had to make a decision between track and basketball,” McLean said. “It was a really tough decision because at the time I was training for the 400 metre hurdles with Karlton Rolle, who went on to UCLA for track.”

McLean decided to stick with basketball as he realised that he had more potential to go further than he would in track after he helped the Giants win the junior boys’ titles in 2004 and 2005 respectively.

In hindsight, McLean said he has no regrets about his decision.

“I’ve gotten opportunities to travel the world because of basketball and sit in the rooms with people I have no business being with,” he said.

“I’m far from finished with the potential of what basketball has brought to me as a player and now a coach.”

During his senior year at UH as he was sitting his first year of his master’s degree, McLean broke his foot for the second time on February 1, 2015 after a win against defending national champions University of Connecticut Huskies.

Over the next month he went through his rehabilitation.

“While on the sidelines the next month and-a-half I slowly became interested in the game as a coach. I was offered a graduate assistant job the following year and once I completed my master’s I was hired full time in my current position.

Today, looking back at his journey, McLean said it’s been a tremendous adjustment transitioning from a player to a coach.

“I literally went from being a team captain that went to war with my teammates and had fun together off the court, to being a coach that had to make them run if they missed class or didn’t turn in a homework assignment,” he said.

“It was very tough, but my former teammates made the adjustment easy for me, and they really trusted me so I was able to bridge the gap between the staff and the team.”

Although there is a lot of uncertainty about the direction that college sports will take going into the new year because of the coronavirus pandemic, McLean is looking forward to the season with great anticipation.

“Our team was robbed of an opportunity to make a deep run in the NCAA tournament last season due to the pandemic,” said McLean of sports that came to a halt in March because of the virus. “We returned all but two of our starters and have a team that has a chance, if healthy, to make it all the way to the national championship.”

In the meantime, McLean said their coaching staff is doing all they can to ensure that everyone stays healthy during the rise of the pandemic in the United States.

“We’ve done a really good job of staying patient and trusting the process. We began summer workouts in June and since then we’ve had a few players/staff pop positive, but since then we’ve gone almost two months without a case and everyone is being very responsible by not putting themselves at risk,” he said.

As a safety precaution, McLean said they undergo COVID-19 testing every Thursday. He said he has been tested at least 19 times during that period of time.

The Cougars are expected to start their season on November 25 against Lamar. They are also looking at playing Boise State and top 10 ranked Texas Tech during their initial stretch of games.

“Basically a full season, take away maybe six games. We will see,” he said. “We have a chance to have a really good year, if we stay healthy and if the world follows protocols with COVID-19 so that the season doesn’t get cancelled.”

And as soon as he gets the clearance to start recruiting, McLean said the Bahamas is going to be his first destination.

“We have so much untapped talent in the Bahamas that people reap the benefits of when it’s a finished product, and it will be my job to eye potential talent early on, not only to get them to my programmes but to help them get recruited elsewhere,” he said.

“I’ve been working behind the scenes on getting a few kids recruited right now.

“I’ve established relationships with a lot of Bahamian coaches in my time gone. Number one is coach Kevin ‘KJ’ Johnson from C.I. Gibson and Mario Bowleg, the former head coach of the men’s national team. KJ played a major role in getting me connected with Frank Rutherford. I travelled with his team to play in the AAU Nationals back in 2005 and was in the process of transferring from St John’s to C.I Gibson so that he could coach me if I didn’t move to the States instead.”

McLean, who has an undergrad and masters degree in health administration, is married to his college sweetheart Arrion McLean and they are the proud parents of one son - Mikhail McLean Jr - with another one due late in December.