Tempers Flare Over Who Broke The Rules 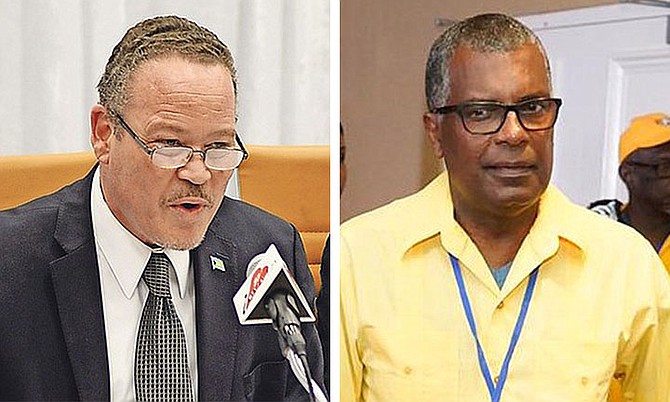 However, Senator Mitchell hit back, reminding Mr Bethel of the “infamous wedding” in which his son Carlyle Bethel was involved, resulting in many people being cited for violating COVID-19 regulations.

Carlyle Bethel made headlines this week as he stood as a groomsman in the wedding of Xavier Knowles, a Ministry of Health communications officer.

The wedding was attended by more people than is allowed in the Emergency Powers Orders.

Further, the group was photographed and recorded without masks.

Bethel, leader of the FNM’s youth arm, Torchbearers, along with the others, were cited by the COVID-19 Enforcement Unit.

In a Senate session yesterday Mr Mitchell told Mr Bethel that he hoped he was in a position to answer questions about Criminal Records due to COVID-19 Emergency Order violations.

“The laws don’t solve problems,” Senator Mitchell said during his contribution. “You can pass any laws you wish and often what happens with passing laws is the society ends of ignoring it. Politicians pat themselves on the back for having done a great job passing the law. Politicians ignore it and the courts, if they don’t agree with it, find themselves finding a way to get around it.

“I will also say, Mr Attorney (General) that I hope that you are in a position to respond to the point made by Senator JoBeth Coleby-Davis about this question of Criminal Records. The question is being asked whether or not it is the intention of the law for someone to carry a criminal record for a violation of these curfew restrictions.”

Senator Mitchell added that the Free National Movement was elected to deliver justice, fairness, equity, economic development “not to take us in reverse and we who are in opposition, have to make sure that while your hands are on the throne that that is what your mission is always, everywhere and at all times.”

Following Senator Mitchell’s remarks, the debate took a heated turn with the Attorney General castigating Mr Mitchell for having broken COVID-19 regulations in the past.

“Senator Mitchell is the last person to stand in this place to raise any question about anything to do with enforcement of COVID regulations and orders,” Mr Bethel said. “He himself, big old grey man, came into The Bahamas from the US, went to Freeport and broke the quarantine orders. He did not stay in quarantine.

“The restaurant he was photographed in was not a hotel restaurant. That was on the Our Lucaya strip. He broke it (quarantine) and was sitting there with his mask under his chin talking to some man who don’t live with him, which is also a breach of the COVID regulations. You are nobody to raise an issue about who broke what regulations in this place. You, yourself, violated it, wilfully, intentionally and knowingly.”

“I would like the Attorney to withdraw those allegations,” Senator Mitchell said. “They are of personal imputations and they are false. On every occasion that I have come into this country I have landed in this country lawfully and conducted myself lawfully. I broke no law. And, this is a red herring.

“What I ask the Minister is, will he explain the conduct of this infamous wedding which has taken place. This has nothing to do with me ‘bout breaking the law. He should withdraw those remarks.”

The back-and-forth continued with Senator Bethel responding, “I won’t withdraw them and as to the infamous wedding, I have never made any comment to anybody in authority on this matter, period. Madam President, I move that the question....”

He was cut off by an angry Senator Mitchell who replied: “No, Madam President. He made a personal assertion on me. He must withdraw.”

Attorney General Bethel continued repeating that he was not going to withdraw his remarks and the shouting continued.

“I do not withdraw it because your own conduct is brought into question whether you comply with the law,” said an irate Mr Bethel.

Senator Mitchell, still on his feet insisted the Attorney General withdraw the remark and accused him of being conflicted because of the “infamous wedding”.

“What has happened is that the person who has violated the law happens to be his relative and that is why he is making all this noise, trying to spread a red herring,” Senator Mitchell explained. “That’s what this is about. So, I am asking him to withdraw the personal imputation. You are in a conflicted position, trying to protect your relative here today by bringing up this foolishness.

“You have a responsibility as a Minister of the Government to explain what happened at this infamous wedding. That’s what you have to do! This has nothing to do with me.”

“I think he (the AG) should probably withdraw the section that called you ‘an old grey man’ or something,” she suggested.

Are you arguing with the Attorney General based on the fact that you are stating that his comments are incorrect? Yes, or no, Senator Mitchell?

“Were the statements the AG made incorrect relative to your coming in and not going into quarantine?”

Senator Mitchell continued to insist that the Attorney General address the wedding.

“Ma’am, I am not under cross-examination! He made an allegation about unlawful conduct,” he said. “I am saying I had no unlawful conduct and that is irrelevant to his role as a minister of the government to explain the conduct of a relative of his at this infamous wedding.”

Attorney General Bethel, who was visibly shaken, with documents fluttering in his shaking hands, eventually withdrew the “imputations” and continued with the proceedings of the Senate.

The Senate then adjourned to November 16 at 10 am.

I guess two wrongs make a right! It seems the law is only for those who are not wealthy or politically connected so they could know their place!

Comrade TheMess, picture the politically appointed under redcoats suffrage movement AG, rising up in the red chamber with a finger pointed at Freddy, “The Raven chides we colony's lickdabrush elites."

I am tired of old people drama. We need some new, thinking, risk-taking, principled persons in our politics.

This garbage needs to stop. The political foolishness is crazy in this country. If Fred has an issue with what happened at the wedding then he needs to man up and go speak with the people at the wedding. or the police. Carl Bethel's son is of age and is able to speak for himself. The AG is not responsible for the actions of his son or to answer for them. Fred sorry, but you out of order.

See why the Senate needs to be abolished. It is just a waste of time.

Carl Bethel is a QC and an intelligent man. To end the back and forth, all he had to do when Fred asked him about his son was to ask Fred about his son.

Quite a disgusting display of misconduct in the Senate by two men who so clearly don't belong there. This most childish spat is too easily summed up with the hyped battle caption: Bethel's Fleas vs Mitchell's Ticks.

Did Bethel see the competent authority with his mask around his neck with all the liquor glasses on the table.

Carlyle Bethel, the adult son of the Attorney General (who is a political leader in his own right), deserves to do the "Bank Lane Shuffle" just like the son of the poor woman from Over the Hill who holds no position. Based on the immature intervention by the Attorney General in the Senate, it seems though that young Bethell may not have learned some basic lessons, like two wrongs do not make a right. After watching the father this week, the half-hearted apology, selfish behaviour, lack of personal responsibility and audacity of the son to even do what he did makes a little more sense.

The Torch Bearers Association will be nothing but a laughing stock of scions of corrupt politicians and other senior government officials if Carlyle Bethel is not made to give up his leadership of that political organization. Don't expect him to do the right thing and step down anytime soon because it seems that, like his father, he's carrying way too many fleas.