Insight: We Need To Wise Up - Blind Allegiance To Parties Who Provide No Solutions Gets Us Nowhere 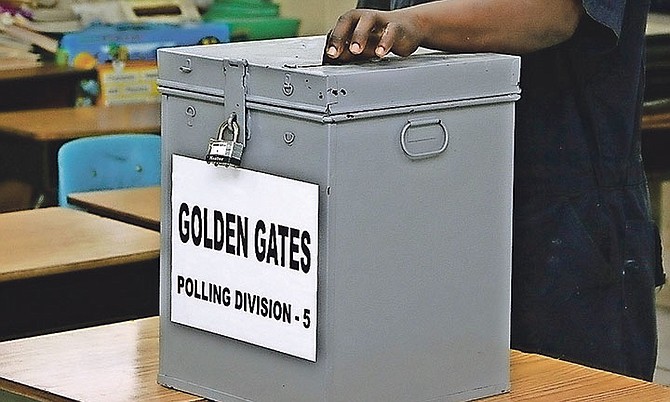 IDENTITY politics has been around long before my time and will be around for much longer. However, it may be high time for us to question how it has helped us as Bahamians. If you ask a Bahamian which political party they support, in most instances, they will not hesitate to tell you, “I is a PLP” or “I is a FNM”. For a country of people facing major problems, it is disconcerting we don’t examine our thought processes in this regard. Despite forces beyond our control such as natural disasters or a global health crisis, I fear the way we elect our leaders will largely remain the same.

What have we gained by being so predictable when election time rolls around? A vote – something so personal and powerful – is relegated to a form of black-market currency for one person to make a marginal gain compared with what the nation requires. For some, a vote is given to either of the two major political parties for even less. Whether it is nostalgia or disdain about the Pindling and Papa-eras, Bahamians have become far less concerned about what’s best for the country and more interested in being part of a group.

Somehow, our identities as Bahamians got lost or were never understood to begin with. The average Bahamian can tell you little about the history of our country, much less give a cogent reason as to why they support their political party. This notion of “I is a PLP” or “I is an FNM” – a complete dismissal of who we are as Bahamian people - is at the very core of our stunted development. The standard for which politicians would see as a benchmark is lowered and Bahamians who truly love their country and want to throw their hat in the ring are disenchanted with the idea of towing a party line and feel as though there are no seats for them at the table.

It’s why independent candidates have slim to no chance of being elected to Parliament. It’s why third parties swing elections rather than win them.

Even after a resounding rejection of the Progressive Liberal Party in 2017, the Minnis administration faces an uphill battle to be the first two-term government since Ingraham led the Free National Movement to back-to-back election victories in 1992 and 1997. Certainly, people make their jibes about the PLP led by Philip “Brave” Davis and Chester Cooper, but I can assure you, the prospect of them forming the next government is no laughing matter.

Just looking at the political climate, it’s not hard to tell.

With devastating hurricanes in 2017 and 2019, coupled with the enormous challenges as a result of the coronavirus, the FNM government has had no shortage of adversity. Add to that, the VAT increase and a number of undelivered campaign promises such as the full roll-out of the Freedom of Information Act, and evidence of the hurdles of the FNM being re-elected is clear.

Something we’ve long failed to appreciate is the opportunity to govern a country isn’t an act of charity. It must be earned – or at least it should be. What we’ve typically seen is an electorate so resentful of its government that they vote in their next suitor without any qualification. Rather, it is just an act of retribution for any number of difficulties and frustration under their predecessor’s leadership.

What’s unfortunate for Dr Minnis and company is that there has been much difficulty and frustration to go around. No doubt, as many people discount their national identity for their political identity, there will still be those that support the government despite how hard life has been – just because they cannot stomach the idea of voting for any other political party, namely, the PLP.

Thankfully, though, hope lies in the evolving dynamics as voters are educating themselves more. While this may be a small segment of Bahamians realising the power in their vote and the strength in uniting as Bahamians, one day, we can be assured that things will change.

We should also be grateful that while we have impeded our growth tremendously in this manner, the divisive nature of identity politics has never devolved to the point of violence or hatred against our brothers and sisters. From Nazi Germany to Trump’s America, we have examples, past and present, of how ugly things can get when citizens identify with a subgrouping rather than being open-minded to a multitude of perspectives and diverse thinking. We are not where we want to be yet, but we are thankfully not where we could be given the level of intense stress Bahamians experience daily.

The issues our country is facing are vast and the traditional approaches to solving our societal, economic and health challenges will not sustain us in a current or post-pandemic world. We are going to be forced to change one way or another. Such a change will need to occur from the bottom up as Bahamian citizens around the length and breadth of the country will need to understand the state of play and mature politically.

We are full of bright minds here at home and in the diaspora – not solely in the PLP and FNM. We need to remember that.

This was a very nice article to read, agreed on most points.

I believe that the amount of party loyalists will gradually decrease due to the older generations dying off, our younger generations seem to have more characteristics reminiscent of swing voters than the party vanguards that have dominated our past.

Agreed with you on the rotten luck of the current administration. No post-Independence government has had to guide the nation through a more difficult period, I don't think anyone here would like to be in the shoes of Minnis right now, politically speaking. They have not been perfect, but I can recognize the effort that they have put in for some areas. As you mentioned, my biggest gripe is the lack of fulfillment of many of their platform promises. There is no reason that they could not institute term limits or a FOIA Act before their term expires. It is quite disappointing how they have failed to complete some of the simpler parts of their manifesto, but time will show what else they do before May of 2022. At this rate, they are the best option on the ballot by far.

I disagree on your outlook for the future though. Our population is not growing any more intelligent, if anything, we are losing our brightest minds abroad. One of the biggest reasons that we are in the mess we are in today is the fact that our voter base is comprised of a majority D average population. It is far too easy to swing some votes with rum, fried chicken, and a marlin in a hat when the people you are pandering too have no care, or quite possibly, even the ability to comprehend the decisions that they are making. I hate to be the bearer of bad news, but this will not get any better. The economic decline of the Bahamas is likely to continue for the short-term future, and our brightest minds will continue to leave and saddle us with worsening voter demographics. No young person with the ability to leave is ever going to come back here to poor pay (unless they hook up with the right people/start their own business/thief out of the government treasury), garbage infrastructure, high cost of living, political system dominated by cronyism, etc. Things are going to get a lot worse before they get any better.

Mr: Strachan in spite of all the spin the PLP party did a lot of good. History will record these facts.

Your shepherd, on the other hand, talked so bad about VAT then increased it 60% it hurt the poor people. who believed the lie." it is the peoples time" Then they wanted to increase their salaries on the backs of the poor.

Being as you are a Strachan. You know the facts. You shepherd has failed..

Your shepherd has failed. All of the D grade Nonsense designed to discredit Bahamians is just to bad. it does not help those who wish to appear superior,

What has the FNM really done to uplift the average Bahamian ZERO.

The FNM Government was lost in a deep and dark wilderness before COVID 19 or the hurricane. what it has done is give them something else to blame.COVID 19 Dorian and the PLP

What will Brave & Chester dem do any different from Perry's 2.0 Cabinet??