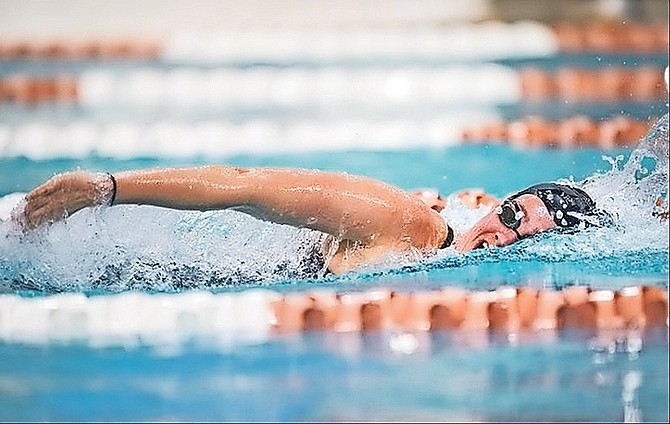 With a first and second place finish in the women’s 400 and 200 metre freestyle races respectively in her regional competition in San Antonio, Texas, Grand Bahamian Joanna Evans placed third overall in both events at the US Open Swimming Championships.

As a result of the coronavirus pandemic, US Swimming staged this year’s championships virtually from nine different sites around the country with all of the results tabulated to determine each swimmer’s final position.

Evans, competing at the North East ISD Blossom Athletic Complex Friday, clocked four minutes and 11.28 seconds to secure the victory in her speciality in the 400m free, while she was second in the 200m free in 1:59.26.

Placing third overall in both races combined from the other eight sites, Evans also attained the B qualifying times for the postponed 2020 Olympic Games, scheduled for July 23 to August 8, 2021 in Tokyo, Japan. Her 400m time was well under the B time of 4:15.34, but she will need to attain 4:07.90 to qualify for her second straight Olympics. She also set off her Bahamas national record of 4:07.60 set on August 7, 2016 at the last Olympics in Rio de Janeiro, Brazil.

Emma Weyant, representing the Sarasota Sharks, posted the fastest time overall in 4:10.38 with Paige Madden from the University of Virginia trailing in 4:10.42 out of a field of 77 swimmers, who completed the race at the different sites.

Madden had the fastest time overall in 1:57.64, followed by Evans’ teammate Madisyn Cox of the Longhorn Aquatics in 1:58.97. A total of 91 swimmers contested the race.

Evans, now training with her alma mater at the University of Texas where she’s competing for Longhorns Aquatics, said she was quite pleased with her performances.

“I was pleasantly surprised,” said Evans about her performances. “I had a little bit of rest, so I was able to put both races together. They were well planned. It was just nice to be racing again. I haven’t raced in a long time.”

Evans, 23, was referring to the fact that COVID-19 halted all competition from March. But even though she didn’t get to line up with the other competitors in the competition, she said it was a good gauge to determine where she’s at in her training. “The 400m, there wasn’t that much competition at my site, but I am very glad with the way I swam in it,” she said. “The 200m was at night and I had a few of my teammates in that heat. We were all pretty close, so it was nice to actually get some races in.”

Looking at the competition, which coincided with the International Swimming League competition in Budapest, Hungary where some of the big names in the sport competed, Evans said she’s right where she needs to be. “I haven’t had a chance to check up with my coaches as yet, but moving forward when I go back to practice on Monday (today), I will just have to continue working on the small things,” she stated.

With all of the COVID-19 protocols in place, Evans said there were less people at the meet in San Antonio, but it was well organised with a few fans in the stands. “It was the usual mask wearing and social distancing with the people around you,” Evans pointed out. “It was quite an interesting meet. It went very well.”

The goal now, Evans says, is to get another good block of training as she gets prepared for the trek to Tokyo. She is hoping to compete in her next meet some time in January. The 5-foot, 11-inch graduate of Bishop Michael Eldon High School completed her eligibility for the Longhorns in 2019. She earned a degree in sustainability studies and has racked up an impressive résumé as a swimmer.

She won three gold medals at the 2018 Central American and Caribbean Games in the 200m, 400m and 1,500m freestyle. She also captured a silver medal in the 400m and bronze in the 800m freestyle at the 2017 World University Games.

And she was the national flag carrier during the 2018 Commonwealth Games in Gold Coast, Australia in April where she fell short of getting on the podium with a 4th place finish in her speciality in the 400m free in 4:08.82 and was 12th overall in the 200m free in 2:01.75.