Face To Face: Women Make Up Half Our Population - Why Not Half The Assembly? 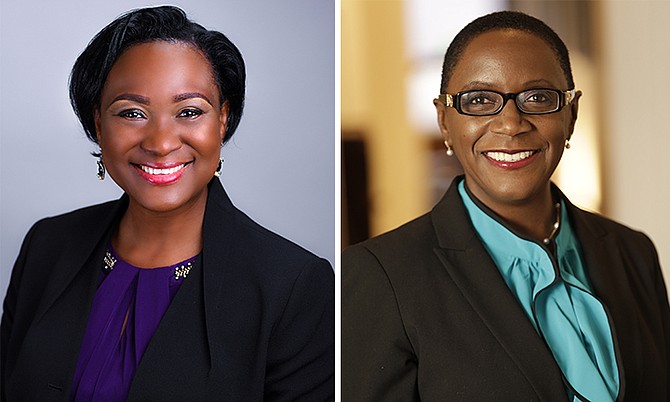 Women political leaders are seriously outnumbered in The Bahamas – a fact that the Caribbean Institute for Women in Leadership (CIWiL) intends to change. The first step was to establish a Bahamas chapter of this regional organisation.

This month, CIWiL Bahamas celebrates its first anniversary and in a short period of time, the women who make up this non-governmental organisation have been making serious inroads towards their goal - nurturing women leaders, supporting those already in existence and making the public aware of the importance of having women political leaders.

The president of the Bahamas Chapter, Charlene Paul, told me they held a successful women’s webinar series under the title: “Girl, Stop Making Excuses!” and invited a range of speakers to address scores of women in various forms of leadership throughout The Bahamas.

The series was well attended, then posted on to CIWiL Bahamas Chapter’s Facebook page, with more than 20,000 views. She said it shows people do care about women in leadership; looking at the important role women play in organisation, nurturing and effectiveness in their own homes.

The former director of the Department of Gender and Family Affairs and United Nations gender and women’s rights advisor, Gaynel Curry, was among the presenters making an impassioned plea for Bahamian women to rise and take their stance in politics, helping to shape the future of this nation in a positive way.

She is calling for women to take up the calling for representation, and push to make up 50 percent of the women political leaders in this country as we head into the upcoming General Elections.

“I would like to see more women stepping forward as candidates – women who are ready to lead on day one – women who are fully cognizant of the challenges and opportunities that they will invariably face as women leaders,” she said.

“We know it won’t be easy and those who are already in these positions can attest to that. But, it is time to reset; and resetting is an action word which requires undoing something and/or redoing it to improve or change the status quo.

“There is an urgency to move beyond the 13 percent of women leadership currently in the House of Assembly. We need to take immediate steps to remove the the impediments that block the achievement of 50 percent women political leaders in the House of Assembly… and I did say 50 percent… because women make up half of the population of The Bahamas. So, why not 50 percent? Impediments include financing, training and mentorship just to name a few. They are potential barriers but they can be easily overcome as a strong people and by working together in a non-partisan way.

“It is also important and urgent to negotiate female leadership that insists on substance over form as a priority in The Bahamas. This requires a level of unmitigated honesty about 21st century needs in order to have strong, astute women political leaders with national and global impact. We must be honest if we want world change.”

Women not only in Parliament and Cabinet are needed, she added, but women who are in decision making positions in politics, including helping to decide issues such as which candidates are chosen to stand and in which constituencies.

For the women who read this and think that they may want to rise to the challenge, Gaynel suggested they ask themselves a series of ‘why’ questions, including: “Why do you want to run for office? What process do you hope to influence along the way? What do you intend to achieve once you make it into the political arena? What are you aiming toward improving? What makes me desire leadership? What do I bring to the table as a leader? What skillsets do I need to ensure I am successful in this arena in this century? What am I prepared to do to ensure more women leaders are in the political arena? How do I build up and carry other women along? “

“It’s about asking yourself a series of questions, some of which are designed to make you very uneasy,” Gaynel added.

What was impressive, she said, is the amount of women who were willing to offer themselves in the last General Elections, including independents.

“Everyone in this country has something to offer,” she said.

“We need to think about the next generation of leaders. The Bahamas is far too small for tribalism. We must be willing to go beyond ‘sameness’ and rely on the talents of everyone, regardless of political affiliation, class, gender, age, or ability or disability.”

CIWiL Bahamas took on another great cause in its first year of existence. President Paul reports that her group was active with the Department of Gender and Family Affairs, Ministry of Social Services and Urban Development, as well as Zonta Bahamas, to push for policy change through the Gender Based Violence Council. Other stakeholders included the Royal Bahamas Police Force, the Crisis Centre, Bahamas Union of Teachers, the Men’s Desk and many others, including attorney Marion Bethel Sears, international expert of CEDAW (the United Nations Convention to End all forms of Discrimination Against Women).

A statement to Minister Frankie Campbell points out: “Currently, there is no comprehensive law on gender-based violence. The Domestic Violence (Protection Orders) Act, which came into force on 22 December 2008, focuses on domestic violence, defined as physical, sexual, psychological or financial abuse that is committed by a person against a spouse partner, child or any other person who is a member of the household or dependent.

A new law on gender-based violence against women and domestic violence had already been proposed by the National Task Force for Gender-Based Violence in 2015.

On that basis, the previous administration had started the process of drafting a Gender-Based Violence Bill.

The bill, prepared in 2016, is currently under review by the new administration. The Special Rapporteur believes this provides the Government with a unique opportunity to make use of the newly adopted CEDAW General recommendation number 35 and develop a comprehensive legislation to address all forms of gender-based violence against women and domestic violence. It would cover prevention, protection and prosecution measures and coordinating machinery.”

In 2015, The National Task Force for Gender Based Violence, chaired by Justice Rubie M Nottage and deputy chairpersons Dr Sandra Dean-Patterson and Dr Robin Roberts, presented a Strategic Plan to Address Gender-Based Violence in The Bahamas (the Strategic Plan).

Some key aspects of the Strategic Plan have been implemented since its presentation, such as the creation of the Department of Gender and Family Affairs. Unfortunately, there are many elements which remain unattended. Therefore, a group of concerned NGOs have come together to lobby for focus, attention and action to combat Gender Based Violence in our Communities.

“The goal is to move our collective activism to action,” states a document to the minister, calling for an officially recognised Gender-Based Violence Council.

The committee chair is Marisa Mason Smith, who is leading Zonta Bahamas’ national campaign of 16 days of Activism to End Violence Against Women and Girls in the coming days. The group started today with the tying of the first orange bow.

The primary focus and development of the Gender-Based Violence Council is to be a conduit for the equality of all women regardless of political, economic, social, religious affiliations and or persuasion. The ultimate goal of the GBV Council is to bring about amendments and changes in the current legislation, and to create relevant and appropriate GBV legislation that will directly protect women and girls within The Bahamas.

In collaboration with ParlAmericas, CIWiL held its regional board meeting in Bridgetown, Barbados February 12–13 this year. This high-level meeting was attended by representatives from Grenada, Jamaica, Antigua and Barbuda, Trinidad & Tobago, St Kitts & Nevis, The Bahamas, and Canada.

Nice thought Ms. Darville, unfortunately, the majority of the women in this country appear not to mind being disenfranchised as proved by the last referendum on gender equality.

And don't even bother asking the Christian Council, the radical evangelicals, or even the average Bahamian man for that matter for their support, you'll get the same answer.

Fantastic article and topic. 13% is shockingly low! Agree 110% that it should be much, much higher. Having good female role models and mentors would be a good way to help the younger generation strive and achieve their career aspirations. It's fairly obvious that a large portion of the male leadership in this country are vastly underqualified for the job and have no idea what they are doing!!

How many woman put themselves forward to run compared to men? I imagine that a lot more men look to get into politics so it only makes sense that there are a higher percentage of men in government. I'm pretty sure our population doesn't look at gender when voting in their constituency.

I believe that the domestic violence issue that our nation faces needs a complex solution. Opening more shelters is a very easy solution that needs to be done on New Providence or Grand Bahama for sure, but we need a different answer for the smaller islands where blood runs thicker than water and everyone knows everyone. I honestly am not sure what is the best solution is for those smaller communities.

That being said, we do not need to import the American fad of grievance culture and identity politics here. Our nation's national development has been stunted due to the fact that we have a culture that rewards who you know and are in cahoots with instead of actual merit and achievement. Adding the issue of affirmative action hires on top of the already existing issue of cronyism hires does nothing to fix this nation's problems. I wish that more people will realize that nothing is given in life, everything has to be earned. You don't get any special treatment for having a specific kind of genitalia.

Using this same logic, 10% of our MPs, government hires, cabinet ministers, other forms of national representation should be conchy joes. Using Maynard-Gibson's logic from the article posted a couple days (maybe a week or so now) back, why don't we mandate that every publicly listed company have a conchy joe sitting on the board? You can't force representation based on certain physical characteristics and then ignore the others.