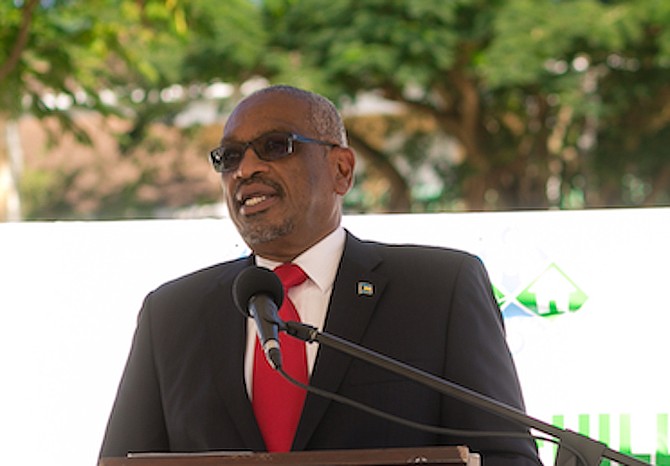 THE domestic travel visa, which is expected to facilitate the removal of the two-week quarantine requirement for inter-island travel has now been completed, according to Prime Minister Dr Hubert Minnis.

Speaking to reporters yesterday, Dr Minnis said he was informed by Tourism Minister Dionisio D’Aguilar that the visa had been finished and will subsequently be rolled out after officials complete its “trial run”.

“I’ve been assured by the Minister of Tourism that the domestic travel visa is now ready and we’re going to do a trial run on it and what that would mean is once that is ready, individuals can now log on to the travel visa and they must partake in that and attach to the travel visa what you call a risk assessment form which is a questionnaire,” Dr Minnis said when asked for an update on the visa.

“They must fill that and complete that every day and they must have the rapid test on the fifth day.”

That is all a part of the travel visa. Once that is in place – and I’m told that it’s completed – then the quarantine would be removed but it’s essential for them to complete the daily risk assessment.”

“If that is not done, there’s a penalty or a fine and I think it’s about a $100 fine for each day or one-week imprisonment for each day because we are taking this matter seriously because their irresponsibleness can jeopardize the future of our country.”

The two-week mandatory quarantine requirement for domestic travel was initially set to be removed on November 8, while individuals travelling from New Providence to any other Family Island would still be required to take a negative RT-PCR test no older than five days old.

But, just two days after this was supposed to be scrapped, Dr Minnis reimposed the 14-day quarantine for all persons travelling from New Providence to the Family Islands.

Last week, Health Minister Renward Wells maintained the visa was still expected to be completed on Friday, but no further details were provided by tourism officials that confirmed the domestic health visa was ready to be rolled out.

According to Dr Minnis, the domestic travel requirements – similar to that of the international travel protocols, will require travellers to complete a questionnaire daily as part of a self-assessment process and to also take a rapid antigen test five days after arrival.

His comments came after he urged Bahamians to avoid unnecessary travel abroad, where cases are climbing in many countries.

Since the country re-opened in November, the prime minister said he has received reports of Bahamians not wearing masks while abroad because it is not a requirement there.

“We’ve opened up our borders and we look at what happened last time,” Dr Minnis said. “The infections were not related to the guests coming in the infections were related to us going out and therefore, I would advise Bahamians not to travel unless absolutely necessary.”

“And one of the reports were getting back is a lot of Bahamians are visiting neighbours to the north and other flea markets and other stores and they’re not wearing any masks because that is not a requirement there.”

He added: “But they should wear masks and still practice social distancing and so even because the numbers have gone up in the northern areas and just how over 4,000 were infected, there’s a possibility of even more to be infected because the numbers are higher and there’s a greater chance of you being in contact with individuals. I would advise Bahamians if you’re travelling first and foremost, you should not travel unless absolutely necessary. If you travel, then wear your mask.”

Yesterday, Dr Minnis also addressed the spike of COVID-19 cases on Grand Bahama, where he noted that health officials are still assessing the island to determine what type of transmission is happening on the island.

“They are assessing to determine community spread but at this particular time, they have isolated the (cases) but that does not rule out the possibility that those individuals either could have had visitors to their place and subsequently move out but viruses have an incubation period.”

This idiot really needs to get his head out the sand. So what about the tourists whom come here that don't wear masks in their own country? I guess they don't pose the same risk as a Bahamian who travels to the states. This really is too funny. How many KARENS you see in the states on videos refusing to wear a mask and they'll be the same ones who come here showing no symptoms and infect ppl. Yet it's only us the Bahamians according to this fool.

Amazing they are getting reports of Bahamians not wearing masks but couldn't not track the 3 ladies on a island less than 21/7 for 2-3 days for breaching emergency orders to go on the beach. Like you really can't make this s*** up.

As for the visa/ questionnaire will the same rules apply to the tourists who don't answer them? Or we'll give them a slap on the wrists and say oh their only tourist they won't do any harm.

Oh and another thing you guys keep saying this to save lives term yet the borders are open to the USA where cases are out of control on a daily basis? Oh sorry I forget it's only the tiny fraction of us Bahamians that'll wreak havoc for the Bahamas

Well how would one check daily if he us in a place where there is no internet?

People on bail for murder verify at the police station once a week.

When you catch this cold you report every day!!!

The human rights lawyers are quiet because no one is paying them.

Minnis's head is now completely effed-up and every Bahamian should be loudly calling for his immediate removal from office. Untold permanent economic damage is now being done to our country each and every single day this most incompetent, arrogant, nasty and vindictive SOB is allowed to stay in office and treat the vast majority of Bahamian people and Bahamian owned businesses like shiit.

My Comrade Sheepie, so wrong me's done prepping for general election day comes to get the chance to orchestrate the Xin' application me 6 voting ballots. If not planning be's Xin' all 6 blank ballots do pass them on to another be's much appreciative voting soul.

I do not know where these idiots that make up these rules live but can someone tell them that many family islands do not have reliable internet service,if they have service at all. So how will someone answer your questions every day? Also how do you know if they will be truthfull? Is this a stupidity competition,because if yes you are the champions