Peter Young: And You Thought Things Were Bad In The White House 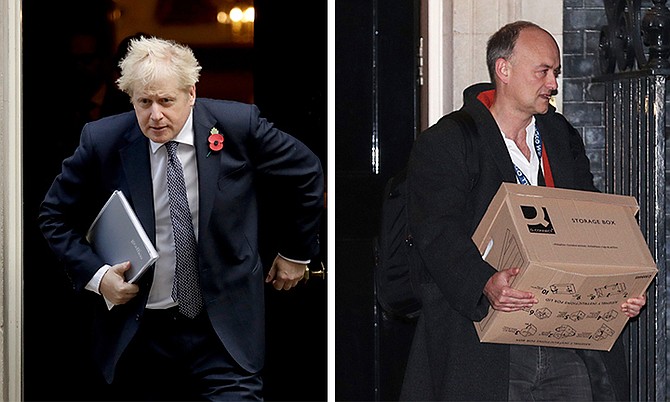 Whether or not one agrees with former US President Richard Nixon who said, with supreme irony, that he ‘rejected the cynical view that politics is a dirty business’, there is no denying recent goings-on at the heart of Britain’s political establishment have been dramatic and messy.

It has become clear that recently there has been infighting, turmoil and a power struggle among the Prime Minister’s staff at No 10 Downing Street. This has led to the abrupt and enforced departure at the end of last week of Mr Johnson’s chief policy adviser, Dominic Cummings, whose ally and director of communications, Lee Cain, has also left office – apparently they had become known as the “vote leave duopoly”.

Cummings owed his reputation as something of a political genius - with incisive organisational skills and an aggressive approach - to having masterminded the ‘Vote Leave’ campaign in advance of the 2016 UK referendum that led to Brexit. This was followed by his key role in the Conservatives’ thumping election victory in December last year - in particular, knowing, as he did, how to appeal to disenchanted voters in order to secure their support in constituencies in the North that were traditional Labour strongholds.

But his combustible and combative nature was less well suited to the business of governance that requires conciliation, compromise and co-operation.

The UK press is covering Cummings’ departure exhaustively because, until he walked out of the front door of No 10 for the last time, he was, in effect, the second most powerful person in the country.

How, one might ask, could such an individual acquire that level of power and influence? As a special adviser appointed by the Prime Minister, he was an unelected bureaucrat. There is a team of these across the UK government - perhaps 100-strong and known as Spads - who are politically-appointed, work in the shadows and oil the wheels of government. But they are strictly advisers within the rule that “advisers advise and ministers decide”. This is, of course, important because ministers are elected politicians who are open to scrutiny in Parliament and the wider world.

In a parliamentary democracy, if major decisions are allowed to be made by an appointed meritocracy, such a practice can open the door to authoritarianism and dictatorship because the general public does not know who such people are so nobody can be held accountable.

It was the case, however, that Cummings’ reputation placed him in an unusually strong position as an adviser to the Prime Minister who, it was said, was too beholden to him. He had the ear of his boss to an unusual extent insofar as Mr Johnson perhaps relied too heavily on his ideas, judgement, counsel and drive in getting things done.

This reliance and trust was particularly evident earlier this year when Cummings himself flouted the then national lockdown rules - which he had had a part in drawing up - by making a 260-mile long car journey to the northeast of England. Most people thought he deserved to be sacked, but, because of what seemed to be misplaced loyalty, Mr Johnson declined to do so.

It is claimed that recently the accuracy and quality of Cummings’ advice was being increasingly questioned in the light of the government’s growing number of U-turns together with its chopping and changing or altering course.

But, worst of all, his arrogance and confrontational style - and what has been termed his exhaustingly iconoclastic and adversarial approach - created unnecessary strife and conflict and made him a divisive figure.

He did not hide his disdain for political convention and for the Tory parliamentary party and he was dismissive of others. Notably, he denigrated the civil service and bullied or treated with contempt anyone who challenged his methods; and, reportedly, he revelled in adopting strong-arm tactics and secret media briefings to push through a particular agenda.

Clearly, Cummings was exceeding his powers and creating a toxic environment. In light of all this, it may seem strange that he lasted as long as he did and was not reined in before by a Prime Minister who tolerated this sort of behaviour and abuse of power within his own office. But nobody is indispensable and advisers to ministers come and go.

His enemies and many others are surely glad to see the back of him, and apparently the catalyst was Mr Johnson’s fiancée, Carrie Symonds, who appears to have convinced him that his chief policy adviser was becoming a liability.

As the controversy continues, some will see the brouhaha as a cautionary tale for the exercise of parliamentary democracy.

Many are now hoping the Prime Minister will reset his way of making policy and conducting business and will restore integrity and trust by ushering in a new era of more conciliatory, consensual government that accords due respect to ministers and MPs who may have differing opinions.

Most importantly, it is said he needs to improve relations with members of his own Tory party and revive the traditional role and influence of his Cabinet which, it is said, has been too often simply rubber-stamping decisions made by small groups of ministers.

One of the two main issues now confronting Mr Johnson is the nation’s full and final departure from the European Union - with or without a trade deal - after the transition period ends on December 31. The other is the COVID -19 pandemic which is seen as the biggest crisis since the Second World War.

Despite the sudden eviction from No 10 of the two “vote leave: protagonists, it is unlikely Mr Johnson will change tack on Brexit at this late stage, though it is possible he will be forced into last minute concessions to the EU. As for coronavirus in Britain, I offer comment in a separate piece on this page.

Vaccines - a chance for Boris to wipe the slate clean

It has been clear for some time that European countries were hit with a tsunami of new coronavirus cases in September and that this constituted the infamous second wave of infections.

The result has been further lockdowns, despite their ineffectiveness, and the infliction of more suffering on many people. There has been untold damage to their wellbeing and mental health - not least to the residents of care homes who have been denied visits from family and friends - as well as to their livelihoods and the economy as a whole.

Even though thousands of coronavirus cases are still being recorded and the number of deaths in the UK has risen to over 50,000, it is clear that treatment of serious cases has improved and many will hope that the terrible statistics will dramatically improve following the announcement by the US company, Pfizer and its German partner BioNTech, that a potentially effective COVID-19 vaccine will be available soon - possibly as early as December.

Prime Minister Boris Johnson has warned, however, the pandemic is far from over and the availability of a vaccine should not lead to immediate complacency and the lifting of social distancing measures.

Commentators are now saying every single person in the country should be offered a COVID-19 vaccination free of charge – and the Regius Professor of Medicine at Oxford University, Sir John Bell, is recorded as saying that there is a ‘70 to 80 percent chance of vaccinating all vulnerable groups by Easter’, as long as ‘they don’t screw up distribution of the vaccine’. His scepticism relates to the UK’s government’s less than stellar record in relation to issues like shortages of personal protective equipment and the test and trace system as well as the poor handling generally of the pandemic.

Most people will surely agree that, as a priority, vaccines ought to be made available first to those most at risk like the elderly, care workers and front line medical staff. But everyone will want assurances that the relative speed of the development of vaccines has not meant that safety and accountability has been compromised or relaxed in any way - though, as with any vaccine, there will always be some risk. According to reports, there are some 200 vaccines being developed worldwide of which only 11 are in the final regulatory approvals process. The UK government has apparently ‘forward purchased’ a total of 190 million doses of those which have been most publicised – Pfizer and BioNTech, the joint enterprise between AstraZeneca and Oxford University, and the French company Valneva.

It is now being said Britain’s overall recovery depends on effective distribution of a vaccine and getting as many people as possible to take it as soon as that is feasible. If Mr Johnson’s government is able to achieve this, I believe its past failures in dealing with the virus during most of the course of this year will be forgiven and forgotten by the public. In that case, the Prime Minister will be personally redeemed - and I wonder whether there are any lessons we in The Bahamas can draw from all of this.

This time last year, I wrote about the continuing civil unrest in Hong Kong that had developed into the most serious political violence since Britain handed the territory back to China in 1997 at the end of its 99-year lease. The unrest was partly in reaction to what was seen as Chinese meddling in Hong Kong’s internal affairs. It is claimed this has led to the gradual erosion of the freedoms guaranteed for 50 years (from the 1997 handover) by the 1984 Sino-British Joint Declaration which created the agreed system of “one country, two systems”; but the riots themselves were sparked by the ill-fated Extradition Bill which would have enabled the Hong Kong authorities to send criminals to stand trial in China.

As the demonstrators intensified their demands to include calls for full democracy, there was an increasing danger of Chinese intervention. It was therefore no surprise that Beijing followed up last June with a new controversial, far-reaching and sweeping national security law. This criminalised what was termed subversion, separatism, terrorism and treason, and it was seen in Hong Kong as a serious threat amid fears it would lead to greater activity by Chinese police and security agents and a stronger clampdown of political dissent and pro-democracy demonstrations.

It is clear China is a repressive state that stifles dissent. So Beijing has now gone a step further. Last week, the Hong Kong government - led by its pro-Beijing Chief Executive, Carrie Lam - disqualified four opposition members of its legislature for ‘endangering security’. This came after China’s Parliament passed a motion allowing the Hong Kong executive to expel legislators without resort to a review by the courts. The chief executive told reporters the disqualifications were ‘constitutional, legal and reasonable’ and were needed to uphold the territory’s Basic Law. As a consequence, the remaining members of the 19-seat pro-democracy group in the 70-seat legislature have resigned in protest.

China is now saying that lawmakers should be disqualified if they support independence for Hong Kong, refuse to acknowledge the mainland’s sovereignty, ask foreign forces to intervene or in other ways threaten national security. This is all-encompassing and the dismissal of the four legislators is widely seen as the latest attempt by China to restrict Hong Kong’s freedoms - as such, it is an example of its ever-tightening grip on this semi-autonomous city.

In response, British Foreign Secretary Dominic Raab has called this action ‘a further assault on Hong Kong’s high degree of autonomy and freedoms under the UK-China Joint Declaration’. He added ‘this campaign to harass, stifle and disqualify democratic opposition tarnishes China’s international reputation and undermines Hong Kong’s long-term stability’. It has also been condemned by the US and the EU together with organisations like Amnesty International.

But, while the UK has offered a route to British citizenship for those Hong Kong residents still holding British National Overseas status, it remains to be seem what other action may follow.