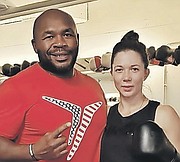 AFTER spending the past six weeks in sparring and training sessions for Sarah Mahfoud, Bahamian heavyweight fighter/ trainer Sherman ‘The Tank’ Williams said it was disheartening to learn that her December 11 fight in Las Vegas was called off.

“After we sparred on Friday, we got a letter from the co-promoter that the Las Vegas, Nevada Commission was unsure if they were going ahead with anymore contact sports because of the rise in COVID-19,” Williams said.

“On Saturday, it was confirmed that all of the shows were suspended because of the high number of COVID-19 cases in the United States and because of this new strain of the mink in Europe, so everything was dropped.”

It was a big disappointment for Williams, who claimed that the camp went very well for Mahfoud, the current International Boxing Federation (IBF) female featherweight champion, who is undefeated in 10 fights.

He said he was hoping that the bubble that Ultimate Fighting Championship (UFC) had created would have worked so that the fight could go on.

“I was pleased with her progress and I was training every day, so I felt good about all that transpired for us,” Williams said. “We are living in serious times right now. There is no one that has not been affected by COVID-19 directly or indirectly by a family member or friend.

“We had already signed a contract with UFC to arrive in Las Vegas on November 29 and we would have been quarantined for 10 days and there would be total seclusion at Apex. We would not have been allowed to train in any facility than the one they had at the hotel.”

Williams, with his fight in January up in the air, said he’s now trying to get out of Europe before the extreme measures fall into place as a result of the widespread outbreak of a new variant of the virus which causes COVID-19 in mink farms.

Last week the Danish government announced it planned to cull the nation’s entire mink population in order to contain the spread. There are between 15 and 17 million mink in Denmark, whereas its human population stands at around 5.5 million.

“First things first. I want to get out of Denmark and either end up in Amsterdam or Belgium and try to get to Florida from that direction,” Williams said.

“Denmark’s border to the north of Hamburg, Germany has been closed for two weeks. The whole Scandinavian is closed.

“It’s getting extreme. They have a soft curfew here at 10pm. Businesses are still open in Denmark. People can still dine out, but it’s until 10pm. Sunday was the last day you could worship at church. Everything is getting ready to get shut down.”

With the mink theory of animals spreading to humans or vice versa, Williams said it has created a panic in Denmark where the streets are virtually empty and there are no tourists in the city centre.

“It’s just been weird to just see everything empty,” he reflected.

“I went to church on Sunday and there wasn’t even six people in attendance. The streets are just empty. It’s a strange situation here.”

The Grand Bahamian, who has travelled extensively to fight during his pro career, said he was at the airport during the interview with The Tribune trying to get a flight out before everything shut down.

Unfortunately, he won’t be able to leave until today on the only connecting flight to Amsterdam where he will have to go to Atlanta, Georgia and then onto Miami, Florida where he resides.

“They used to have flights at least three days a week and now they’re down to just once a day, or twice a week,” he said.

“I’ve been a lot of places and seen a lot of things, but this is unrealistic to say the least.

“One half of the whole country didn’t have any public transportation. It’s hard to move around. Everywhere is just empty.

“So right now, I just want to get on our side of the Atlantic and get back to Florida safely.

“Travelling is hectic and so I would advise everybody, unless it’s a life strengthening situation, I don’t think it would be worth it to travel to Europe right now. It’s just too complicated.

“I had seven COVID-19 tests in the last few days,” he added.

Having heard about the restrictions being put in place by the Competent Authority, Williams said Bahamians should simply abide by the guidelines, even though they might seem a bit harsh. But he said it’s the only way to get the coronavirus pandemic under control.

“Nobody likes to be in lockdown or stand down, but I think this is the only way we are going to get out of this,” he said.

“It’s an awkward situation that I am in, but I am a survivor. I will get through this and get back to Florida.”

Williams, 47, has compiled a record of 42-15-2. He last fought in Denmark in December 2016 when he stopped Brazilian Mateus Roberto Osorio with a first round knockout with the “conch punch” at the Ceres Arena in Aarhus.

Although he didn’t have any fights this year, due to COVID-19, Williams fought twice in 2019, winning in Colombia with a knockout over Samuel Miller on January 18 and coming back home to win on his own show against Stacy Frazier at the Kendal Isaacs Gym on April 13.