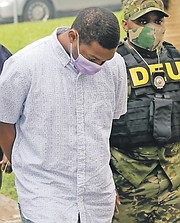 A CORRECTIONAL officer, found with almost $2,000 worth of marijuana, was yesterday sentenced to seven months in prison.

Ivan Forbes, 28, was arrested after officers found $1,820 worth of Indian Hemp in his jacket and vehicles on November 16.

He pleaded guilty to three counts of dangerous drug possession with the intent to supply during a hearing before Chief Magistrate Joyann Ferguson-Pratt.

The court was told that officers, acting on information around 1pm that day, proceeded to the Bahamas Department of Correctional Services. Upon their arrival, they saw and spoke to the chief correction officer, who pointed out the accused. Officers then searched Forbes and found three black taped packages containing five ounces of marijuana in his jacket pocket.

On the same day, officers took the accused to his Elizabeth Estates residence where he pointed out his white Honda vehicle. When officers searched the car, they found 7.18 ounces of marijuana in a cooler box in the back trunk of the car. At the time, Forbes told officers the drugs were his and claimed no one else knew he had them there. The prosecution said Forbes then took the officers to his second residence off Baillou Hill Road, where he pointed out a silver coloured Nissan March. When officers searched that vehicle, they found 10.5 ounces of marijuana under the front right driver’s seat. Forbes was subsequently arrested. In an interview with police at a nearby station, he admitted the offences.

Forbes was represented by attorney Jomo Campbell. He told the magistrate his client was severely diabetic and was the primary breadwinner for his household.

In response, Magistrate Ferguson-Pratt told the accused he found himself in “hot water”. She said there could never be a justifiable reason for a law enforcement officer to break the law and said the fact that Forbes brought the drugs into the prison when he worked there made his actions even worse.

“There must be a higher call for you to obey the law and uphold the penal code,” she said. As a result, she sentenced him to seven months in prison and fined him $6,000.

In a separate incident, a fisherman who was found with more than $1,000 worth of cocaine was fined $5,000 yesterday. Martin Percentie, 43, was arrested after officers found $1,245 worth of cocaine in his Harbour Island residence on November 17.

He pleaded guilty during his hearing before Magistrate Ferguson-Pratt yesterday.

The court was told that officers went to Mr Percentie’s residence with a search warrant around 2.30 that morning. When they searched his bedroom, officers discovered 53 wraps containing suspected cocaine on top of his ceiling fan. During their investigation, officers also seized $8,347.20 from the accused as the proceeds of crime. Percentie was arrested and taken to a nearby station. In an interview with police there, he admitted to the offence.

During the hearing, the accused was represented by attorney Ian Cargill. He told the magistrate his client was suffering from a tumor in his chest and insisted he was remorseful for his actions.

In response, Magistrate Ferguson-Pratt said she found it unfortunate that someone with an underlying health condition, like Percentie, would choose to pursue a “criminal enterprise” rather than opting to go down a “straight path”. She told Mr Percentie his medical condition was the only reason she was refraining from imposing a custodial sentence and fined him $5,000 or 12 months in jail. Magistrate Ferguson-Pratt also said the funds police confiscated from Percentie on the morning of his arrest would be forfeited to the Crown.