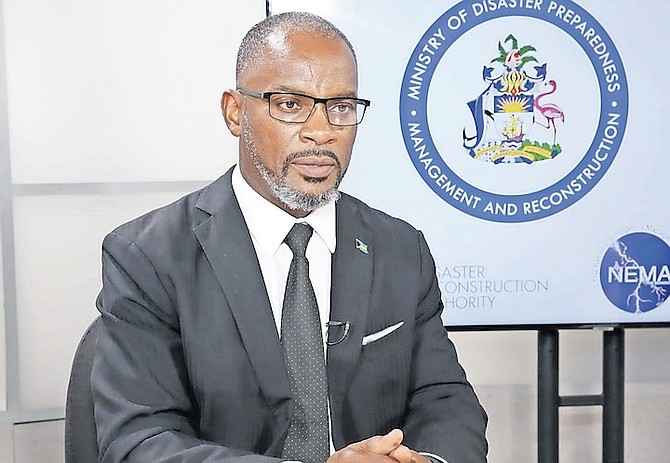 IRAM Lewis, State Minister of Disaster Preparedness, Management and Reconstruction, told Caribbean risk managers yesterday that illegal residents made up a “considerable” portion of those who died or went missing in the aftermath of Hurricane Dorian.

Dorian landed in The Bahamas on September 1 last year and devastated Abaco and Grand Bahama with gusts of over 220mph and storm surges swelling as high as 23 feet.

“On the island of Abaco, there were several unregulated, makeshift communities, which served as dwelling places for thousands of residents, primarily undocumented immigrants,” Minister Lewis said. “Most of these communities were utterly devastated, and their inhabitants represent a considerable portion of those dead or missing.

“Understanding this, post-Hurricane Dorian, the government announced a moratorium on construction in these communities primarily to ensure that if dwellers had legal rights to the land, the reconstruction of these structures would be congruent with national building codes.”

He told the conference that ensuring resilience in recovery is a must and that all these factors are noteworthy to ensure future-proofing and risk reduction.

“Further to this, to ensure resilience and the application of local knowledge and skills in a disaster zone, the Act (Disaster Reconstruction Act 2019) calls for the establishment of a Disaster Zone Reconstruction Committee which is to play a significant role in executing the functions of the DRA,” he said.

“September 1st, 2019, is a day that will be forever etched in Bahamian history.

“That is when Hurricane Dorian made landfall on Elbow Cay, Abaco, as a calamitous and cataclysmic Category Five Hurricane. The United States National Hurricane Centre noted that this tropical system was the strongest storm to make landfall in the Atlantic Basin.”

Hurricane Dorian left Central Abaco decimated and unrecognisable and moved along Grand Bahama at one mile an hour, causing the low-lying island to endure 41 hours of intense hurricane force conditions.

“The initial damage assessments for Hurricane Dorian were valued at a staggering $3.4bn, representing nearly a quarter of the country’s gross domestic product,” Minister Lewis explained. “But this amount is in no way comparable to the 74 souls that perished and the many more that remain missing today.

“Disasters are increasing worldwide at an unprecedented and unequivocal rate resulting in large-scale loss and damage to individuals, communities, infrastructure, livelihoods, and countries. Within the Caribbean region, the existing hazard landscape requires immediate and decisive action in disaster risk management.”

Minister Lewis told the conference that the story of Abaco and Grand Bahama is his main reason for being a part of the forum. He said the toll of Dorian and other super storms are reminders that Climate Change is real and can have devastating effects.

“The toll of Hurricane Dorian and other super storms remind us of the impact of our changing climate,” he continued. “In its 5th assessment report, the inter-governmental panel on climate change warned that intensified hurricanes are likely due to warmer sea surface temperatures. As a vulnerable small island developing state, The Bahamas must develop and enhance its arsenal in the war against climate change.

“To fight this battle, all of us must take careful consideration of various adaptive measures. As a region of small islands, cays, and atolls that are vulnerable and susceptible to multiple hazardous events, we can no longer sit idly by and twiddle our thumbs as our countrymen suffer.”

It is also responsible for arranging the distribution of funds or materials for construction, overseeing the restoration of government services in a disaster zone and, establishing and coordinating relationships with national and international bodies engaged with similar or ancillary pursuits.

Iram Lewis said "74 souls perished and many more remain missing" as a result of Hurricance Dorian.

Guess he believes like Minnis that the many hundreds still missing are hiding somewhere.

The Farm Road is out of control. I have family on Abaco that tells me it will reach the size of the Mudd and Peas very soon. Every one is relocating up there now, apparently.

I thought the Farm Road was also destroyed similar to the Mudd and Pigeon Peas.