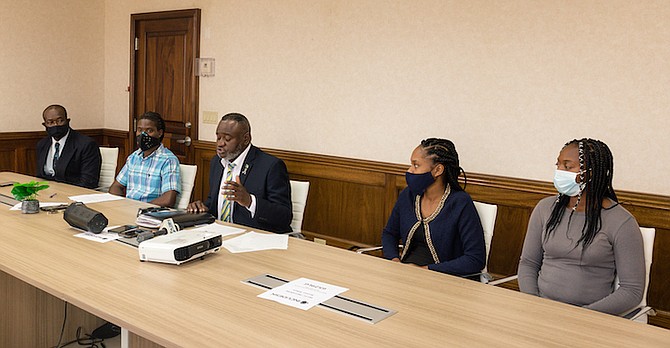 THE MEETING held yesterday to announce the plans for the Justice Labour Party to take part in the 2022 election. Photo: Donovan McIntosh

A NEW political party promising to ensure equality, justice and labour rights for all Bahamians has formed with the intention of contesting all but one seat in the 2022 general election.

The party says the only seat it will not challenge is that of Englerston MP Glenys Hanna Martin.

The Justice Labour Party is being led by Ricardo Smith, who said he intends to offer himself for the Pinewood constituency.

Last year, Mr Smith told The Tribune he was gearing up to challenge Progressive Liberal Party deputy leader Chester Cooper yet again for the opposition party’s second in command spot.

While Mr Smith did not disclose yesterday why he decided to leave the PLP to form his own party, he said his organisation is one that believes in a free market economy.

The party, he said, intends to implement a new system of government that is “philosophically different” from the Free National Movement and PLP.

“The people of this nation have been searching for positive change, for a long time now, so much so that in the past 20 years or four election cycles we have not given any of the two parties a second term,” he said at yesterday’s launch.

“But every time we voted one of the two parties in the hope that the one we voted in, would bring something new to the table to change our decaying circumstances, they failed us and gave us more of the same. I say enough now. This time I invite my fellow Bahamians to come with labour.”

The only current MP who will not be challenged is Mrs Hanna-Martin.

“It is our view that Mrs Hanna-Martin has demonstrated over the years that she is a true champion for the people of her community and we see no reason why she should not continue in office,” said Mr Smith.

He went on to claim his party is engaged in discussions with a sitting Member of Parliament to join the new JLP’s ranks.

Key areas of focus for the party includes tackling immigration, transforming local government and creating justice and equality for all.

Mr Smith also said the party will aim to ensure that the country’s labour force is lawfully protected from unfair treatment.

He continued: “On the matter of our economy, we are cognizant of the fact that the pandemic and poor financial decisions, some very questionable, by successive governments have left the economy in a dire state.”

“We are quite aware that our economy will need new innovative ideas to rebound. With this in mind when we present our overall economic platform at the JLP Conference 2021 we will unveil the prosperity agenda for all Bahamians and the passport to the good life.”

The JLP is also in support of a term limit being imposed for the prime minister.

“We are satisfied that two terms or ten years is more than enough time to complete any agenda,” Mr Smith said.

Meanwhile, as it relates to the party’s candidacy, Mr Smith said there will be a mixture of young and older, more “mature” candidates.

When asked what makes the JLP stand out from other political parties, he told reporters: “This is a labour party, our focus and our policies are far different from the regular run of the mill party. We will be focused on laws that ensure that the focus of the country are protected.”

“You may not appreciate this but in our country today, we have in these Chinese establishments – these sweatshops. That is unacceptable. It’s unfair, the competition is absolutely unfair and it cannot be allowed and we will fix that. So, you will see a different form of government.”

“At our conference 2021… the entire platform of this party will be laid out for you to see and you will see that our administration will be better suited for the commonwealth of The Bahamas.”

However, Mr Smith did not mince words while expressing his disappointment with House Speaker Halson Moultrie, calling his behaviour “deplorable” and “unacceptable”.

“I’ve seen the conduct and the behaviour of the House Speaker of Assembly. It is deplorable. It’s unacceptable and it must be condemned on every front. A Speaker must remain impartial, he must appear to be impartial, but the Speaker appears now to be advocating for or asking for things for himself.”

“I’m not saying that these are things he may not be entitled to, but it is improper for the Speaker of the House to be engaging in such behaviour and it is incumbent of the governing party to remove him forthwith.”

If his new Labor party is modeled on the current labor unions and their executives he'll be looking for more free lunch.

Get a job, Smitty.

@themessenger - Haha I was thinking the same thing. These political creatures just can't hack it out in the real world. Ricardo Smith has been in both major parties, and now is starting his own. Go get a real job dude!

A 10 year old child has better leadership skills than Ricardo

that's all they need for my vote!

This is a free country. Everyone deserves the chance to explore the possibilities. That is what makes democracy great.

I agree totally, however, I must wonder just what specific actions he would have advised the Speaker to take in his quest to secure a toilet at his office? Should he have instead waited until the HOA building was demolished like the Post Office, and simply pray that the new architect would decide (on a whim) to include one in the design?

Does he honestly believe that the first thing the Speaker did upon realizing that he did not have a toilet, was to immediately contact the press? My recollection is that the FNM has been in power since early 2017, and I only heard about this toilet thing in 2019.

The fact that we are discussing toilets in such an arena is testament to what a sorry state this country is in. I'm not sure exactly what the leader of this new Party is referring to when he says "...things he MAY NOT be entitled to..." Could we infer that the "slopping out" would continue at the prison under his reign? I mean, if the Speaker of the HOA is not "entitled" to a toilet, then I don't hold out much luck for prisoners.

zzzzzzz....with this platform the JLP are going to be an irrelevance.

More labour union trash is exactly what the Country does NOT need. It is what is already preventing us from moving forward. More misguided all for me baby while doing as little as possible in the name of a weekly salary. Labour unions were the downfall of the Mother Country!

Except Hanna-Martin's seat? What am I missing? Last I drove through Anglerston it looked almost as shabby as Centerville under Christie.

Yeah, can't figure out if they're supporting Hanna Martin or abandoning her constituents! In Either case it may serve to elevate the DNA a notch. All a waste in any case. The people have proven they don't want meaningful reform and transparency, they're happy with corruption, oligarchy, empty promises.

A lot of Bahamians love to live in poverty, it is the biggest reason why we will never get ahead.

FNM, DNA, PLP, it won't matter as long as the people's mentality is pure garbage. Bahamians will keep playing ring a round the political rosy until we die.

FrustratedBusinessman is spot on! The day we disband the two party system is the only way out of this nightmare we put ourselves in every 4 years. The time has come for us to not give anyone man that much Power. Just how you open a business, you seek the best CEO to run it, right. So we the people are the employers, so we should always have the say in everything that runs our Country, instead we go vote, then we go home and shut the door, leaving or giving the politrick-cians card blanche to do whatever they please to us, setting inhumane policies and laws, taxing us to poverty, signing us up for WTO, WHO, and all the other organizations without our approval?!!! No, this must stop....and THe Bahamas will be the first to stand up, Rise up, and say "NO MORE'! Remember, please remember, that you hire the Government and you should be able to'FIRE" them! Dame Joan Sawyer, please help us on this? What does our constitution say?. We should not have to struggle to remove a Government that is ineffective.

Can anyone say that there lives have gotten better under these Administrations? Sure for the opportunist and die hard party supporters. Every single Government worldwide should be ensuring that everyone can live a reasonable and happy and healthy life by giving them the tools and resources they need. Why vote, if your life gets harder and harder, things get more and more expensive, Governments keep taking your money in taxes, vats, even on your personal bank account? taking money from any source you make it? never giving you a break to save and enjoy life. GOd has put enough for everyone's needs but not enough for Greed! Rise up.