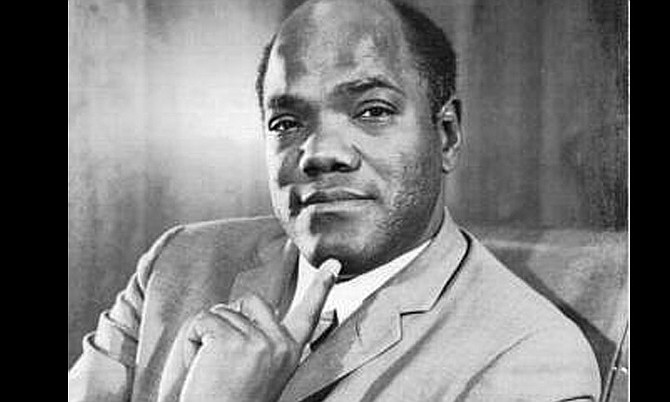 SIR Randol Fawkes, the father of labour, was posthumously named a National Hero in the 2020 National Honours.

The ceremony, which was originally to take place last month, saw many, arguably, deserving Bahamians honoured for their toils and selfless work. Joining Sir Randol in posthumous honours was the Hon Paul Adderley and Sir Alvin Braynen.

“We are most fortunate that Sir Randol, Paul Adderley, Sir Alvin Braynen and J Henry Bostwick helped to secure democracy and the rule of law in our Bahamas,” Prime Minister Minnis said. “Our greatest tribute to them is to follow their example in this and successive generations by safeguarding and upholding democratic values and norms.

“Today, we honour, posthumously, as Companions of the Order of the Bahamas, Hon Paul Adderley and Sir Alvin Braynen. We also honour, the Hon John Henry Bostwick, QC, who is still happily with us. Like Sir Randol, Messrs Adderley, Braynen and Bostwick lent their considerable talents, patriotic vigour and lifeblood to the liberation and development of the Bahamian people.”

Recognising we are not living in “ordinary times”, Prime Minister Minnis mentioned the toll COVID-19 has taken on the world.

“We find ourselves in an unprecedented time in the contemporary Bahamas,” he said. “The COVID-19 pandemic has resulted in the deaths or ill-health of millions around the world, including the deaths and infection of a number of our fellow citizens. The pandemic has caused unprecedented economic and social distress and dislocation.

“Yet, in the midst of the pandemic, it is good that we are here today to acknowledge and to celebrate noteworthy Bahamians who have given exceptional service and contributed significantly to national development. Because of the pandemic, today’s ceremony is necessarily brief and considerably smaller, with various health measures utilized to safeguard attendees.”

The Prime Minister quoted the Father of Labour as saying the following: “Once I had found my people, I could have no peace of mind until I had become a part of their struggle and transmitted their heritage to future generations.”

He said Sir Randol’s words represent the courage and dedication to the country of the other men and women honoured at the ceremony.

“Each, in his own way, was involved in the political and social struggle for equality and the advancement of a sovereign and free people,” the Prime Minister said continuing, “they were among that generation of Bahamians who gave fully of themselves in the promotion of the dignity of all Bahamians, regardless of creed or circumstance of birth.

“They did not simply debate the big questions of the day from the sidelines. They were not armchair critics who refused the call of history to make a difference and to make a vital contribution. All of these men read history and made history. These fine Bahamians entered the arena and helped to entrench a vibrant parliamentary democracy and two-party system, which are among the pillars of our democratic heritage.”

He noted that as political leaders, parliamentarians, attorneys and Bahamian citizens, they recognised that the rule of law is at the heart of a vibrant democracy that protects the rights of all.

Justice Claire Hepburn, Justice Jeanne Thompson and Justice Rhonda Bain were also honoured as members of the Order of The Bahamas.

“We honour them as jurists and as women of integrity,” the prime minister said. “We also honour them for their varied contributions to national life. Not so long ago, indeed during many of our lifetimes, there were few Bahamians as judges of the Supreme Court. Few women served as Supreme Court Justices.

“It is worth celebrating and noteworthy that the Hon. Justices Hepburn, Thompson and Bain exemplify the quality of Bahamian jurists who have populated the Courts in an independent Bahamas.”

The Prime Minister praised them as three individuals who have each given a lifetime of service to The Bahamas in their respective fields of endeavour and through community service in general.

When will MORE non-politicians be recognized as having made MORE contributions to this country than most of these blood-sucking politicians??????? .......... Sir Randol was an exception, as he was mainly a trade unionist and then he entered politics to make a difference for the working class (Pindling ended that) ............... unlike Shane Gibson and his ilk (today).

So...what is the purpose of having two systems? Why bother having these if we are still going to be using the British system as well?