‘When Will We Be Told About Probe Into Seabed Damage?’ 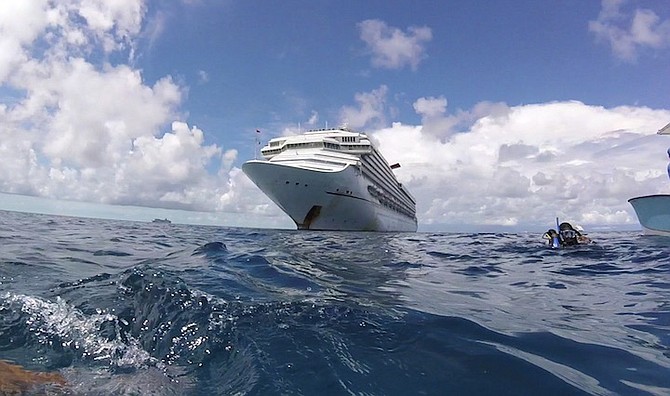 MARINE biologists, scientists, and professional divers representing The Bahamas National Trust and other local organisations took part in a rapid marine assessment of the seabed in the Northern Berry Islands on September 8.

ENVIRONMENTAL activists are still awaiting results of an investigation by a government-appointed task force into alleged seabed damage by cruise ships.

In September, local environmentalists complained about the country’s seabed being severely damaged by chains and anchors used to dock cruise ships when they arrive at our shores. Shortly after, the Ministries of Environment and Agriculture and Fisheries established that some damage had been caused and announced a fuller investigation would be carried out.

“I don’t have any updates on that,” said Eric Carey, executive director of the Bahamas National Trust, yesterday. “They have not sent anything to the Trust. The only thing I know is that a task force was formed and we have had no further updates since then.”

ReEarth spokesperson and environment activist Sam Duncombe has also had not heard anything about results of the investigation.

“I’m all for the task force if it actually gets something done,” Ms Duncombe said. “They have not shared any information with ReEarth. I don’t know if they shared any information with the (Bahamas) National Trust, because I know the National Trust had spoken out about it. So I think that we need to look at making these cruise ships move into places where they are at least not next to a facility and not dragging up all the coral.

“Where are the fines and where are the court cases and all the things we need to be doing? We want to have this illusion of lots of tourists and all of that, but they come with a very heavy price. Cruise ship tourists come with a huge price. They sail away with all the profits and we get left with all of the burden and the damage. It would be fantastic if something does come out of it and these cruise ship companies are fined.”

Ms Duncombe recalled a previous matter where a cruise line was accused of dumping waste into Bahamian waters. There was a promise to go after the cruise line, she said, but to date, nothing has happened.

“They told us they were going to go after Carnival for dumping in our waters and that was a year and a half ago and I haven’t seen anything yet,” Ms Duncombe continued. “Coral takes years and years to grow and to impact a reef means you have impacted all the reefs around that reef and when you look at how many cruise ships are basically docked in our waters…”

She continued by raising the question of how valuable or invaluable the cruise ship industry might be to The Bahamas.

“Who is monitoring all these ships and making sure their chains and anchors are not dragging on the sea bed?” Ms Duncombe asked. From the Ministry of Tourism’s own stats, 75 percent of our tourists are cruise ship passengers and they only account for 11 percent of the tourist dollar spent.

“Whereas 25 percent stay in hotels, eat in our restaurants, go shopping, go on tours, do all these activities and they represent 89 percent of the tourist dollar spent here. So which tourist should we be following? This is actually the perfect time for us to rethink before we restart the cruise industry.”

The ReEarth activist reflected further on the cruise industry, bringing up the preparation of the arrival of the “Oasis of the Sea” to The Bahamas.

“Remember a couple of years ago we had to go dredge out the harbour for the Oasis of the Sea because it was a bigger ship and we needed bigger ships,” she said. “That ship doesn’t even come here anymore. So we spent millions and millions of dollars doing that only to have that ship not come here.

The Tribune reached out to the Ministers of Environment and Agriculture and Fisheries, but neither responded.

There will be no probe. the FNM Government is very busy taking plastic bags from poor Bahamians so they can walk with their purchases in their hands,