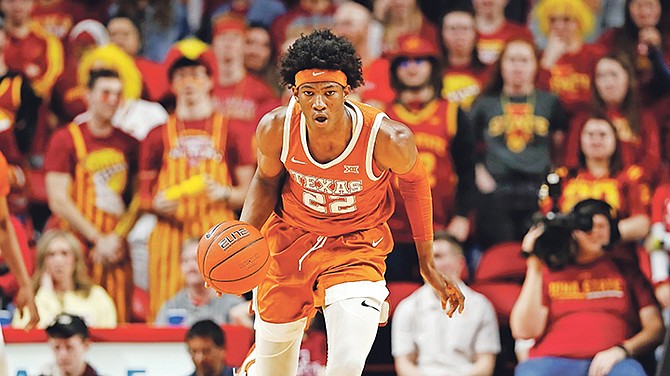 THE NCAA Division I basketball season tips off Wednesday, November 25 and several Bahamian players are scheduled to compete on the opening day of the COVID-19-shortened season.

Jones and the No.19 ranked Longhorns will open the season against the Texas Rio Grande Valley Vaqueros at the Frank Erwin Center in Austin, Texas, at 8pm.

The Longhorns have been projected to finish No.4 in the Big 12, according to the league’s coaches poll.

Texas concluded last season 19-12 (9-9 in the Big 12). Along with Jones, they return virtually every rotation player from a season ago and welcome five-star prospect Greg Brown to a loaded frontcourt.

For the season, Jones - a 6’11” forward - averaged 3.6 points and 3.2 rebounds per game and has recently been listed as a highly coveted prospect for the 2021 NBA Draft by Sports Illustrated.

Davis will make his Panthers debut when FIU faces the University of Fort Lauderdale Eagles at the Ocean Bank Convocation Center in Miami, Florida.

Davis will conclude his collegiate basketball career playing the closest he’s been to the Bahamas since he left years ago to complete his high school education. The 6’4” wing opted to transfer from the Texas-Arlington Mavericks following a two-year stint in the Sun Belt Conference.

Miller will also make his debut with a new programme following a transfer when the Eagles face the Florida A and M Rattlers at 7pm at the Alico Arena in Fort Myers, Florida.

Miller was granted an NCAA waiver for immediate eligibility following his transfer from Ole Miss to FGCU in June. According to the Eagles, Miller became the sixth newcomer for the Eagles roster heading into the 2020-21 season, joining four early signees and one graduate transfer. The Eagles will return 70 percent of its scoring back in the line-up along with seven players who saw significant action in 25-or-more games during the 2019-20 season. FGCU competes in the Atlantic Sun Conference. They come off a 10-22 season that concluded with a loss in the quarterfinals of the conference tournament.

This is the third season at the helm for McPhee- McCuin as head coach of the Ole Miss Rebels women’s basketball programme. They open the season at 7pm against Northwestern State at home at the Pavilion at Ole Miss in Oxford, Mississippi.

McPhee-McCuin welcomes No.1 recruiting class in the SEC and No.13 class in the nation. The team will also see the return of Bahamian recruit Valerie Nesbitt to the programme for her senior season.

Nairn and the No.13 ranked Spartans open the season at 6pm against Eastern Michigan at the Breslin Center in East Lansing, Michigan.

They finished last season with a 22-9 record (14-6 in the Big Ten), tied for first place. The Spartans return several key starters and players from last year’s team.

Nairn played four seasons at Michigan State and was part of two Big Ten championship teams while reaching the Final Four in his freshman season of 2015. He joined the programme as a graduate assistant in 2019.

McLean and the No.17 ranked Houston Cougars open the season at 3pm against the Lamar Cardinals at the Fertitta Center in Houston, Texas.

The Cougars return four starters. They finished last season with a 23-8 overall record (13-5 in the AAC).

McClean played for the Cougars from 2010-15. He entered the pro ranks with the Cougars in internal operations during the 2015- 16 season and joined the full-time staff as assistant director for player development for the 2016-17 season.