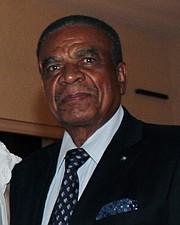 FORMER House of Assembly Speaker Oswald Ingraham died on Monday at the age of 82.

Leader of the Progressive Liberal Party Philip “Brave” Davis, in a statement said he is mourning a good friend, who was a gracious and consummate statesman.

Ingraham, who was Speaker during the second Christie Administration, also served as Deputy Governor-General. He was also the Member of Parliament for South Eleuthera for 10 years, from 2002-2012.

“Oswald Ingraham lived a full life and made his contributions to The Bahamas in both the private and public sectors,” Mr Davis said. “We thank him for his service as he transitions into eternity. I am saddened to learn of the passing of a good friend, a parliamentary colleague and businessman, Oswald Ingraham.

“Oswald was fair in his rulings as Speaker and always protected the rights of the opposition, allowing them to have their say when the governing caucus would eventually have their way.”

Mr Davis touted Ingraham as an ardent supporter of the progressive movement.

“This native of Tarpum Bay, South Eleuthera would go on to represent his community in the halls of Parliament as the representative for South Eleuthera from 2002 and 2012 and served as the Speaker of the House of Assembly from 2002 to 2007,” the PLP leader said.

“He would also go on to serve as Deputy Governor General between 2012 and 2017 where he presided over several official state recognised ceremonies. At all times Oswald was gracious in his deportment and the consummate statesman.”

Ingraham was an entrepreneur in the tourism and hospitality industry, operating a small hotel in his constituency of South Eleuthera.

“Death is not a full stop, but a mere comma in the sentence of life, therefore, Oswald may be absent in the flesh but present in the spirit as he lives on in the hearts and minds of those who knew and loved him,” Mr Davis said, sending condolences on behalf of his wife and party executives and members to Ingraham’s family.

Former Prime Minister and PLP leader Perry Christie also said he is in mourning over the death of a treasured friend.

“We have been political comrades for some forty years and shared a close common kinship with Tarpum Bay, Eleuthera,” Mr Christie said in a statement.

“Oswald Ingraham was a towering figure in the life of Eleuthera, where he achieved prominence and distinction in a variety of spheres. He was an outstanding Christian leader in the community and was highly regarded and admired for his success as a businessman and community leader. His reputation for integrity, decency, and productivity was never questioned. He was, in every sense of the term, a role model for the Island of Eleuthera, where he was born and spent his entire life.”

Noting that Ingraham entered frontline politics at a later stage in life, Mr Christie said he more than made up for his “late start” by the “exemplary service that he rendered in the House of Assembly as the representative for South Eleuthera”. “He later achieved an even greater distinction as Speaker of the House of Assembly and enjoyed an enviable reputation for his fairness and discipline in presiding over the proceedings of the lower body of the legislature,” Mr Christie said.

“Still, later I was pleased that Mr Ingraham accepted my invitation to serve on numerous occasions as Deputy to the Governor-General. In performing this role, Mr Ingraham always acquitted himself with complete distinction. He upheld the dignity of this high constitutional office whenever he was called upon to fill a temporary vacancy, and he attended his duties in this regard with efficiency, reliability, and unfailing courtesy to one and all.

“Finally, on a more personal note, I am deeply indebted to the support and encouragement that Oswald extended to me all through my years before, during, and after his involvement in public life. He was a great friend and a loyal and dependable ally through thick and thin, in good times and in bad.”

Mr Ingraham leaves behind his wife, Marie, several children and extended family in the community of Tarpum Bay, Eleuthera.

According to the Eleutheran newspaper, a family member said he had been ill for the past two years.